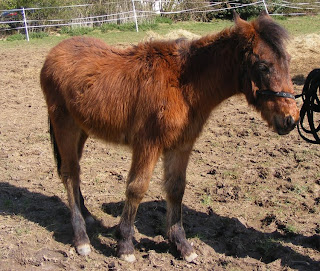 I suppose it comes with the territory but I think I hear more about abuse of horses doing this job than when I had my head neatly buried in the sand. Okay we would get the odd RSPCA case when I worked for the Courts Service but now I hear about something awful nearly every day.

The little chap above has been sold SEVEN times since he went through Beaulieu Road Sales last year through no fault of his own. He's actually a personable little thing. There is much coo-ing over the new foals that are beginning to arrive on the Forest at the moment but the same people are prepared to put them at risk of being bought by anyone, anyone at all, when they put them through the sales. It is bad enough having to sell a horse to someone you think you know or have thoroughly vetted only to find they are not the person you thought they were or they have sold your horse on within days, but you have no control whatsoever if they go throught the sales yard.

He has now fallen on his feet at a place which also has a group of the French rescue horses that people have brought over and then haven't got a clue how to handle. Most of them turn out to be pregnant and semi-feral. It's awful when horses have to be rescued from their rescuers.

At my loading course at the weekend, I heard first hand about a horse that had been loaded to go to his first show. The owner hadn't practised at all. The transporter pulled the horse into the horse box with an electric winch attached to the horse's headcollar whilst the owner was encouraged to hit and kick it. This winch is designed to pull carcasses and inanimate objects into a truck, not to forcibly drag a live horse. I have reported this to World Horse Welfare this morning and hope that they will investigate. I shall say no more on it for now.
Posted by Loisaba Wildlife Conservancy at 2:52 PM