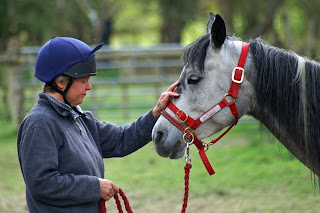 I told you I was tired! Here I seem to have my eyes closed while I work with Zuleeka. Having been rained off all day Monday, it was back to work on Tuesday, long reining Zuleeka first and then working with both starters. Fern is now being ridden off her bit at walk, trot and canter and going off on her own with Sheila on board (Julie is off on her Stage I Five Day Course at Hartsop). Rosie has now been ridden out on the Forest twice and today went unclipped for the first time.

Thanks for the lesson, it has had another huge impact on us - we did long reining in the field, as before with you, no problems, so I just went further into the corners, and when we got to the exit into the other field she napped, just a small one, so we did that in circles, until it was no bother both ways, amazing. (LB, owner of Zuleeka).

I had a very early start this morning with a loading horse first and then a lightly handled Andulusian cross youngster. The loading horse has had a nasty incident inside a lorry and has previously lain down on the ramp - she was loading in and out of a trailer with soft pressure and release by 10 o'clock this morning and enjoying some food when she was in there. The Spanish cross filly accepted her headcollar and then I taught her to follow a pressure by using a towel around her neck rather than direct from her head - she had previously reacted badly to pressure on the headcollar. I finished that session by asking her to move towards me using both the towel pressure and a slight pressure on her headcollar; by that time she had got the hang of it and didn't object to the pressure on her nose.