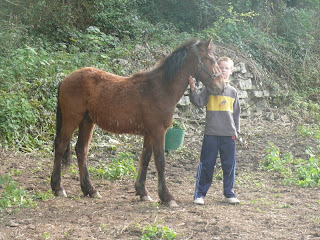 Hi Sarah,I came to your demo at the Caspian Stud last weekend (my name's Sam, I won your book in the raffle and I was with Carol).I really enjoyed the demo, and implemented some of your work with my part bred welsh yearling filly, who's been getting rather 'in your face' lately!It REALLY came in to it's own today though - I heard of a little colt who was going to end up at market (and probably in a tin) and being a soft touch, I said I'd take him. Went to fetch him today. When we got to the field, I asked the owner if he'd worn a headcollar, and he said yes, as he stuck his fingers up the poor foal's nostrils and grabbed his top lip, and went to force the headcollar on him. He was rather affronted at this, as up until then he'd been standing quietly next to me having a scratch. I tactfully (unusual for me) suggested that I put his headcollar on, as he'd have to get used to me. Using your 'advance and retreat' and putting the headcollar on backwards first, I had it on him in about 10 minutes, leading quietly within another 10, and he walked happily into the trailer with me too. I'd dread to think how his (now ex) owner was going to load him! So, here he is (nameless as yet) with my youngest, and he says 'thank you'

(Update 26th April: I desperately need to trim his front feet - they don't look too bad in the pic above they look like pretty poor close up. Problem is, I don't think he's ever had his legs touched. On Friday, if I went near his legs, he'd run backwards and kick out. Looking for the quickest but least stressful way of getting him used to having his feet handled, I again fell back on some advice from Sarah. At the demo, she said that those foals that were worked until they had a headcollar on (with rest breaks) did better than those that had done a little each day. This is how I've been teaching my yearling - only 10 minutes or so each day. But I decided to have a go with Sarah's method, see if I could get quicker results.Well, on Saturday, with several sessions of about 20 minutes at a time, he let me touch his feet, this morning he let me pick his feet up, and this afternoon, he held them up long enough for me to pick them out! He didn't seem to mind the extra work, as long as I was careful not to stress him, he was more than happy to be obliging for a reward of some scratches.Thankfully the feet themselves aren't distorted, they're simply overgrown so once I can teach him to hold his feet up for just a little longer, I can get my nippers in there and I'm sure he'll be much more comfortable.I'm so chuffed!)

Fern went out for a ride with me on Petra this evening and once again she was perfect. Rosie was also sat on and seemed very relaxed She will go out on her first ride on the Forest on Monday. Sheila will be on board as Julie is off on her 5 day foundation course with IH.
Posted by Loisaba Wildlife Conservancy at 9:01 PM