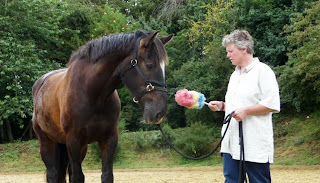 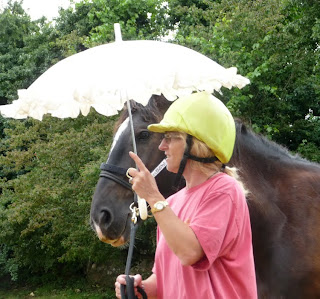 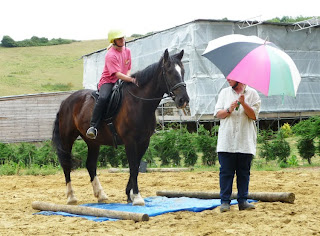 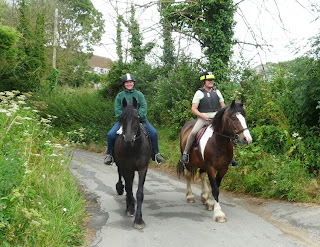 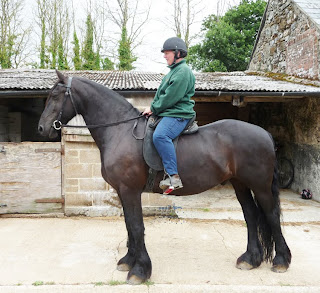 A 12 hour stint today from leaving home to getting back again. However, another great day on the Isle of Wight where I met William, another fabulous black Irish cob. He has a fantastic temperament and is a real innocent of this world having, fortunately, never been treated badly. Today we went through basic groundwork and then some desensitisation before doing some gentle ridden work to finish. This one could become a police horse if he were tall enough.
Wouter (bottom two pictures), on the other hand, feels plenty tall enough. despite being 15.2 ish. It was a real treat to ride him as I don't often get to ride clients' horses. The Isle of Wight is a particularly beautiful when seen through ears like these. I'd been asked to see whether I could help with a little ridden problem. When Wouter is in the lead, he sometimes starts to go backwards, bumping in to his companion and making it difficult to send either of them forward. Neither rider wants to hit and yet kicking made the horse cling to each other even more. I suggested using a wip-wop rope as it would matter even if it caught the other horse by accident. I was asked to give it a try. When I rode Wouter, I felt that his handbrake was stuck on and that actually he was losing confidence when he was asked to take the lead. My final recommendation was to use the wip wop if he did actually go backwards and to unstick the handbrake a little but also to make sure that there was a change of leader at regular intervals so that he was given a chance to lower his adrenalin and a sort of reward for having the courage to go first. By giving a horse a mental release before he makes the decison to force one for himself, you can build up a lot of trust and confidence.
E-mail received 22.8.10: "Hi Sarah, hope that you are having a good summer .It was really good to see you again and the wip wop method and taking turns in taking the lead has worked straight away Carol and I no longer have to worry about losing a leg with their rubbing. Another big problem has been resolved thank you." Jasmin L.
Posted by Loisaba Wildlife Conservancy at 11:14 PM