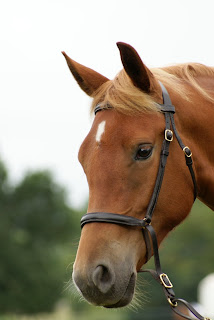 David and I have been married for eight years today. We had a perfect day - a lie in followed by the MotoGP (Valentino Rossi back after injury) and most exciting of all, a ride out together on Chancer and Theoden for the very first time. You might think we are taking things extremely slowly with both horses but with a ratio of three to one of novices to experienced, it seems to be the right thing to do. It's great to have horses that move at the same speed as Petra Pistonlegs leaves Chancer miles behind if I don't stop every once in a while. Then it was off to the Sherekhan to collect an Indian meal and back in time for Top Gear. That's called a balanced life.

I started some clicker training with Theoden yesterday as I want to do stretching exercises with him. He's the first horse where I really have had to teach him with a barrier between us. If I don't let him have the food directly from the bumbag, he would turn round to kick me and without the fence there I think he would carry it through. I am hoping that by being utterly consistent and only giving him a click and a treat for touching the feather duster, he will stop trying to cut out the middle man and relax about the whole thing. Otherwise I'm afraid he will forfeit the right to be clicker trained. I don't think it is any coincidence that he was a bit lean when I got him and people living around his field had been giving him hand treats. I think he found that a bit of intimidation got them to give up the food more quickly. He was certainly very aggressive around food when he first came.

In the meantime, Jack now has his feet picked out easily and it will only be a matter of time before he can have them trimmed. He also had his first bath complete with bubbles and fly spray, both without batting an eyelid. Funny what he can and can't cope with and he never ceases to amaze me.

Mystery pony is also having her feet picked up for extended periods of time with and without her headcollar on. She's due to have her feet trimmed on 10th August so now we are practising different people, different positions and lots of different clanks and bangs around her.

Jenny's Mum's pony, Poppy, who was at death's door just a couple of months ago (sorry for all the cliches) came fourth at Cadnam's Native Pony Gala today (see picture) and Necator came first in his Iberian class at Dorset Charity Show yesterday.
Posted by Loisaba Wildlife Conservancy at 9:33 PM