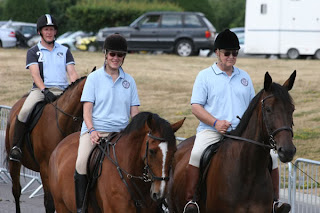 This picture was taken at The Help For Heroes Sponsored Ride at Windsor Great Park. The riders are Aud and Michael, the horses Victor and Cruz. It was an amazing feat for all concerned to take part in this ride, not only because Audrey has calmed Victor down enough to go round, but also because Michael has been undergoing aggressive chemotherapy and was riding a brand new horse. On Wednesday I had the pleasure of meeting Cruz but infortunately not Michael who has had to go into hospital again. Considering this horse is only six and stands at 18 h.h., he's amazing. His groundwork was great even if he didn't always know where his feet were!

Earlier in the day I had been working with a six week old Quarter Horse filly. She had plenty to say about what she does and doesn't like and what she does and doesn't accept. She was a good example of cause and effective-ness. Once again I used fabric to start to desensitise her face but not before I had used it on Mum to get her permission to be in the stable and touching her foal.
Posted by Loisaba Wildlife Conservancy at 9:56 PM