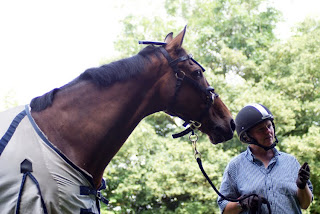 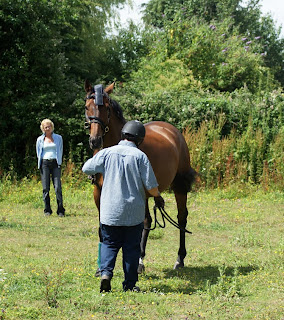 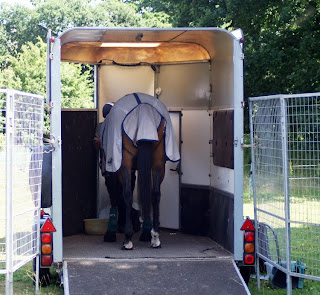 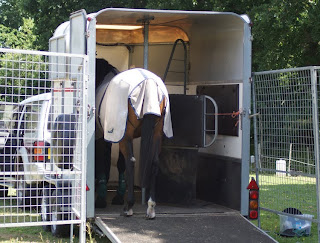 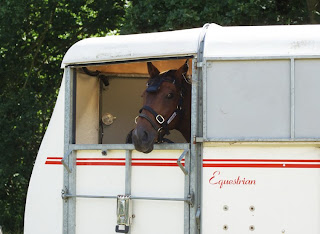 Nikki and I have worked with three loaders in two days. The first, a big chestnut mare, is one I "loaded to go" last autumn when she came back from her loan home. Her owner has decided to see if she can resolve her loading fears before she is sold to a new home. It took quite a while to even calm her down enough to approach the trailer and she had a fine line in rearing. Her field is at the top of a blowy hill where she is surrounded by cows and pigs that she is afraid of and her companion who looks on and urges her not to go anywhere. However, she consented to look at the trailer and then we began to gently work on the ramp where she offered each foot in turn until she was eventually standing on it with all four feet. We ended the session when she voluntarily walked forward half way into the trailer. The trailer itself was not ideal - the manufacturers may say thatn Ifor 505 will accomodate a 16.2 hh horse but it won't take one that has a high head carriage. Accordingly the owner is going to see if she can borrow a taller one for our next session.
Yesterday we had a celestial day, working with Sky (pictured above) and then Mars. Sky is a recent acquisition for his owner and arrived with all of his ribs showing. He looks fantastic now and has got over a lot of his so-called issues already. However, the first clue as to how he feels about loading is his tendency to rush out of his stable door. Horses that have knocked themselves often do this and for the same reason we didn't unload him out of the front ramp on this particular session. His loading was pretty copybook and nect time we will work on closing up the back bars, front bars and ramp. He is another one that is afraid of what is going on behind him which points to him having been got at with a whip in his past.
As ever, Mars was particularly sensitive to change, and a new position for the trailer, a different time of day and lots of horrid horse flies, which meant that we had to work on simply consolidating what we had done before. He did have the partition fully closed and closer to him.

Posted by Loisaba Wildlife Conservancy at 7:45 AM