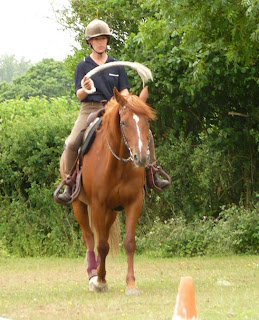 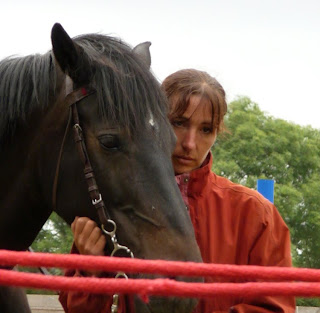 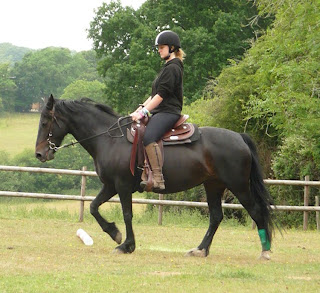 With David on Chancer, Jenny on Theoden and Nikki on Petra there was no horse for me to ride for a lesson with Amanda (Barton). Nevertheless I gained a huge amount from just watching her work with the three of them. David worked on his steering, asking Chancer to be more responsive by giving him more direction all of the time; until now it has been like piloting a cruise liner. Jenny worked on taking Theoden's handbrake off - asking him to be more responsive, more quickly. The whip-whop rope is used as a visual cue and not to hit. Nikki has learned to ride through Pony Club and traditional riding schools so the lesson was a revalation to her. She breathed for the first time in 19 years! It was fascinating to watch Petra mirror tenfold her levels of tension so that a hurried, worried horse turned into a relaxed, nonchalant one. No need ever to take Petra's handbrake off - she wasn't fitted with one. Nikki described her lesson as awesome!!
In the middle photo, Amanda is explaining how we set up horses up to pull and lean.
Posted by Loisaba Wildlife Conservancy at 7:29 AM