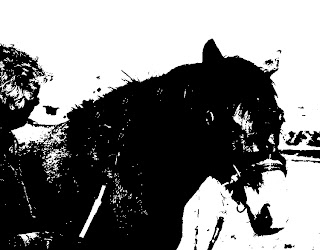 Mystery was a pony that ticked all the boxes. Well bred, five year's old and with bags of athleticism, the owner's ultimate dream was to train her for showjumping and cross country. However it appears that there have been gaps in her earlier education, perhaps things done in a hurried or forceful way, which have left her ambivalent about human contact and frightened of things happening on both sides of her at once. These problems manifested themselves the first time she went riding on the Forest. Stepping over a tiny branch, she panicked and fled and went home, leaving the owner, who we will call Iona, on the floor. Good news that she already thought of Iona's yard as home but not such good news on the cross country front! A couple of days later Iona thought she would take her back to basics and attached a long rein to her in preparation for long reining. Bearing in mind that this pony had probably been lunged, Iona didn't anticipate any problems with just the one rein and would have taken precautions about attaching the second line. Too late, Mystery took fright at just one rein and fled, galloping around the field for some time before being calm enough to catch again. So, had she been lunged and if so, what had happened to make her that scared of just one rein? When the farrier came, she bolted and jumped the fence. Lots of work to do here then but an owner that is prepared for the long haul.
In this case, Iona is perfectly capable of doing all of this work herself, but the emotional attachment to the horse and the desire not to inadvertently reinforce any of this behaviour means that we will be working in partnership. My first priority is to inject some fun into her training and to show her just how brave she can be. Clicker training, as I have said before, is perfect for the "self conscious" horse. I don't mean that she blushes all the time - simply that she has become pre-occupied with what things mean for her body and the need to flee if threatened. It is so significant that she is already positively offering me her head and her feet and that she is seeing that life can be fun. She needs her sense of humour restored.
Posted by Loisaba Wildlife Conservancy at 6:23 AM