An extremely enjoyable day today despite the weather. Lisa, cares for two twenty-two year old ponies in exchange for somewhere to keep her own ponies. One of the ponies is still completely wild having had a rough time at times in the past when people have tried to break him to ride. She explained that she was unable to touch him but he was "crawling in lice and has been rubbing himself raw." and she wondered on Facebook whether anyone had a mobile crush in the area.

We arrived at Lisa's at 10 o'clock this morning and set up a large squarish pen out of 16 round pen panels. Fortunately the ponies were willing to go inside it to have their feed and we quietly closed the gates behind them.

We had two options: to just get the job done which would have meant trapping him within a very small space and applying the Deosect solution or going about it the No Fear, No Force way. Fortunately Lisa had opted for the second choice. Much easier to teach a horse to have tricky jobs done if you have done the pleasant jobs first.

After some initial work to assess both ponies and whether it was going to be possible to work with Vino in the presence of his friend, I decided that Amigo needed to be let out but given some hay so that he would stay reasonably close. 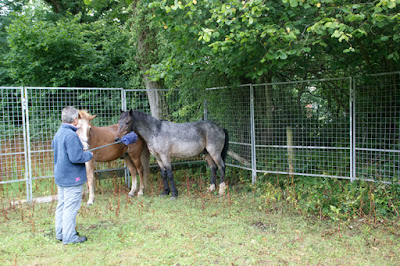 Lisa had been advised to shut Vino in her field shelter but has been worried that he would injure himself. At first he was very mobile in the pen but he did settle fairly quickly and began to understand the 'touch and move away' technique really well. 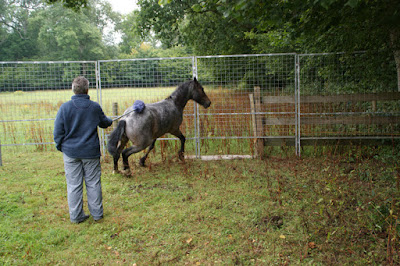 He worked out that he was much more comfortable with me on his right hand side rather than the left side that he had originally offered. 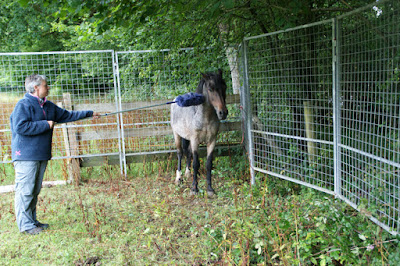 With my feather duster at its longest length I began to touch him. He allowed touch at his head first... 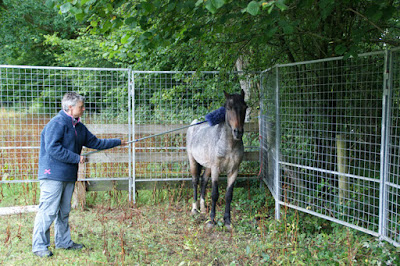 ...and then I worked slowly towards his withers...and then along to his bottom. 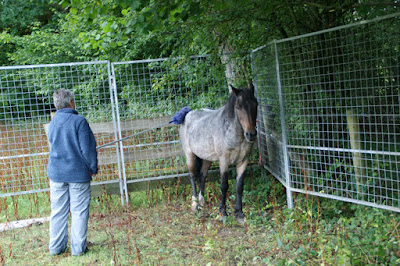 With the feather duster still massaging his neck, I began to see whether he would accept his first hand... 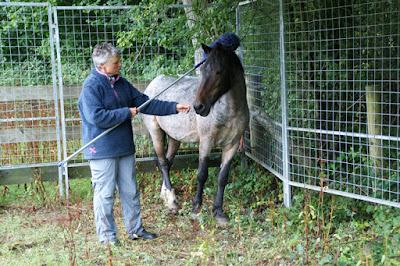 ...and then began to rub him. He is quite an itchy boy so seemed to really like this. 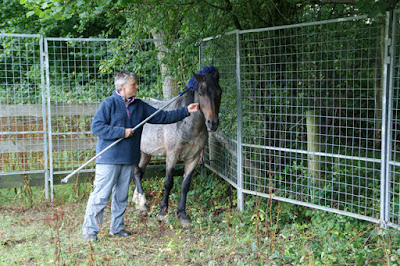 Face first and then his neck. 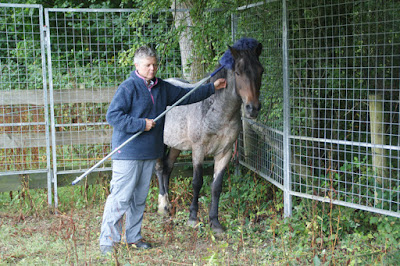 Lisa took over from me to repeat all of that work and the really fantastic news for both of them is she is an excellent copycat. She has just the right attitude, energy, and love around these ponies. 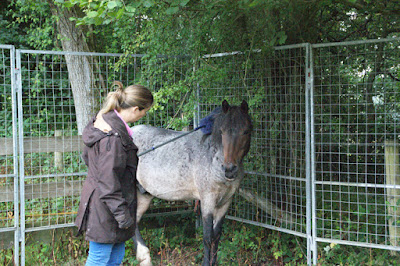 After lunch, with the rain teeming down, we started work again and I began to introduce clickered treats. 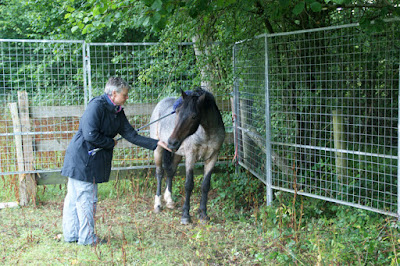 Within moments we were back to where we had left off... 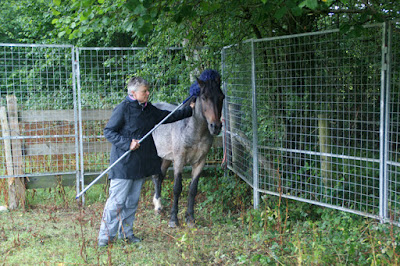 ...and he is accepting my hand at his withers too. 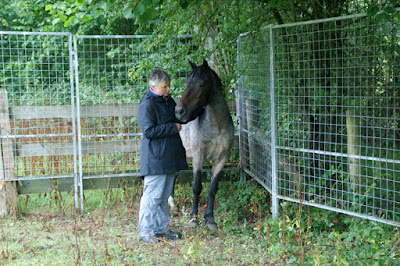 Once again LIsa takes over and she puts her hand on him for the first time. These moments can be very emotional. 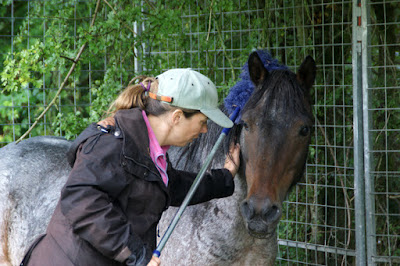 Vino wants to know where the air comes out of Lisa's face! 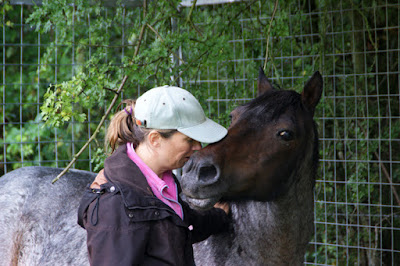 Next I started to rub with the soft scarf. 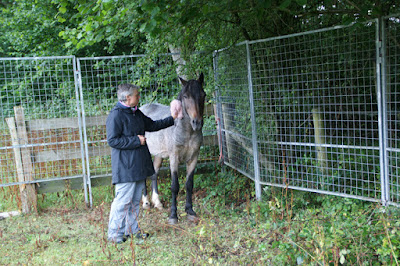 Unbelievably he accepted over his neck really easily even though he hadn't yet had any work done on his left side. 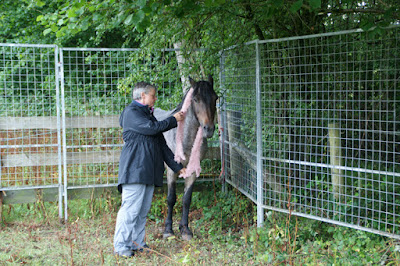 He loved having his underjaw rubbed with the scarf... 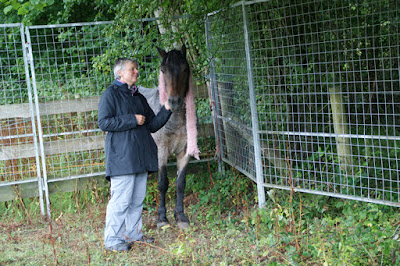 ...and the centre of his forehead where he has quite a bald patch from rubbing. 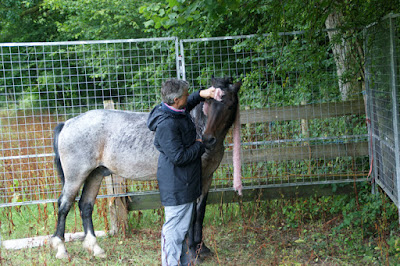 By now he was starting to feel like quite an affectionate pony. 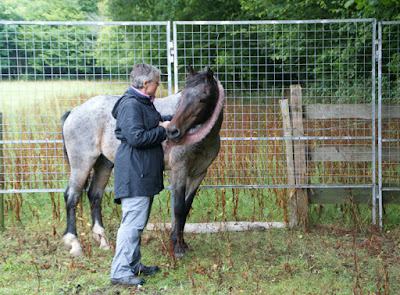 Lisa consolidated all of this work again and he was equally as responsive with her... 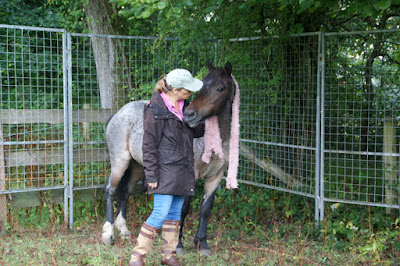 ...but he really is hopeless at taking treats from the hand, taking your whole hand into his mouth before removing the treats and then spitting it back out again. 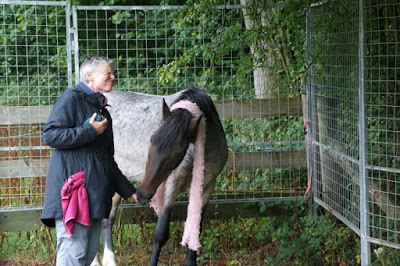 I haven't told David yet that I have ripped up his favourite car drying towel but I needed something absorbent to apply the Deosect with. 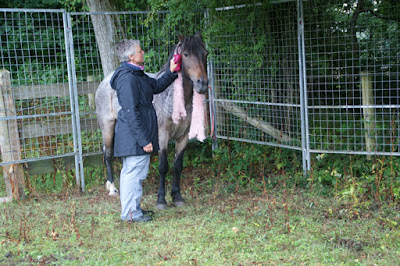 Being a bit damp already he didn't seem to mind when I applied a dilute solution of Deosect even though it smells horrible. Making sure it didn't drip I managed to rub some onto his forehead, and surreptitiously got some on the other side of his neck, back and bottom. 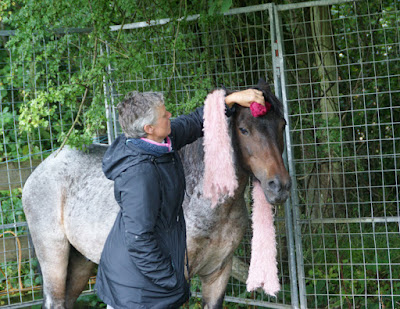 To finish I took advantage of him offering me his left hand side for the first time. Hopefully this calm and pleasant experience will set him up for the next dose of de-louser in a fortnight's time and to start to accept people touching him more regularly. 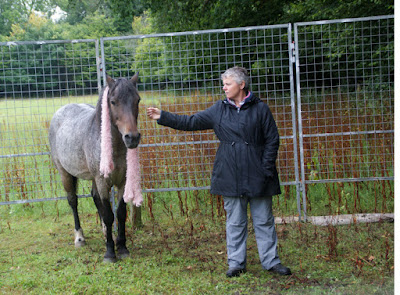 The scarf and feather duster have had a good scrub this evening so that I don't introduce his old lice to his new ones when I see him next! "And so you see I have come to doubt, all that I once held as true, I stand alone without beliefs, the only truth I know is you." Simon and Garfunkel