I have been kept sound and sane by a number of visitors week including Lorraine and Lou, even though with my thumb and Lou's broken leg we looked like an episode of Casualty.


Not only did Lorraine look after the two of us but she also provided me with today's blog...

"I rode my first pony at the tender age of seven. My very non-horsey parents allowed me to go with a school friend and unfortunately I became hooked within the first ten minutes. I asked every Christmas and every birthday for a horse of my own but to no avail. I worked anywhere that would have me with horses and saved every penny I could lay my hands on. When I was fourteen I worked for a local dealer and, having told him that I was sixteen, he let me buy an unbroken skewbald mare from him for £80. I had no more money, no field, and no clue what would happen from there on so had to tell my parents. They marched me back to his yard to get my money back so I owned my first horse for an hour and forty minutes!

I 'legally' bought a horse when I was thirty-four, but due to my marriage breakdown had a ten year gap. I met Louise when she had just bought Bear and evily she enticed me with comments like, "Wouldn't it be nice if you got one and we shared a field?" Later I was travelling from Yarmouth to Lymington on the Isle of Wight Ferry when this picture sent via Facebook popped up... 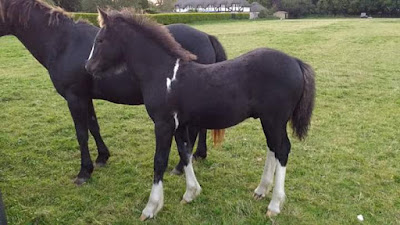 There was immediately a disconnection between my fingers and my brain as I asked whether he was still available and where he was. Yes he is and he is in Lymington! I am sure you understand the fact that two hours later he was mine was not really my fault? The “How was your day at work dear” conversation that evening was a little different to normal. 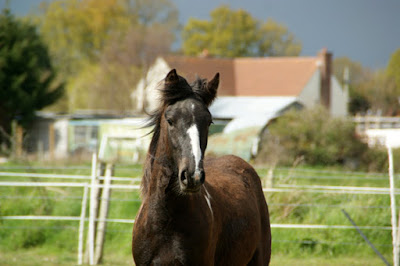 
He is turning into a fine young man and despite the fact he will probably out live me I love him to bits."
Posted by Loisaba Wildlife Conservancy at 6:21 PM