Ending the year with Kerry's guest blog about her wonderful and lucky Exmoor Ponies, Hazel and Finn. 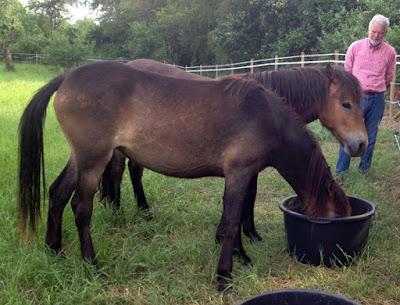 The road to Sarah and the story of our ponies has been a long one but started when a man knocked on our door one Sunday morning to ask if we wanted to buy his parents' field which joined the bottom of our garden. Chris and I live in Germany on the border with Luxembourg in converted railway water towers. After a series of negotiations the field became ours. The field was long neglected and our first job was to cut down the huge rotten fruit trees, clear the weeds, seed it, and fertilise the land. As a child and a teenager I had been horse mad and always thought I'd have a horse one day. University, travel, jobs, moving had all intervened but now there was a field to put one in .... except of course it needed to be at least two so the horse wasn't alone.

By chance I found out about some needy Exmoor Ponies in the Netherlands that were part of a conservation grazing project. Thirty seven of them were due to be culled. Homes were being sought for them by a lady who was trying to save them from a very early departure from life. So, one hundred fence posts later all hammered in by hand, and after Chris had fully studied the electric fence manual, Finn and Hazel duly arrived in Germany as semi feral Exmoors.

By this time I had started doing a lot of reading and had already come across Sarah and her book "No Fear, No Force" when looking for some guidance and ideas. The ponies were gentle but young, unhandled, and very nervous; everything was new for them. The whole experience was a steep learning curve for all of us. They had to learn to eat from a bucket, that hay came from a feeder, and that people were around several times a day and wanted to get close to them now that they were on their way to domestication. We had to source "Heu" (hay), a Tierartz (vet), Möhren (carrots) (20 kilos for €4 from the vegetable shop on the border) Lucerne, die Haltern (halters), ropes and later a Felderhelter (field shelter) without much German and no one horsey around to offer help or advice. Maybe that was a good thing though as we met Sarah!

Thinking had changed since I was last around horses and looking back I don't think I was taught very well at the time. It didn't take long to find out that we really needed some help and guidance on how to progress further. It had been a very long time since I had been involved with ponies and I needed some refresher lessons with sound techniques for semi feral ponies. Chris had never had anything to do with ponies but was keen to learn. So I emailed Sarah who immediately offered some good advice. We bought panels to make a pen, got the ponies used to going in it and carried on. Round here semi feral ponies are rarer than hens' teeth and so are the people who know anything about them. Besides which, we wanted to do this the "No fear, No Force" way.

So, last year we booked two days training and off we went via Easyjet to the New Forest and Sarah to learn more. (We can recommend B&B with Maureen & Barry Penfold at Primrose Cottage.) We spent two intensive days with Sarah learning about Dually halters, long lines, horse psychology and body language and clicking. Our heads spun. But home we came, upskilled and enthusiastic to carry on with the feather duster and some new clicking techniques. Over time - we are slow - we moved on, getting to touch them all over, asking them to pick their feet up and then we were into leading, walking and turning, backing up and moving over. We learned the power of the pause and endless patience. We roped in visiting children to wave umbrellas, kick footballs and to be noisy. We introduced them to the lawn mower, bicycles (the locals thought I was a complete weird cycling round the field ringing the bell closely followed by two curious ponies), poles, and even scary Mallorcan hats.

We found out if you are short of time don't bother with a training session, as you can be sure the ponies will detect the need to hurry and react!

This year we met Sarah again for a very wet day in April and met Henrietta, the charming but challenging mule. Otherwise it was a truly dreadful year for us with many things going wrong and finishing off by me falling on and breaking a finger. Sarah has all my sympathy. (And yes before you ask a pony was involved.) So it was only in the summer that we started long reining them. We saw It took a while to get both ponies comfortable with having the lines all around them and touching them. Slowly, slowly and with patience we progressed. They now turn and back nicely and we can work on getting them going forward more.

We now have two very calm and friendly ponies who are easy to catch and handle, who speak to us when we appear in the field, who rush up to greet us and follow us around happily. They have a pretty comfortable easy life in their field with trees, apples, a track and a shelter. It has taken lots of time and hasn't been easy, there have been setbacks and frustrations along the way but it continues to be hugely rewarding, especially when we look back and see how far we have all come. Chris has even discovered a new interest that doesn't involve petrol! Best of all Finn and Hazel didn't end up on someone's dinner plate as youngsters. There are too many people who eat horse meat around here and unfortunately we do find it on restaurant menus as a speciality. I won't even mention Brexit!

And what are we going to do with the ponies long term? Well the hope is some driving. The pipe dream is some work in a friend's vineyards but there is a huge amount of learning to be done on all our parts before we can even think about that. We have some carriage driving lessons fixed up for us here in spring (in English despite the fact we are learning German). It will take us quite a while before we can hitch up and drive off into the sunset but the possibility is now there and we are not in a rush. Slowly, slowly there is the possibility of many things. And there is always Sarah to refer to for her skilled help and excellent advice! 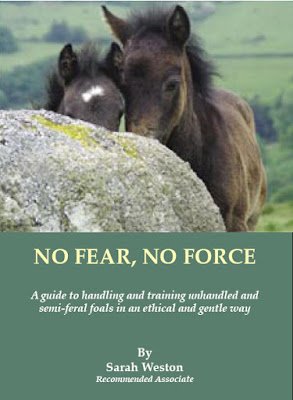 On the subject of Exmoors, I received the following email from Emily G today. She has an Exmoor foal that hasn't had much handling:


"I received your no fear, no force book for Christmas and what a help it's been already."