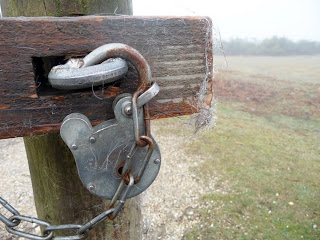 There are some things that I make a big deal so that for the horse they can be a small deal.

Take loading for example, to make loading and travelling as risk free and easy as you can, then you need to practise before the horse goes anywhere. The practise itself needs to be safe too so that the horse doesn't learn the opposite of what you want him to - so poll guard on and close fitting boots or bandages. He needs to be trained to accept a poll guard and boots before going near the trailer. By making a big deal but not a big fuss, you can keep your own adrenalin down and the horse's too; you know that you are working in a safe way and doing what you can to minimise risk. The horse needs to get used to partitions and bars and to be fine about being tied up. To do otherwise is to rely on luck and most of the time people are lucky. However, there are an amazing number of horses for sale/ loan that "won't load on to a trailer" or won't load at all because someone has taken a short cut and just hoped for the best.

I'm often asked to take short cuts or put in a position where I feel under pressure to do so; sometimes because the owner doesn't realise the risks involved in what they are asking. I feel as if I'm being awkward when I say no or suggest an intermediate step or ask for safety precautions to be put in place but it's me who would be in the firing line if something did go wrong.
Posted by Loisaba Wildlife Conservancy at 8:37 AM