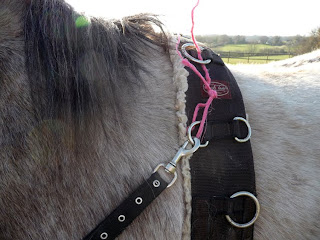 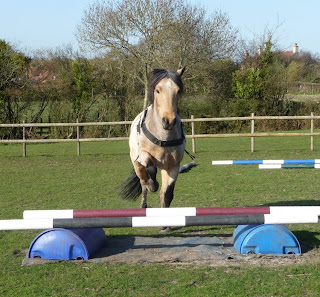 Yet another giant leap for Jack when he wore a surcingle for the very first time today. Given that he can still woosh when worried, I took every precaution with his preparation and clickered him through each step. First of all I passed the 12 foot line over his back and around his tummy and gave him a bit of a squeeze - no alarming reaction. Then I put the breast girth all around his neck and over his back before taking it off and attaching it to the surcingle. Once the surcingle was in place over his back, I passed the breast girth around his neck and clipped it onto the thin piece of twine I had attached to the ring of the surcingle; this meant that it would easily break if Jack took off at this stage. The instant I had one girth strap done up, I re-clipped the breast girth to the ring itself so that if he went off now, the surcingle wouldn't slip backwards and become a bucking strap. This means that I didn't have to do the girth up tightly from the outset and that it still wouldn't slip back if Jack got "thinner" as frightened horses sometimes can. I then did the girth straps up in gentle stages. Once I was sure he was fine with it on standing still, I began to walk forwards with him (note I had no headcollar on him). This was followed in short order by trotting and then jumping over the barrells. No drama at all!
Posted by Loisaba Wildlife Conservancy at 8:23 PM