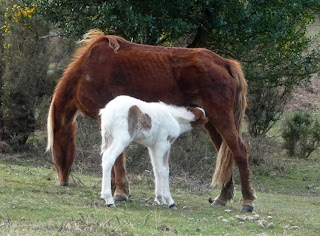 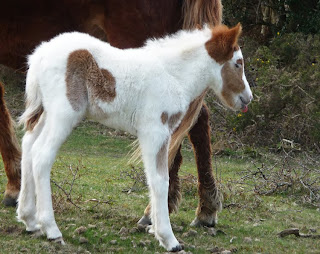 It's always delightful to see the first foal on the Forest and this must be one of the earliest ones. However, Mum is in extremely poor condition. The argument for not feeding the New Forest ponies has always been three-fold - firstly, that these ponies need to be able survive on the Forest all year round or we will lose the hardiness of the breed and secondly, that they are mammals and mammals are meant to be fat when times are good and thin when they are not. The third argument has always been that ponies that are fed will actually lose weight while they are standing around waiting for their food to turn up. As someone who feeds my semi-feral ponies throughout the winter, and a collection of other people's, I would dispute this given that my own ponies are clearly rounder than most of the non-fed ponies. Thinny, a friend of Nelly's is still thin despite being fed the same as my own ponies and she just doesn't seem to thrive - having said that she is certainly a lot smilier these days. I think it would be worth running a proper experiment to test this theory. It has been such a hard winter for the ponies generally and many of them look absolutely terrible.
Posted by Loisaba Wildlife Conservancy at 10:12 PM