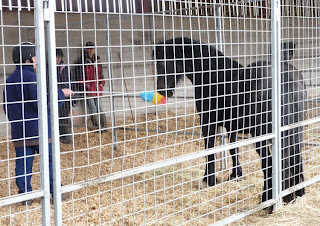 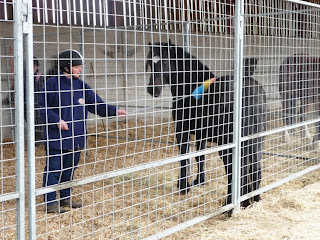 This is Whisper, a 12 year old Welsh Section D with quite a long story behind him. He apparently went through Reading Sales at one stage and was taken on by a lady who did eventually ride him. Following an accident, she turned him out in a 9 acre field with other horses and slowly but surely he regressed to a wild state. When he came to Esther some months ago, everyone had to hide behind a tree while he was tempted into a corral area with food and he was then travelled loose in a horse box to his present home. Esther hasn't been able to catch him since. He tends to hide behind Sam, her other horse, and to whizz around the barn. He would accept food from the hand but only from people standing outside the barn.

We started off today by cordoning off a smaller part of the barn with 6 panels making an 18 foot by 18 foot area within which to work with him. I used my normal advance and retreat with the feather duster to ask him to accept first touch and within a relatively short time I was able to touch him all along his left hand side. I then did the same with a shortened feather duster and finally my hand. I did a little work on his right hand side (where he was much more shy) before he had a break. During the next session, I did a brief re-cap and got to where I had left off in about 10 minutes. After that I introduced the headcollar and he immediately rushed off. However, in a short time he was prepared to reach out and touch the headcollar for which he got a clickered treat. I then used clicker training to ask him to accept the headcollar - at first using putting it on around his neck rather than over his nose. The next step was to ask him to accept it over his nose and then to reduce the number of treats per "headcollar on" but keep on with the clicks. This worked wonderfully well and he was soon following me around the pen asking me to put the headcollar back on. We ended this session with the owner putting the headcollar on three times using the same technique. After another break we consolidated that work and I just tested to see how he reacted to a lead rein (not too worried and he understood that a slight pressure meant come forward or go back) and I also picked up his front feet. This was pretty easy and he held them nicely pointing to some good training in his previous history. Terrific news for Esther as his feet are in urgent need of a trim. We ended the entire session by putting his headcollar on three times each in the full barn area.
Posted by Loisaba Wildlife Conservancy at 7:04 PM