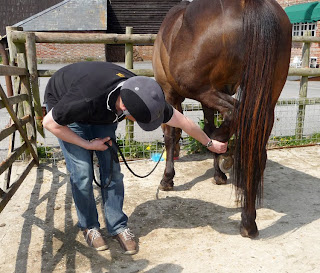 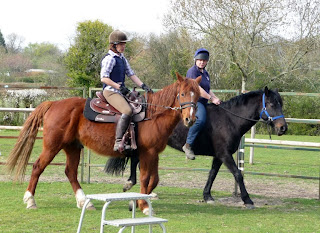 It was off to Britford to meet a beautiful bay horse that has come over from Ireland where he was hunted. It must have been interesting putting shoes on him as he has a well rehearsed technique of wafting his hind leg at people in a rather purposeful way - probably because of the way in which he was shod in the first place. Today we worked on asking him nicely but making it inconvenient for him to behave like this. I used a cue to ask him to lift his feet in the first place with lots of praise and lovely rubs if he got it right. Working at first with a curved walking stick around his fetlock, it meant that if he kicked the stick would remain in place until he stopped and then it would go away. It is so tempting to tie horses up to carry out procedures such as picking out feet but this just gives the horse full control over the 180 degrees behind him.