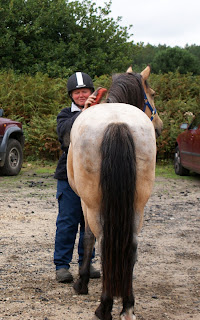 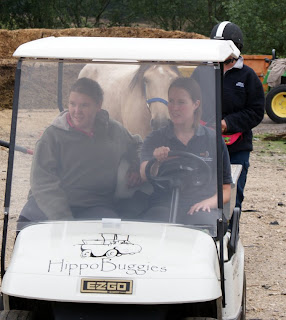 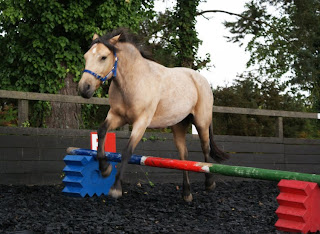 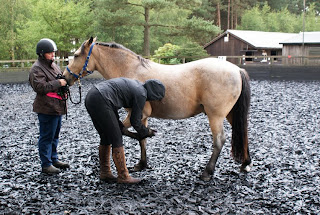 Jack and I eventually got to Ben Hart's clinic yesterday after a bit of a mishap with a poll guard. All week I had been practising with the narrow rectangular poll guard and Jack had accepted it very easily. Yesterday, I decided to couple this with a thin neoprene half round poll guard so that more of his forehead was protected. Jack took offence at this being put over his ears and promptly left. It took him a little while to forgive me and allow me to rescue him. Nevertheless I was able to load him and off we trundled. Thereafter we had a great day. Jack was happy to chill out in the car park while we waited for our turn and we amused ourselves with a bit of grooming and following the Hippobuggie around doing Pope impressions. Now that Jack is happily picking up his feet, Ben got us working on softness rather than duration and then allowing a second person to handle his feet with a view to trimming them. Fortunately Laura, the barefoot trimmer, had agreed to come and we worked with him together. We broke up each mini-session with some jumping so that Jack could enjoy himself and get rid of any pent up energy/ adrenalin.