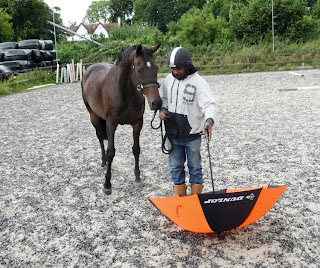 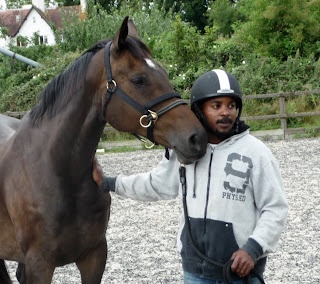 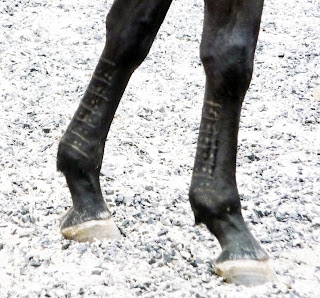 It was off to Dorset this morning to meet an ex-racehorse from France who has been very spooky. As you can see from the bottom picture showing where he has been pin-fired in the past, he has not always had it easy; it was good to see him settled in a nice home surrounded by people who really care about him. It was equally fascinating to meet his loaner, who is originally from Kenya but worked as an acrobat in an American circus! His sense of timing was excellent and he did a great job with this horse today working on softness, presence and confidence. I suppose that if you are brave enough to hang from a trapeze you may well instil the same courage in your horse but it's not something I am going to test for myself.
This is what the Horse and Hound had to say about pin-firing:
"Advocates argue that the operation, which is said to stimulate tendon repair by counter irritation and consequently help the healing process, can only be of benefit to both the patient and the owner. In most cases both legs will be treated simultaneously, even when only one shows a clinical problem. Those who are against the practice point to the barbarism of the actual act.
First the leg is clipped, the horse is sedated and a local anaesthetic applied. Then the patient is subjected to a red-hot firing iron placed against the lower leg. The iron will either be used to burn lines around the leg (known as line or bar firing) or punched into the leg to actually penetrate the tendon itself (pin firing)."
Posted by Loisaba Wildlife Conservancy at 6:51 PM