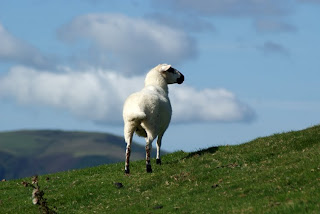 There were some very important points made at the clinic which I am sure will stay with me. For the first time, I really understood the usefulness of a circle to give a horse direction and to lighten up his front quarters. I think all those video of horses doing endless and mindless circles in Parelli training had given me a phobia but it was good to see circles being used to communicate with a horse and the horse being released to a halt pretty quickly. Circles can create all sorts of problems when they are used badly, often to get rid of excess energy and I think there is a world of difference between deliberately circling a horse and allowing it to come past you - here the horse is often pulled round to the left resulting in the left shoulder impeding and moving the handler; hard to stop once it has been established.

I liked the way that Lesley released a horse's hips and shoulder and drew the horse's head and attention to different sides - very clever stuff this and you would need to see it to understand it. I tried it out on Theoden this morning and it worked very well. He was also suprised to be asked to pick up both of his feet from the same side (but not at the same time).

Much was made of not pet-ifying or dog-ifying horses and I agree that it is important to get young horses accepting direction and not wandering all over you asking for attention right from the outset. It should all be on your terms. It must be a dreadful shock to some placid and well loved ponies to be told that they "must" once they start their ridden work. Of course, many of them then object.

I'm not convinced that just because a human spends time at the horse's front end this automatically leads to a bargy horse as I think it is possible to insist that they don't do that. I agree that we shouldn't be smothering them though and impeding their ability to see properly! For a pony like Mystery, Lesley's suggestion that we spend more time standing next to where we will be sitting is going to be very useful. We might need to stand a person on each side though to get her over her fear of seeing something out of both eyes at the same time. If we shape this, it should be possible.

Lesley also demonstrated how those heavy snaps that are on their ropes continue to swing under a horse's chin ages after any slight movement from the handler confusing, annoying and ultimately desensitising the horse. Indeed part of Parelli training involves utilising the snap smack the horse in the chin and face in order to encourage them to back up or yield. I'll find the Youtube clip of this and put it on here. This all made me feel better about the fact that although I use a clip I always tend to put it on the side of the headcollar that I am working so that it is much stiller. I have always felt that the horse gets a much more direct signal this way whether I am using an ordinary headcollar or a Dually.