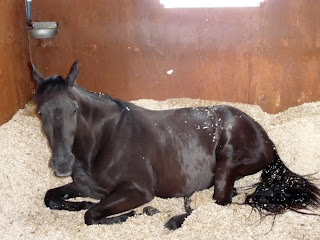 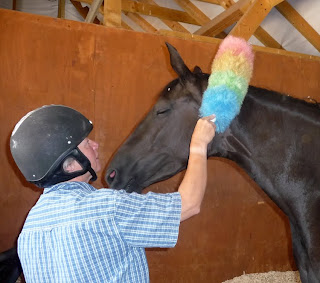 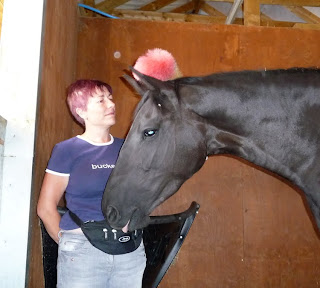 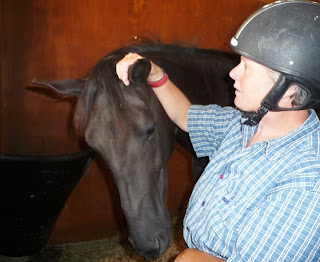 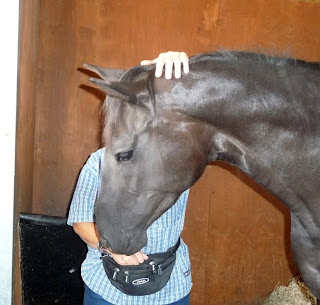 Jane's other horse Havanna has been sharp around her head ever since Jane got her. It makes it very tricky to get her bridle on and each time it's a fiddle it just reinforces the problem. Today we made a start on desensitising her head. Simply using the touch and move away technique wasn't going to be enough as Havanna quickly started to just flick an ear back to touch me and then took her head away (and she is very tall!). We decided that we would use clicker training to see if we could reward a simple pause. Havanna got the hang of this very quickly and we went from being able to touch her with the feather duster to a hand on either side of her head and all around her ears. Not only was she much stiller but sher head was a lot lower. From a click and treat for each pause we moved on to two or three clicks (intermediate bridges) for each reward. Jane is going to consolidate this work over the next few days and then we'll start using a leather strap in the same way as the feather duster and hand before moving on to the bridle itself.

She will also be checked physically just as soon as she is still enough to accept someone's enquiring hands.

This afternoon it was off to a horse whose initial "I can't" has turned into an "I won't" when it comes to loading. She seems perfectly settled when she is in the box, accepts the partition and travels extremely well. She has begun to plant herself at the bottom of the ramp and simply refuses to move. I am convinced that she learned that behaviour worked in earlier "I can't" days (years ago). Today she loaded beautifully about ten times from the outset so I may have to revisit when she goes on strike again; the first time I have met an owner who was frustrated because her horse did load! However, we did some work with the tarpaulin instead. At first she was willing to try and to take a step further forward each time but then I watched her switch from I can't to I won't. In these circumstances we used a carrier bag on a stick to flap at a good distance behind her to just encourage her to take one step forward and "unstick" her. This was sufficient to ask her to engage again and meant that I could thank her for taking that step forward by gently backing her three steps and then ask her to come forward again. Within a few minutes she had walked all the way over the tarpaulin. It's really important to know the difference between I can't and I won't and, if in doubt, give the benefit of that doubt to the horse.

"She loaded perfectly to go but I did pretend it was just a practice, put all her tack and grooming kit in lorry before I bought her in, then when I was ready to go just walked her up the ramp like a dream. Coming back she did think about being sticky and I thought 'oh no here we go', but I told her it was about to start chucking it down with rain and if she hung about we were both going to get very wet so she said 'ok mum' and walked straight on, so that was a relief!" Pretend you are practising seems to be quite a good motto as you're adrenalin is bound to be lower. M is now going to keep a diary of where she was going, what time of day, what she was doing at the other end and anything else that seems to be relevant in order to see if there is a pattern to her horse's behaviour.
Posted by Loisaba Wildlife Conservancy at 7:53 PM