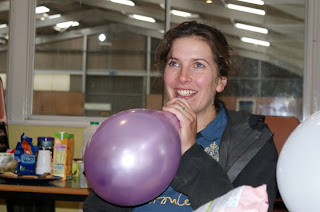 Amongst the theory work we did at Ben's clinic we worked with elastic bands and balloons to explore the idea of feel and the need to make sure that you don't break your horse or make him go bang! Having managed to burst Jack's balloon first thing in the morning this had a particular resonance with me. So important to recognise that even the smallest changes in work we are doing, the equipment we are using or the environment and surroundings may amount to too much pressure. Outside factors may mean that the balloon is already at full stretch or half way there.

Received this e-mail on 18th August from Carol: "Well, having just read your BLOG and finally finding time I thought I would drop you a line about events at the weekend. John has just come out of hospital after a nasty fall from Gala! Basically he was showing me what he could now do with her and I was very impressed. He pulled up by me and said he would take his gilet off and I said, wait, as a lot of horses can get spooked by you taking off clothing so just move the zip a little and let me see. So he did a bit and I saw the shift in her eye so I said to him, she is not happy, DO NOT TAKE YOUR GILET OFF -but he ignored me and carried on saying she would be alright. And lo, she took off I couldn't hold her and she just started bucking across the field and John came off. When I got to him his eyes were rolled up in his head and he was groaning. I thought he was dying! Well ambulance dash to Exeter, much worry as they thought he had fractured his lumber vertebra but scans have revealed he is fine, just bruised. I have personally aged 100 years!

With both my accident with Bobby and now John's with Gala the horse each time gave a clear "please do not continue" and we both did. So sometimes it is the merest whisper of breath that makes the balloon go pop!".......... John is apparently back at his desk but very sore.
Posted by Loisaba Wildlife Conservancy at 8:17 PM