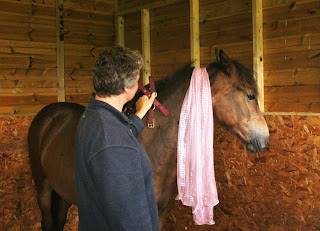 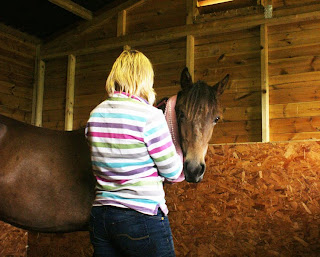 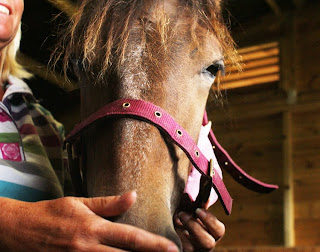 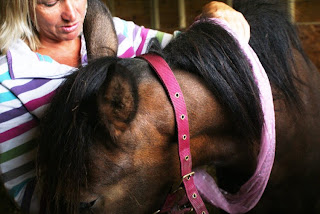 Today it was off to see Anne and Bluebell again. The first priority was to take Bluebell's headcollar off as it was beginning to rub and then to persuade her that she it was okay to have it back on again given that it had been forced on the very first time. Luckily all the work we had done so far and the work we did today convinced her that the headcollar was nothing and by the end of our session today, Anne was able to put it on and take it off really easily. Bear in mind that this is a yearling filly who was born wild and brought in by the agister having disappeared with her mother for quite some time. After just four hours work in two sessions, she can be touched pretty much everywhere, accepts her headcollar and can be lead with just a scarf around her neck.
In the meantime, Brandee is doing really well too and on Monday I taught Michelle how to put her headcollar on. Michelle took the time to say sorry to Brandee for all those times that she had has to grab her through the fence. She was rewarded when Brandee followed her all across the pen, something she has never done before. It was an emotional moment.
Posted by Loisaba Wildlife Conservancy at 8:03 PM