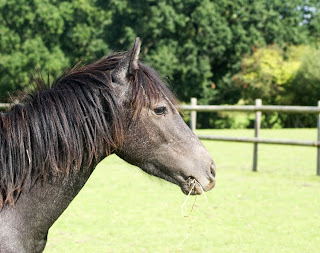 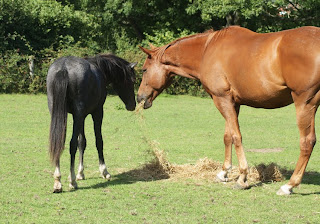 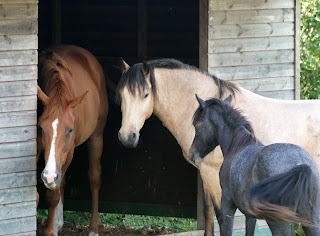 Yesterday morning, when I really should have been somewhere else, I espied Mussels and his dam, Limpet, at the side of the road. Mussels, you may recall, is a yearling colt that I did some halter work with some months ago.At the drift on Wednesday his owner told me that she had decided to turn him out again rather than send him to the sales but had now found him a nice new home. Unfortunately though the drift hadn't found him! He was very pleased to see me and followed me back to the fields for a bucket of mix. He didn't seem to be in the least bit concerned about leaving his Mum and soon made friends with Jack. Limpet will be able to come back and talk to him over the fence for the next week or so until he goes to his new owners so not the abrupt (and early) weaning that many ponies get. We'll do some leading and loading work before he goes too.
Jack and Mussels are in fact related as all of their breeder's ponies come from the same foundation mare some 50 years ago!
Updated 31st August - until now, Mussels has been in a field next to Jack but this morning we felt he was ready to move in with the others even though Chancer towers over him. The Forest life prepares these young horses well for socialising so well. Mussels champed his little lips and looked all respectful and within a matter of minutes he was under the wing of the other two and sharing Chancer's haylage pile.
Posted by Loisaba Wildlife Conservancy at 7:14 AM