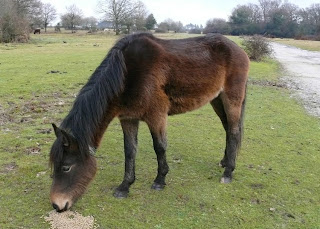 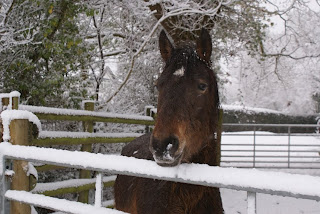 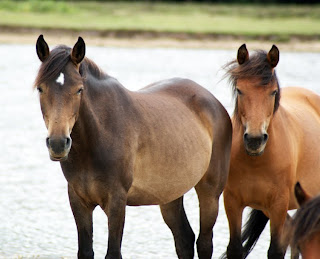 Something rather marvellous has happened. A couple of winters ago a slim waif that we called "Thinny" turned up on our doorstep with Nell one feed time. At that stage she was very poor. Ever since I have treated her as one of my own, feeding her througout the winter and occasionally worming her. She has occupied a privileged position as Nelly's best mate as Nelly, who is normally quite strong minded about food, has always shared the same pile of hay with her and even her bucket of feed. I haven't been able to find a brand on her in the winter and was loathe to report her to the agister just in case she belonged to one of the less sympathetic commoners who might decide that she was not economically viable and send her through Beaulieu Road sales. However, having brought her in with Nelly for the Equine Touch course (I am too soft to just leave her outside), I noticed that her brand was now visible and contacted Andrew about her.
It appears that she was turned out at the Canadian War Memorial 18 months ago and her owners who live on the other side of the Forest have been searching for her ever since. The Canadian War Memorial is three miles away and at some stage Thinny (whose real name is Double Brandy by Willoway Double Gold) must have gone through the underpass at the A31 and wandered off towards Fritham. Her owners, who would always bring their youngsters in for the winter, eventually thought she must be dead. They were delighted to be contacted about her and thanked me for looking after (this is not always welcomed) and are coming to see her.

Posted by Loisaba Wildlife Conservancy at 7:27 AM