I have to confess that I have been applying the brakes in Sampson's training, trying to persuade his owner to wait, wait, wait and to give him as much time out with other young horses as possible. Even so, it has been hard to keep him occupied and educated when he picks things up so quickly and is frightened of nothing. When he's bored he provokes people (and other horses) into engaging with him by biting and other strategies. We've tried ignoring him, we've tried answering him with some fairly robust body language and distracting noises. 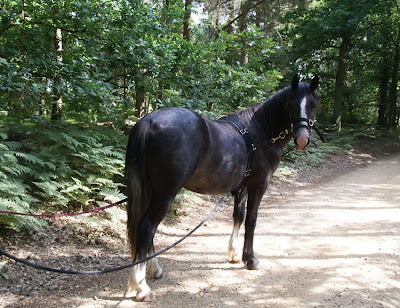 I was loathe to start long reining him this early given that there is so much criticism of travellers who drive their horses very young and the training of yearling racehorses. Today however we decided to give it a go and he absolutely loved it. He didn't put a foot out of place and seem to be just as relieved to have us out of his space as we were to have him out of ours. We did start off with dual controls but with Theresa very much at arm's length and little by little she dropped back to his surcingle and then his tail while he strode out along the tracks with extraordinary confidence for such a young horse. His absolute bombproof-ness will be such an asset in the fullness of time. For once also I am going to support an owner's decision to start their horse the instant he is three - as long as she doesn't overdo it. Theresa is tiny and agile. 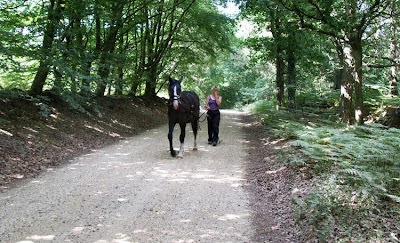