Once again Samson enjoyed his long reining work today despite the heat. While he is logging very low mileages once a week, Theoden is now being ridden four or five times a week and seems to be thriving on it. Nevertheless we went out for a ride with my field landlord yesterday and I had forgotten how proper New Forest Commoners don't stick to the tracks but just go in a straight line wherever they want to go. Theoden looked mildly surprised and had to really concentrate on where he put his feet! It was interesting to hear a bit more about the history of the Forest and how it was used for bombing practice during the war. We rode over one of the targets and A described some film footage he had seen of a DeHaviland Mosquito flying over the same target. 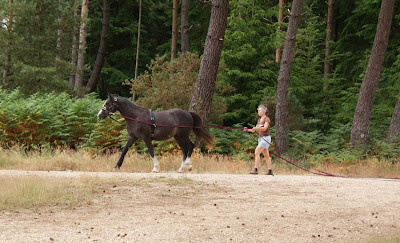