The quickest way of mounting a horse or negotiating a gate when on board  is to do it slowly. By training your horse as if you were doing it in slow motion, you can break each process down into its component parts without angst and teach your horse not to worry about it. It's rushing to do these things that teaches horses to rush too. That impatience, frustration, and anxiety makes it more likely that they will bump into the mounting block, or the bit, or the fastening on the gate, and reinforce their anxiety. In both situations the rider's body can move into positions that gives the horse a confusing message about where he needs to be. Slow down, explain things quietly with a quiet aid and he'll get it. 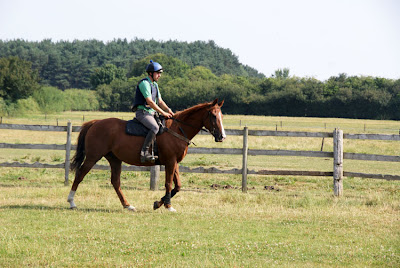 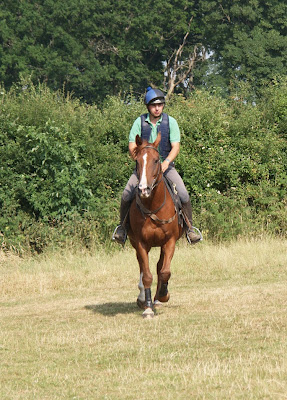 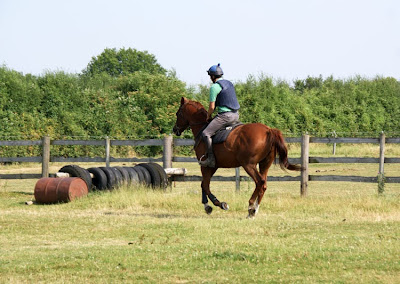 Chancer is also making haste slowly up at Ian Vandenberghe's yard in Oxfordshire where he is being ridden by Ian's extremely capable rider, Jake. At nine, Chancer was too young to be claiming his pension and I felt that some physical work would do him good. Furthermore having a stable in the winter was likely to benefit him too because despite my best efforts he does lose weight in early Spring. I decided to look for a loan home for him and wanted to give him the best chance of success with a few weeks of more intensive training. Intensive only in the sense that it will be on consecutive days. He seems to be doing really well so far with walk, trot and canter re-established and riding out on the roads (and even cantering on the verges). I have a very promising potential loaner looking at him and she rode him this morning too. We will always provide a safety net for Chancer no matter what the circumstances as I feel morally and emotionally responsible for him for his lifetime.

On the way back from Ian's I went to work with Denys who I haven't seen for about four months. His owner got an extraordinary amount from our very first one hour session all that time ago and it was great to see how well they were getting on. Denys' previous life has included some eventing and show jumping and he has clearly had a hard time at one stage judging by the pin-firing scars on his leg and his reaction to anything that moves like a whip. At seventeen it is not too late to show him that he needn't be afraid of new things and to prove to him that no-one is going to hurt him. Here I am working with the umbrella. He was particularly frightened of the clicking noise it made as it was put up and so there needs to be a lot of repetition until he realises that it is nothing significant.

"Thanks so much for today! I feel I've had a boost in confidence and in inspiration for things to try with Denys, and I really needed that. It's so nice to know that I'm doing the right things and it's not my doing something wrong that is causing him to react differently! It seems to make sense now that he was reacting to the sounds he could hear up the hill from his field! I'm so pleased to have come from wanting to sell him after a month of owning him, to having had him for nine months today and seeing him come to me for reassurance before he walks up to an open umbrella. We've both improved a lot with your help! I concentrated so hard today that I ended up sleeping for two hours solidly when I got home - I wonder if Denys had a nap too?!" RD