To travel for a total of two hours for a job that takes less than half an hour is a great success. It seems we had gauged when Maverick would have had sufficient practice to load easily and stand calmly in the horse-box just right and today he went in and out three times before having the doors closed behind him three times and then ramp slowly closed. He danced on the spot three times and then stopped. This meant that he could go on his way down to Tim Piper's where he will have his ridden education. There he will meet up with Coco who is at 'finishing' school too. 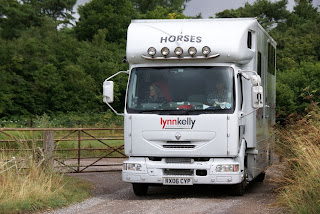 Back at my fields, the horses were playing sardines in the field shelter and should have no problem with confined spaces in the future. 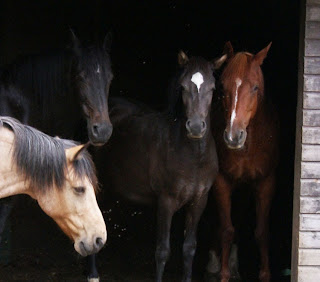 "All went well. Maverick was fantastic. He travelled loose & liked to turn round when we stopped to look out the window. Lynn said he spent most of the time travelling backwards. I unloaded him which I'm really chuffed with cos he listened to me while I steadied him & he came out forwards. I led him to his stable, his eyes were on stalks but he was still calm & I left him eating his hay. Don't think you'll be redundant though cos it would be nice to do some ridden stuff with you as well. Will keep you informed of his progress :-)" N.O'M.