With discussion groups fizzing with conversations about the best insect repellent, you can only have sympathy for horses at this time of year having to endure Horse Flies, Bot Flies and in the New Forest Crab Flies. As far as I know, Crab Flies don't tend to bite horses unless they are annoyed but just tickle like mad. They cluster around the teats, sheaths and right under the tail of the horses. The only way to kill them is to tear them apart and even then the front end keep wriggling for quite a long time. I learned in Guyana, where the insects are intent on killing you, that there is no point in looking down to see what is irritating you as by that time you'll have been bitten. Instead, the Amerindians slap their skin with gusto, hard! In fact, one slapped me... maybe I deserved it. I have taken to hitting my horses, sometimes with the wip-wop, to help them in their quest to get rid of the mithering creatures, and they seem to appreciate it and know that my intent is good.

I've been surprised and heartened at how tolerant Theoden is of insects when hacking out. I cover him in Lincoln's Fly Repellent and Fly Stuff around various susceptible regions of his body, help him get rid of any I can reach but otherwise he contains himself well and just becomes a little introspective, flopping his ears down like a dressage horse. Considering that this is a horse that you used to blame me if he even so much as tripped, this is progress! 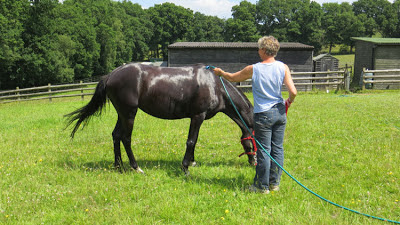 I'm not surprised that some horses are anxious about being sprayed or wiped with insect repellant or washed down with the hose. At times like this, horses are even more sensory defensive than usual and suspect that everything that touches them is a creepy crawly. They react first and think later and sometimes it takes a little while to persuade them that something is friend not foe.
Posted by Loisaba Wildlife Conservancy at 3:06 PM