A common story that I hear and see is where a horse has become dangerous to travel because he almost falls down in the box, leaning hard against the partition, and often scrabbles against the outside wall of the trailer. The first many owners know of it is when they hear an almighty clattering in the trailer as they are going along. One of my clients has very kindly sent me a video of this happening, even at standstill, with her pony. Although the pony isn't galloping against the outside wall, you can see just how hard she is leaning on the partition and just how this might develop into a much more serious situation on the move.

No-one knows exactly why a horse or pony starts to do this but the instinct seems to be to go into pressure against the partition at the same time as becoming very dazed looking; some almost look as if they have fallen asleep. The cause could be physical - poor balance through a neurological or ear problem, a problem with any of the joints; psychological - through abject fear of travelling; behavioural - the horse has learned that panicking like this gets the vehicle to stop although this is most unlikely. Most people report that the first time it happened was on a right hand bend or going around a roundabout but then recurs on all bends and even, as shown in this video, when the box is entirely stationary.

Here is a picture I was sent by Your Horse Magazine along with a question to be answered on one of their Ask the Experts pages. 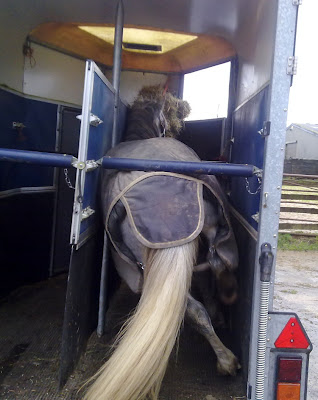 As yet I do not have a foolproof 'cure' for the problem and only wish that every horse that had the problem could have a full medical examination to look for the most obvious causes. Teaching the horse to move away form the pressure - perhaps using a jumping pole at his side when practising outside the trailer has a limited effect. Experiments with the size, shape and space available within the trailer have had differing results. The most common suggestion, and the one that seems to have the best effect, is to travel the horse alone without a partition and with full width breast and breeching bars cross tied. In an ordinary horse trailer it is NOT safe to travel the horse without those bars since the bars help to maintain the integrity of the structure of the trailer and help to prevent it distorting under stress of any kind. Indeed, the front section of a trailer, in front of the breast bar, is simply not strong enough for a horse to stand there and certainly not in the case of an accident. Even using full width bars and no partition has safety implications since the horse would be far more mobile in the case of an accident and, having a relatively high centre of gravity, would cause the trailer to be far more unpredictable when braking in the first place. Needless to say drivers would have to take this into consideration in their driving style and speed. The fact that full width bars are available would suggest that the manufacturers believe that horses can be travelled in this way but it would be wise to check. In any event it would be open to the police to prosecute for an unsafe load or for a court to find there was contributory negligence in the case of an accident; the Fire service aren't impressed with the idea of travelling without a partition at all. As with every time a horse is taken out on the road, we owe a duty of care to other road users.

I would always be very wary of travelling a horse that is known to have a travelling problem with another one as the net result may well be two with travelling problems. Some horses that do this in a trailer are perfectly fine in a horse-box although travelling them backwards or herringbone doesn't seem to be a solution of itself.

Under no circumstances should anyone travel in the trailer with the horse - not only would it negate any insurance and leave the driver open to prosecution, it is highly dangerous. Everyone heard about the case of the poor chap who was killed trying to calm down a horse in a box just last year. I have to confess I have done it in the past on private land but there are pictures held by the Animal Rescue Team that would put anyone off doing it forever.

You'd think that a horse that behaves like this might have had a terribly nasty accident in the trailer in the past but the converse picture is that horses that have recently been involved in an accident seem to readily load into another trailer at the very scene. It does make you wonder what connections they make between one event and another.