Last night it was off to the Monty Roberts demonstration at Crofton Manor. Monty is as popular as ever and the event was sold out. Many people had never seen him before and it's good to know that he is reaching a new audience all the time. I always think that Monty is the Full Monty in that everything he does is done full on. Last night was no exception with five horses making significant progress in their training. The starter, an amazing coloured horse called Jazz, had obviously been well handled by her owner and she worked like a dream accepting long lines, her first saddle and then her first rider without a murmur. She was no slouch either - half Thoroughbred, half Warmblood, she had the capacity to be extremely athletic and if she had said no, it would have been dramatic.

The second horse, a Connemara called Connor, is apparently frightened of his own shadow especially when out hacking. He ended his session being ridden around by Jake with flags aloft, plastic bags all around him and going over a large tarpaulin. Monty emphasised that there was still a lot of work to do and a long way to go but all do-able.

The third horse was an ex-showjumper called Sidney that didn't want to stand still for mounting. As well as solving that problem, this 17 hand agile horse, that had been kept as a stallion for most of his life, was a willing partner for War Veteran Paul who did a very touching Join-Up with him. It was as if Sidney could see into Paul's soul as the two met in the middle and then Sidney tried to follow him out of the pen.

The final two horses were both non-loaders. My starring role was to take Sev into the arena. A task for which I was almost late! 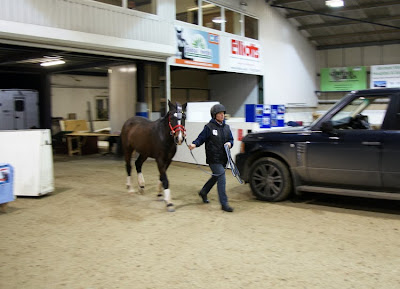 Sev and the other horse, also called Monty, were soon loading although Monty, the horse, was not even keen to go into his stable beforehand. It's easy to describe these horses as stubborn but there has always been a reason for the behaviour to start and labels like this can just set up a battle. 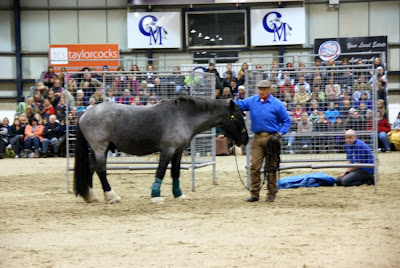 As always it was great to see my friends, colleagues and clients past and present. I was inundated with questions at the break so didn't have chance to say a proper hello to lots of them. So, if you were there and we didn't get the chance to speak, hello!
Posted by Loisaba Wildlife Conservancy at 8:16 AM