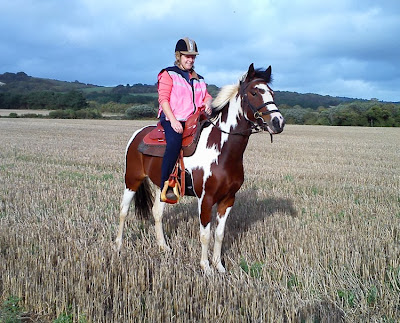 Dillon continues to make massive progress now that he is comfortable in a saddle he can trust and has an owner he can trust too. Back in the summer he showed us very clearly, but very calmly, that he would not tolerate an English saddle any more. It was difficult to know whether it was current or remembered pain but he went entirely differently as soon as the weight was distributed widely across his back. He has had a lot of rehabilitative work on his back to address any physical problems.

"Different Route = Different Horse  Ta Da! A brought the bike out today and we went off down the cycle track over the wooden bridge and towards Merstone. He was such a good boy no major sticking points and even dealt with roadworks on one of the bridges which narrowed the passageway to about 4ft.  A clipped on for the way over as there was a very steep bank down to one side but on the way back we managed on our own - he even stopped in the middle of the bridge to inspect it all. Was not even fussed when we turned around and went back home the same way. I feel fit to burst tonight." DW 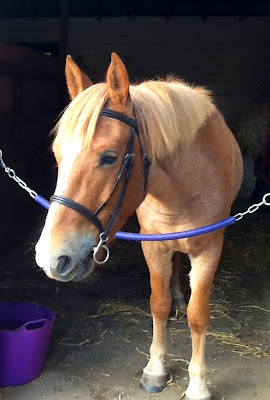 Hilary is gently persevering with Benji's bridle. Because of plaques in his ears he has a lot of remembered pain and is understandably reluctant to have anyone touch them. On the days when riding is her priority, Hilary assembles the bridle around his face so that she doesn't undermine the separate work she does on desensitising his ears.

"Admittedly, it wasn't put on it the traditional way but assembled round like I do with the show bridle but it was achieved without stress and with a reason. Since your visit I've continued working with his ears and making slow but steady progress. I realised, however, that for some reason it was getting in the way of me riding him so I worked out how to put the bridle on without going over his ears. Now I can get on with riding him and continue to work with ears so that eventually the bridle can go on over them." HP 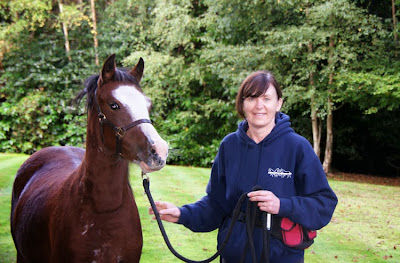 Like all young ponies Rose goes through 'phases' and became nervous about leaving the field, and more particularly her field mates following S going away for a holiday. The first time she took her out there was a lot of leg wafting, rearing, neighing and planting and it all looked a bit ragged. S and I left small pots of food in strategic places on the very short route around the farm so that she could be rewarded as she went. However, we then decided to introduce clicker all the way round. Rose was very quick to understand how it worked (that's Welsh ponies for you) and the pattern was interrupted. Here she is just alert because she has spotted the gardener down the track.
Posted by Loisaba Wildlife Conservancy at 8:21 AM