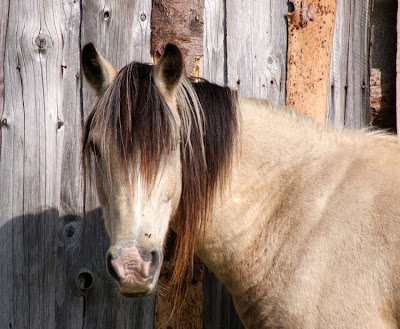 This is Tao, one of the ponies that lives on the Forest. He's getting on in years now and has been a constant of my life here in Woodgreen. His owner feeds him all through the winter and, like mine, he is on assisted living.

Tao is a Hindi word meaning path or route and that's what I have been seeking both literally and metaphorically for Theoden. Over the last few weeks I have been working with a few well respected practitioners in case conference mode to check that I am taking the most obvious, easy and pleasant route for both of us. For example, the three day clinic with Amanda Barton has had an astonishing effect on Theoden who seems to have realised that he can use his hindquarters to drive himself forwards and is far more balanced and less inclined to trip than he has ever been. Yesterday I really enjoyed the company of Nikki Chamberlain who is an Animal Behaviourist and clicker training specialist. Clicker has also had a remarkable effect on Theoden recently since I have included far more of it in his work.

Although I have been using clicker on board, I haven't been using much of it on the ground. I am particularly disturbed by some of the behaviour that the loose and undisciplined use of clicker can produce on the ground and I have no great urge to teach my horse tricks that have no practical value for the work I want to do with him. I still find tricks demeaning. It has always struck me that the two training 'systems' that lie either side of Intelligent Horsemanship can produce real anger and frustration in horses, especially when they are not done well. Some of the angriest, most frustrated, horses I have ever seen are those trained using the Parelli system where the concentration is on 'no' and the noes don't make sense to the horse. I am always reminded of the Joan Armatrading song "Oh when I get it right, will you tell me please."  I once had a T-shirt with that written on it!

On the other hand some of the angriest horses I have ever seen have been those who are clicker trained where they have worked out what they need to do to earn the 'yes' but can't work out why it is being withheld. With no boundaries in place, I have seen them curl around their handler not allowing them to leave or threatening their handler who is trying to ignore their behaviour and wait until the horse switches off before they can end the session. I have always found clicker much easier to do if the horse knows there are some boundaries.

You can then get into all sorts of issues, particularly with clicker training purists who advocate free shaping everything, and are wary about the use of negative reinforcement, i.e. pressure and release, escalation of pressure, and the use of any kind of training halter or gadget. It's a minefield I have steered my way through for a number of years. At the same time I am aware that Monty (Roberts) in particular really doesn't like clicker training at all. He sees it as one of the worst forms of horsemanship known , saying that horses should never associate food with the human body. I can see his point - one of the most dangerous ponies I ever met was a small Exmoor pony that had been liberally hand fed at a tourist park and when it was given to a lady for her small children it tried to mash them into the ground. However. there had been no discipline in the feeding - it had been mindless.

My fascination for a number of years now has been to see whether there is a place for IH-lite, i.e. the gentlest pressure and release coupled with clicker, however I accept that for my four basic rules - don't overtake me, don't invade my space, don't bite and don't kick - I will use escalating pressure and release. For me these are safety issues.

Theoden arrived with me hungry having had a lean winter. The people who lived around his field tell me that he as he got hungrier, particularly in the snow, he had taken to mugging for food. They took pity on them but he just got angrier with them. All horses think food is important - after all they are meant to eat for 18 hours a day - but Theoden had developed a really angry attitude around food. For a while this made it difficult to even get a bucket to him but over the years he has grown calmer, more tolerant and just much more easy going. He has never been kept short of food.

Getting back to the plot, Nikki and I worked on the ground with him to see if we could ask him to work with food unemotionally. We worked with a fence as a boundary at first and asked him to just be still in his mind and his body, looking for a softness, before asking him to touch the end of the feather duster (target) to the verbal cue "touch" and then click and treat. This chaining effect slows the whole process down. Later we worked with him loose in the field and it is fair to say that although he started well, he did get over-excited and angry when he thought we should 'cut out the middle man' . I've got some work to do if I am to get him through his anger and out of the other side. The good news is that he really tried to take his angry behaviour away from us - bustling around but not kicking or biting. Honestly this is an improvement on a horse that once came a me with his mouth wide open and once attempted to squash me when I tried to put fly spray on him.

I am pretty confident in my own abilities these days and Theoden just gets better and better, nevertheless checking in with different people with a different world view is always a good idea. Otherwise the hats on your hat stand become dowdy and old fashioned.


Posted by Loisaba Wildlife Conservancy at 8:22 AM