There are a lot of horses out there that are worked on a circle a lot of the time. Single line lunging is used extensively in traditional and natural horsemanship and horses are often schooled in circles when ridden. We need to think about how this came about and whether it is actually for the good of the horse.

Monty Roberts has very strong view on single line lunging particularly where a cavesson is used - he says in his book, From My Hands to Yours: "The horse cannot possibly balance himself with the unilateral (one-sided) action of the weight of the line, let alone with the weight of the person pulling on it. If a horse is subjected to this treatment for an extended period he will modify his gait to compensate for the unilateral pressure. Head carriage will most certainly be negatively affected...[the horse] will usually negotiate the circle with his head held outward to his body axis...the horse that is travelling with a counter curve to his spinal column is working 'muscles against skeleton' in an unnatural way." In other words the horse will be crooked and tense.

Many practitioners believe that there is a great physical value in lunging a horse when it is done well and it is often prescribed as part of the rehabilitation of a horse that has been physically weakened in some way. However, look around most yards and the lunging you see isn't done well at all. Ultimately, working in a circle must get very boring. The best lunging is a constant communication between the handler and the horse, the worst is mindless circling.

Circles are great for:

1. Saving the legs of the human
2. Saving the voice of the instructing human
3. Taking the edge off a horse and some would argue exercising him
4. Checking whether a horse is lame and on which leg
5. Training a horse to conform to a given, regular, rhythmical pace
6. Training a rider

I meet a lot of horses that are absolutely sick of circles. Theoden was one of them and with him I came to an arrangement in the early days that if he described one quarter of a circle without bracing or resisting that was it, tack off and turned out. In time he would happily offer a few circles without argument but my promise to him was that he would never be asked to just go round and round relentlessly ever again.

Here Coco tells us what he thinks about circles! In fact we were preparing him for long reining where he would be asked to describe all sorts of interesting shapes but we needed to know how he felt about being driven. He just assumed that he was being asked to do a circle and off he went, protesting all the way.  His frustration also stems from the fact that he has been taught to 'face up' as part of his original training and the conflicting directions of facing up and going away can create a real conflict and confusion in a horse. 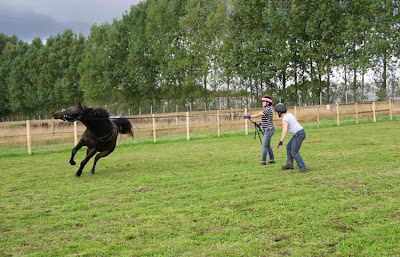 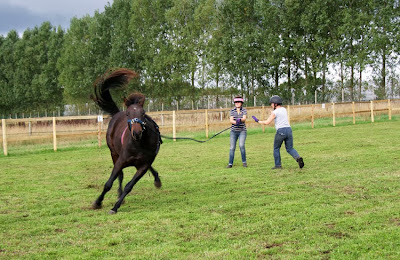 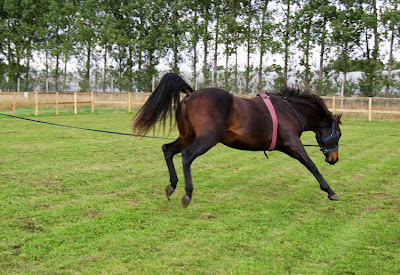 It was really important not to punish him in any way for expressing himself. We had asked for this information and it was a useful part of assessing him. 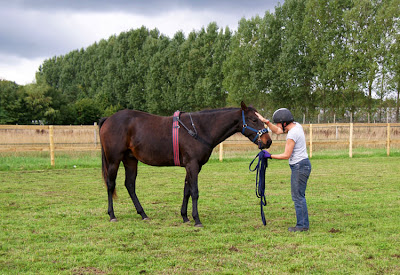 It is so important to avoid boring horses to death when working them. Bella is now an old hand a long reining and we need to be ahead of her planning interesting things for her to do on the long reins. Flat empty paddocks lend themselves to horses finding other ways to entertain themselves particularly where the trees hide spooky poly-tunnels and armies of fruit pickers! Once she came off the lead rein we waited until we had the perfect bit of long reining away from the gate and then stopped immediately. Just 20 minutes of work. 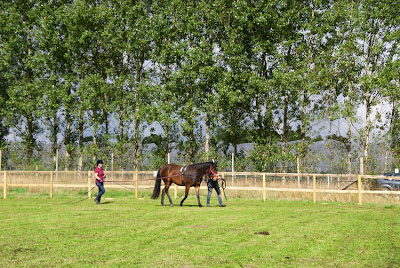 In the afternoon Tracey and I went off to Andover, where we got lost, and then further North to meet up with this gorgeous Shire horse. He needed work on standing still. Once again some natural horsemanship schools advocate circles in the form of "putting the horse to work" as a way of teaching a horse the value of standing still. I prefer to just ask them to stand still. It takes seconds especially if standing still and calmness are rewarded with a lovely rub. It needs to be practised with the adrenalin levels down. somewhere familiar and pleasant. We worked in the school and in the yard. 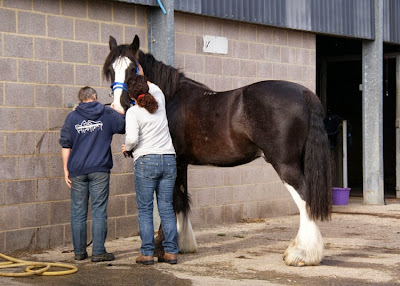 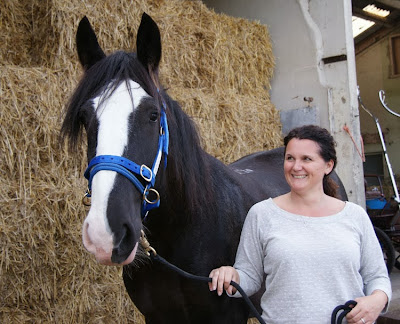 "I'm really enjoying your blog at the moment- lots to think about!" HP

Posted by Loisaba Wildlife Conservancy at 10:47 AM