"Thank you sooooo much for today, brilliant progress and will continue with what we both learnt today xx." LO

Five hours, five counties, four motorways and 200 miles yesterday to meet up with a little Welsh Cob foal called Fleur. Eight months old, Fleur came direct from a good breeder in Wales and has very posh bloodlines. She arrived with a headcollar on but very little handling. Her owner, having read No Fear, No Force, was keen to get it right and asked me to go out for a one to one visit. Of course it rarely is one to one these days as Chief Assistant Tracey likes to come with me and is handy for cleaning recalcitrant headcollars, bunged up with mud, taking photos, finding fuel for the car when we've almost run out, and tracking down the nearest M and S for sandwiches.

The natural instinct when starting work with a semi-feral type foal is to get a headcollar on as soon as possible and to take control. Accordingly it is often a fairly robust, matter of fact process which fails to take into account its psychological effect on the pony. Halter breaking is a long way off halter training since it defies logic to imagine that forcing a headcollar onto a pony's head is going to teach it anything about calmly accepting it in the future. The pony's head is probably the most important and sensitive part of its body, the bit it would seek to protect the most, even defend the most. To force a headcollar onto a pony by wrestling with it or restraining it risks undermining the pony's trust from the outset. That's why I concentrate on touch first, headcollar second - well really third, since I often use a scarf as an interim headcollar.

If your pony arrives with a headcollar already on you may well find that the pony will do everything it can to avoid having it's head touched again. It can be ten times more difficult to put a headcollar on a pony that has had one forced on before than one that has never had one on.  Ponies that have been halter broken instead of halter trained often need to wear a headcollar all the time because they cannot be caught otherwise. However by going back over the training that could have been done before, you can get off to a new start. 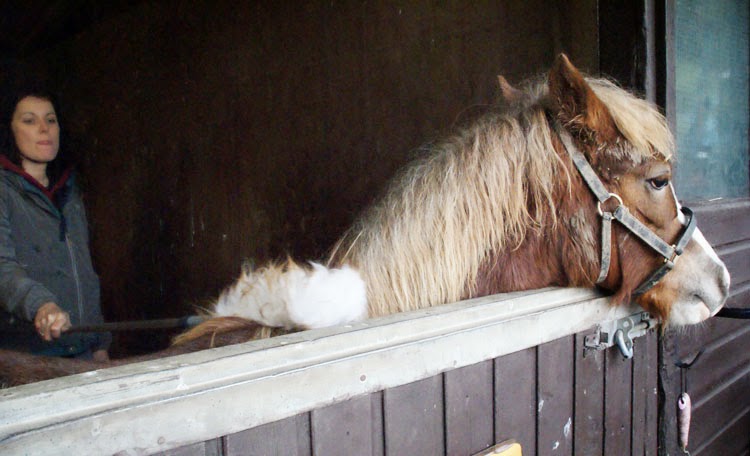 Fortunately Fleur's headcollar is leather so if she had got caught up on anything it would have hopefully broken. Nylon headcollars do not and instead it is the pony that gets injured or killed.

As you can see from the picture above, Fleur kept her head away from any humans by keeping it over the door - yes, she was also attracted to the light, and her field mate Trynke. Luckily she follows Trynke everywhere and this makes it possible to bring her in from the field.

We started from the beginning as if she had no headcollar on using the feather duster to establish touch along the rest of her body. At this stage she would only let us in to her left hand side (her 'guard' side) and kept her right hand side flush to the wall. 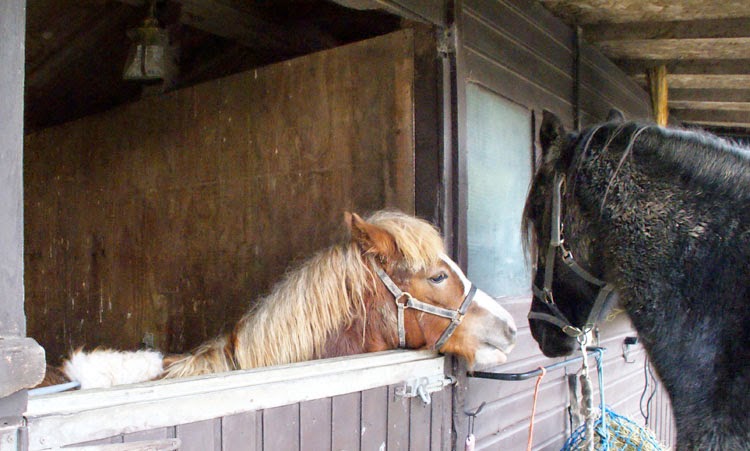 We started to work on her right hand side by just standing behind her and moving the feather duster over from the left of her bottom to the right and then working our way up to her withers. It's important to take the pressure off by going away from time to time just for a few seconds. 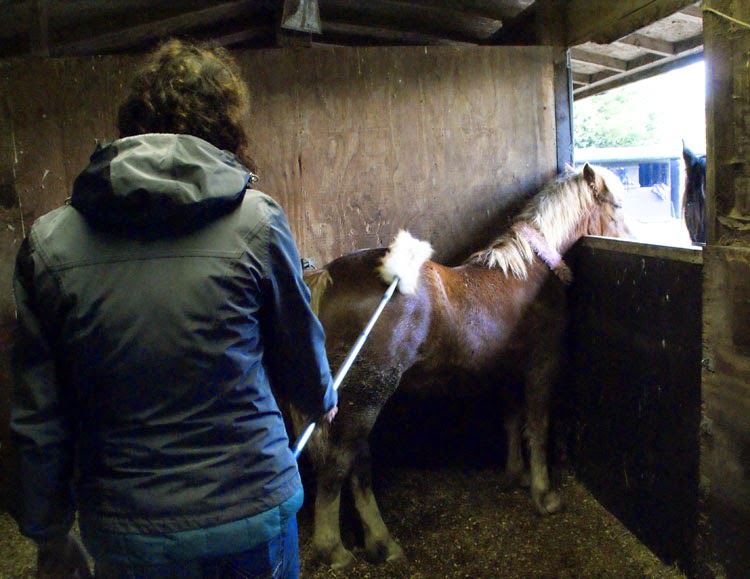 We worked with Fleur in little segments of about twenty minutes at a time. During the third segment she allowed me to put a scarf around her neck and to gently rub her face with it and my fingers. I was able to take the headcollar off at this stage. During the same segment, she suddenly opened up her right hand side and allowed Lisa to have greater access. It was such a deliberate move. 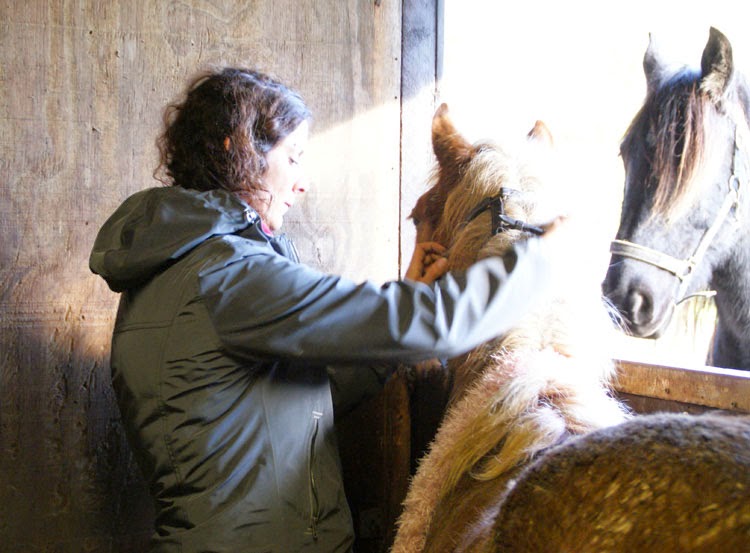 Here Lisa is putting the headcollar on using the technique described in No Fear, No Force. This is less intrusive and confrontational than taking a closed noseband  up the face and, because she was now accepting touch, the headcollar could be laid over her back easily and moved up her neck. 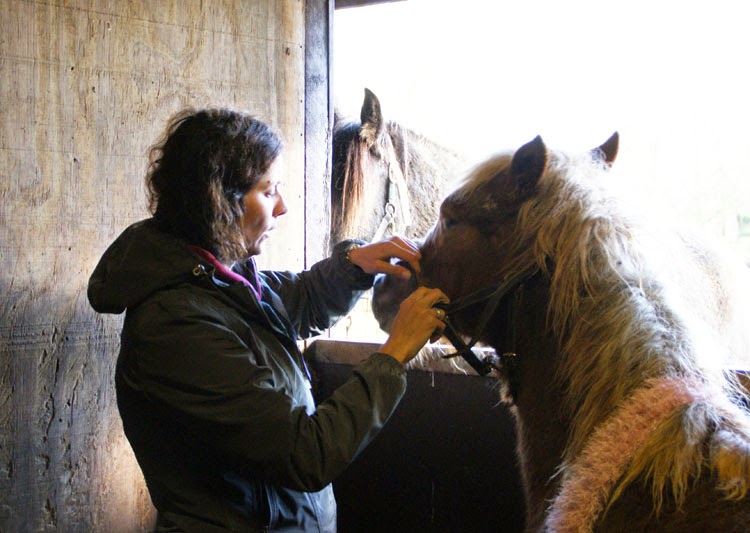 As we had practised going over her nose with the scarf, taking the noseband over her nose was no problem at all. You can see that Lisa is not looking her directly in the eye and she has an elastic hold on the headcollar  as she does the noseband up so that it not used to restrain the pony. 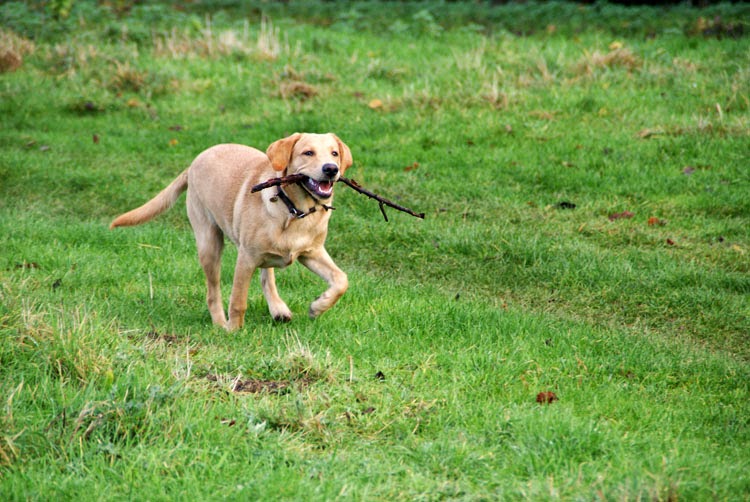 We gave Fleur frequent breaks and took Lisa's six month old Labrador puppy, Lexi, out for a good walk. She's allowed to carry sticks but not eat them! 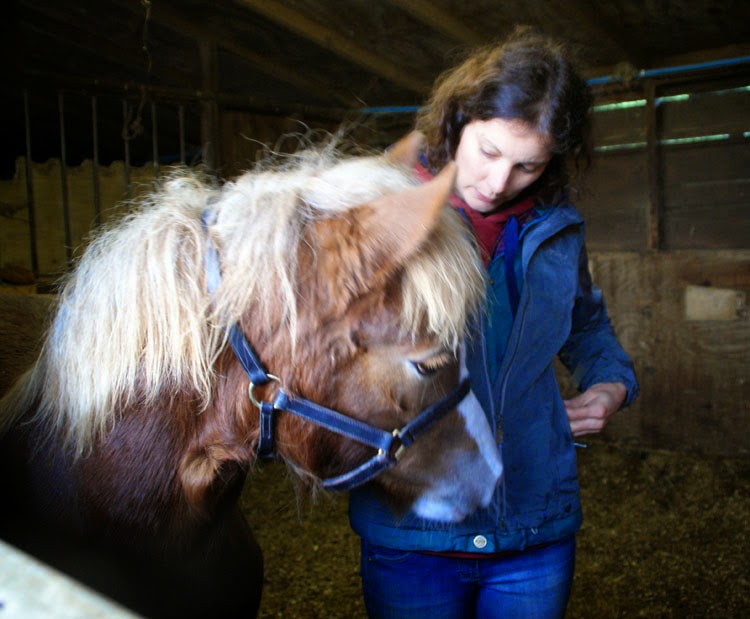 Back at the yard, which was a pretty busy place, I showed Lisa how clicker training can be used as an alternative technique for putting a headcollar on. Fleur is happy to take food from the hand and so by introducing a click (or three!) she learned that one click meant keep on doing what you are doing, and three clicks and a treat meant you've got it! Soon the headcollar was going on time after time and Fleur's head stayed in the stable! 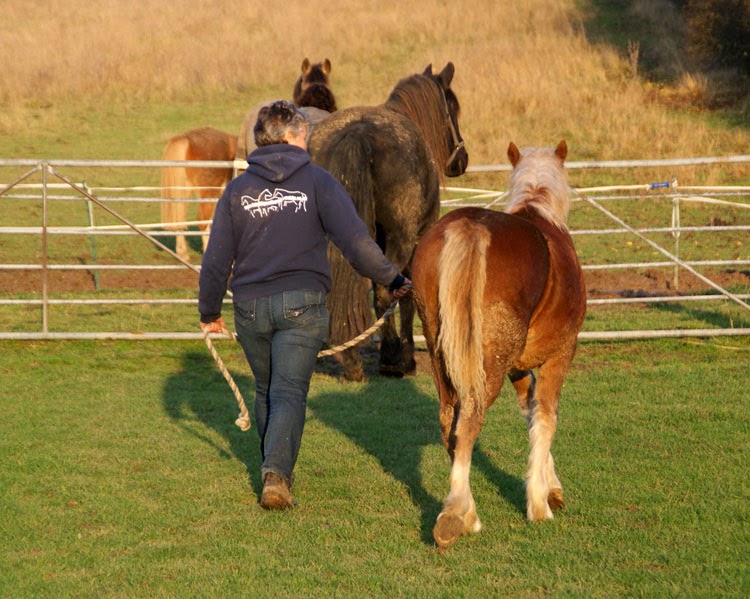 We finished with a tiny bit of leg handling - by now she'd done enough - before she was led out to the field and turned out without her headcollar for the first time. 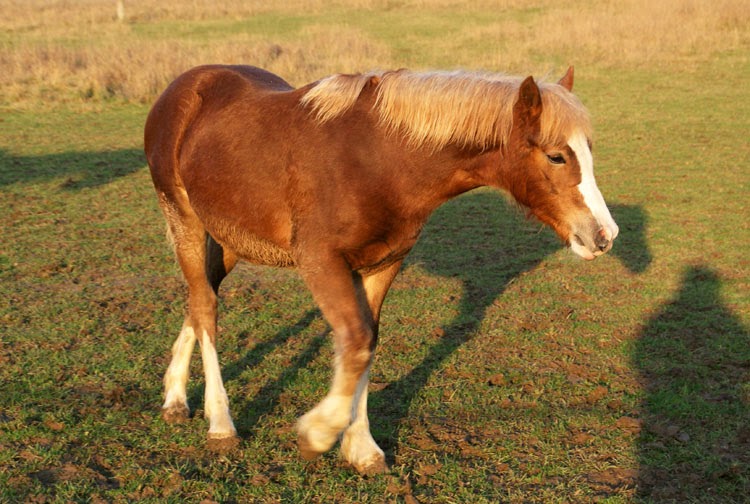 "Well we all came in again today... Rubbed with duster left and right side. Cuddled and played the head collar up the neck game complete with clicks - totally not bothered.. Bit cross that the treats didn't come all the time and a little in my face (or should I say pocket) trying to mug me! Ignored and only rewarded with click and treat once still. Had head collar on and off like a grown up pony too. Led beautifully to field afterwards... Not bothered removing head collar again and waited for click, treat and a cuddle. Onwards and upwards...Will see what happens now as won't come in again till weekend but will attempt some touchy feely in field!

Thank you sooooo much again and will keep you updated how we are getting on." LO


Posted by Loisaba Wildlife Conservancy at 10:35 AM