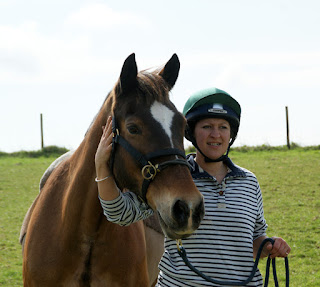 Yet another older loader this morning with an unknown history of loading and travelling. It was clear that at some stage Welsh Cob Molly has had some very high quality training under saddle but at other times she has had long periods of nothingness, just standing around in her field. It seemed that whilst Amy had many of the middle pieces of the jigsaw some of the edge pieces were missing entirely. Amy described her as "leaving her manners in Bromley!" 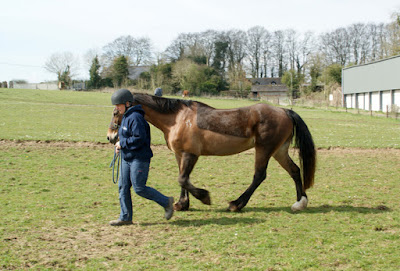 We started off with some straightforward groundwork in order to establish a few ground rules and the ability to move forwards, backwards and sideways as well as standing still when asked. She picked this up really well and was a pleasure to work with. 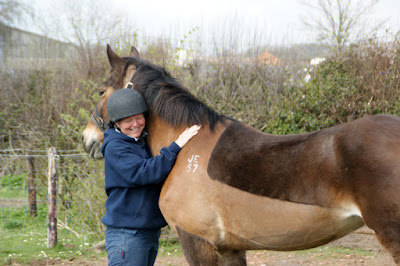 When it came to going on the trailer it appeared that Molly had a few doubts and I have to say, as I did on Saturday, that I have some reservations about the suitability of single trailers for travelling horses. For a start, on ones of this age, there is no internal catch on the jockey door so if you forget to leave the outside catches in the open position, you have no way of getting out if the horse does do something big. 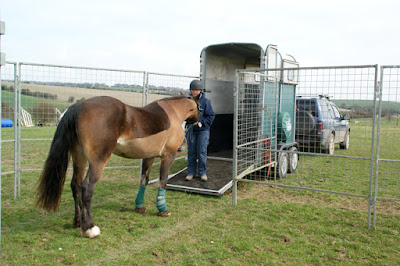 Although Molly has consented to walking on the trailer before today, she also walked straight off it again through the front door which had been left open. Horses, and especially those like Molly tend to want to go forwards, forwards, forwards when they are worried.  For that reason I don't work with horses with the front ramp down as I don't want to encourage them to see the trailer as a tunnel. For the same reason I would always want the front bar up first in this particular situation. 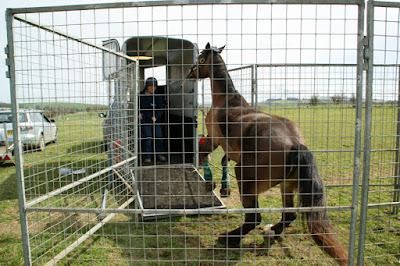 With the front ramp not available as a possible exit, Molly was less inclined to walk on to the trailer... 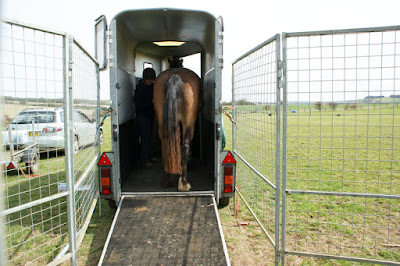 ...but after a little work which included clickered treats, she consented to do so; at one stage I did offer her a bucket to follow into the trailer but she was frantic with excitement and it was hard to control her, negotiate the bar, and control the whereabouts of the bucket - you don't want the horse to become unfocussed or to hit their head on the breast bar. You can see in this picture just how narrow the space is inside especially when you haven't yet gone under the breast bar. 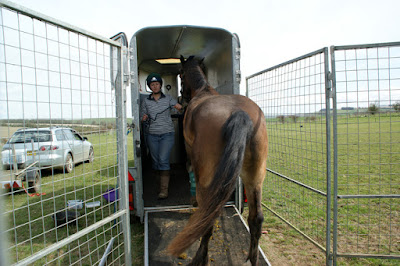 We worked on asking Molly to stay on the trailer for a little longer each time before backing her off at this stage. Once again I needed her to know that she has a reverse gear so that she isn't thinking forwards, forwards, forwards all the time.

Having loaded and unloaded her ten times, we felt that this was a good point at which to stop the session on this occasion.


"Thank you so much Sarah. It was informative and productive, and very enjoyable." AW