Busy Saturday with four horses to work with. I realise that I am often repeating topics although horses do seem to have an infinite way of expressing their feelings and finding their way down the river of life. None of them surprise me, none of them astonish me, they're all just things that horses do in order to survive in the only way they know how.

Fly is a 17 year old Welsh cob x Irish horse. Until about a year ago she would hack out easily on her own. More recently she has been ridden out with another horse and something about that has triggered an instinctive memory that horses shouldn't really go anywhere alone, even though that her friend no longer lives at the same place.   As I explained to Fly's owner that it is no use lamenting the past, or feeling annoyed, as neither will help to train her out of it.

Fly certainly didn't seem to be afraid of going out alone - she wasn't in the least bit spooky - but she seemed to have come to the view that horse's don't go anywhere alone.

There are two ways of working with nappy behaviour. The first for the brave (or stupid) is to actively engage with the no and go through and out of the other side of it. All very well for the gung-ho, and those perhaps prepared to use violence, but no use to anyone who is worried about what the consequences might be or having to live with their conscience. Pushing a horse through a psychological brick wall can lead to a sudden escalation of the behaviour and Fly had already threatened to buck and a rear and has backing up into places down to a fine art. 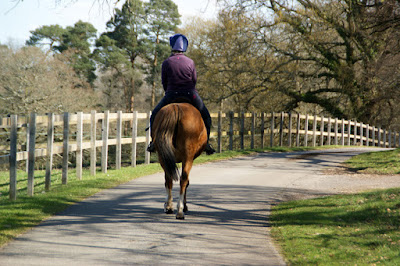 Fly sets out well but has two magnetic fields where she tends to get stuck. One is just up the lane from her field, and the other, inexplicably since she spends no time there, is at the stable yard along the way. Here she backs up at a rate of knots into the driveway. 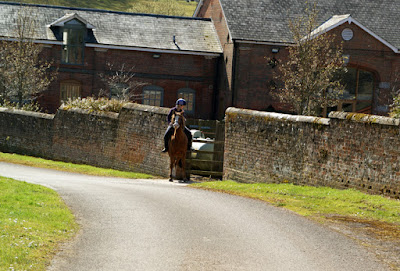 The second way of dealing with napping is to engage with the horse's yeses and maybes. We set Fly up with a clickered halt which could be used the instant she took a series of strides without applying her own handbrake. Meanwhile I asked her owner to concentrate on keeping her front feet moving to the left and then to the right by using her reins and focussing on where she wanted to go. This wasn't miles away, just the wall to the left and the hedge to the right, actively zig-zagging all the way up the lane. Whenever she went forward willingly in a straight line she was well rewarded in a timely way. 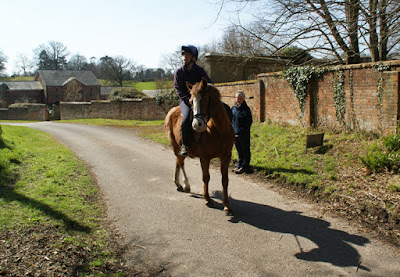 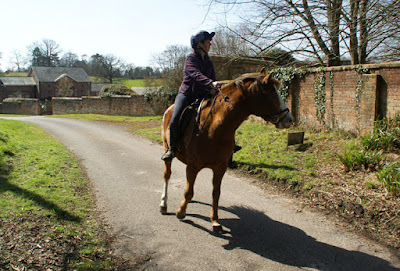 This took a lot of work but was far more successful than using her legs or the whip which just induce an into-pressure response or an escalation of her 'no'. This way she was re-directed over and over again. 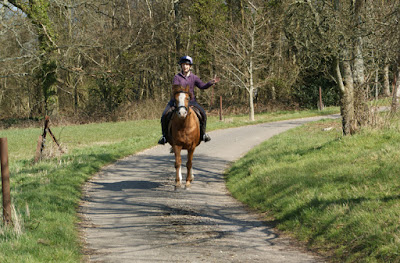 No nappy behaviour on the way back to the field of course...until she reached the stable yard again... 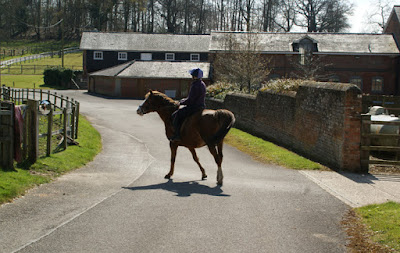 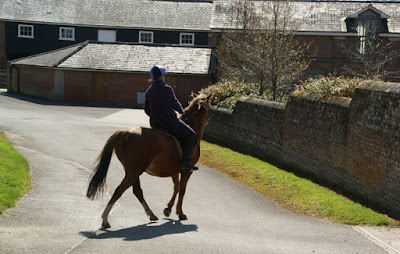 Once we were away from the stable yard again she loosened up for the rest of the ride home. 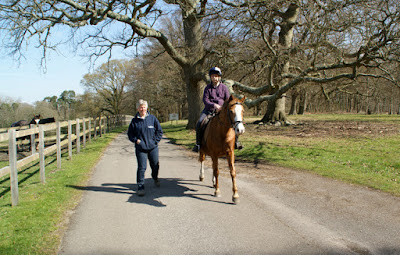 There is no doubt that Bev is going to have to be patient for a while while she gives this method a good chance to work but she has already been further today than she has been able to get for a few weeks. I know that there are trainers that will say that you must only ever guide the horse with your legs, and those that will say that you should only do it with your reins, or even that the legs are for the back legs and the reins are for the front. Whichever it is, if it is not working then maybe it is time to switch to the other even if it is just to keep the horse guessing.

"I have just read the report.  Thank you very much.  It sounds really good and I am so glad you liked Fly (rather than her growing on you lol). I was really happy with how today went and was so pleased we got her past the gate and stable block. I will try it after work next week - now we have the light evenings I have the opportunity." BW

Next stop was to see Sardine to go over some little bits of his groundwork and foot handling. His owner, Emily, seems to have found her own brave boots now she has a bigger pony and is doing really well with him. Here I am accepting him touching me without encouraging him to nudge. I wait until he has taken his head away and is peaceful and still before giving him a lovely rub. 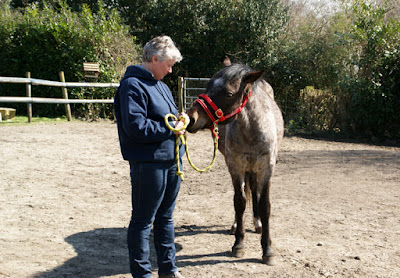 He has a little tendency to drag when he is being led and rather than pull hard on the Dually I am using a little pressure from behind to ask him to keep up with Emily. I may pat my tummy if he ignores me, and I stop the instant he has caught her up. 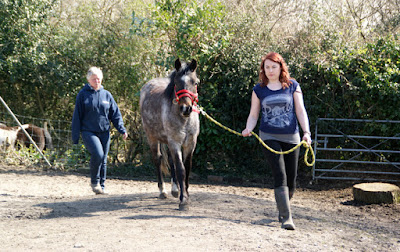 Rather than working out how to balance himself, Sardine had worked out how to get everyone to put his foot down. I'm helping to change that around. 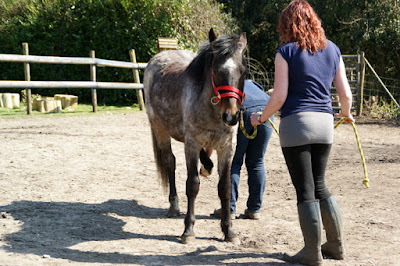 Now, this picture is not particularly pretty. I am reacting to Ted turning his bottom on me and threatening to kick; I'm only using body language and again patting my top. It is often argued that horses need to be left in peace to eat their food and in general I would agree. Nevertheless, it isn't a good idea to have a cute pony that is going to kick the first child that accidentally bumbles up to him while he happens to be eating his tea. Once again, this defensive behaviour is instinctive and understandable especially when Ted is the littlest in his field and often has to protect his food. However he does need to be taught that it is not acceptable, or even necessary, with humans. 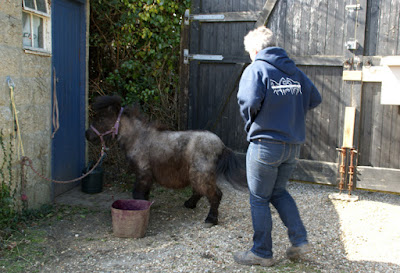 As soon as he turns his bottom away I can instantly take the pressure off by turning my body away. Later, if he doesn't present his bottom, I can thank him by giving him a lovely rub. 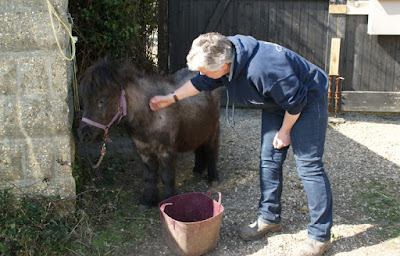 He is bound to make mistakes for a while, it is easier to react instinctively than it is to think and react in the opposite way, but plenty of repetition and pleasant reinforcement should undermine this behaviour quite quickly. 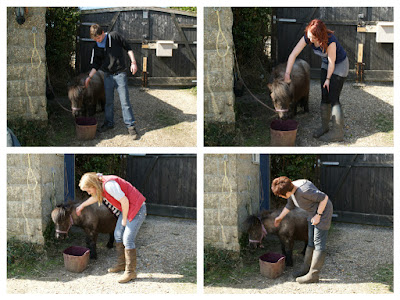 "...lovely to see you and thanks for the advice, which always works !!! x" LN

Last stop of the day was back at the farm where I always look forward to working with Bear. Today I just took him out for a straightforward walk but completely on our own. He didn't seem to mind in the slightest that he didn't have a horse for company but it was very difficult for me to take photos on my own because he is so happy to be close. 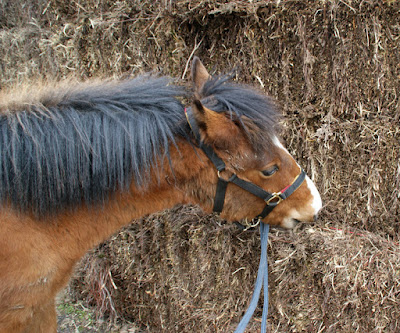 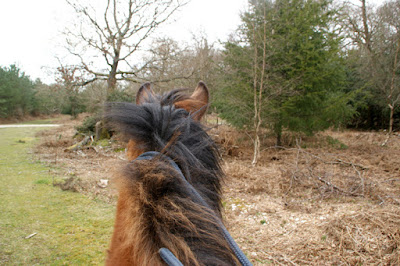 And finally it was good to see that the New Forest mares both still have their tail streamers on. 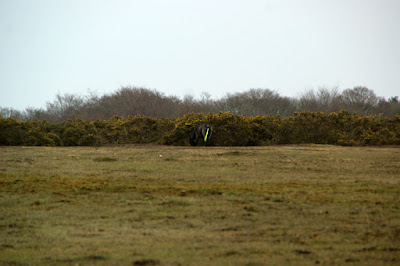 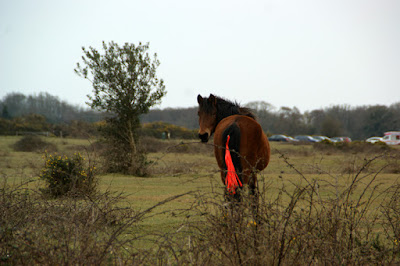