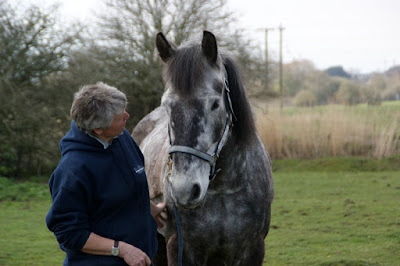 I was fascinated to read the breeding of this beautiful young horse, Jack. His sire is a Percheron and his mother a New Forest pony. He has inherited the best of both and has a great temperament too. I was asked to assess him and then to start work on overcoming his serious phobia of traffic. Not only is this critical for his own safety and his owner's safety but also that of other road users. We often forget that we owe a duty of care to everyone in a public place. 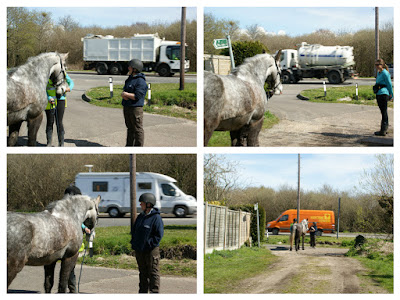 We made a good start using the track to his field and a well appointed layby set back from the main road. But main road it is with heavy traffic in every sense of the word. Having checked his groundwork carefully and with a Dually in place for additional control if needed, I used clickered treats in my usual pattern to reward him for standing still, or moving when asked, as the traffic went by at a safe distance. That distance varied but was never decreased by more than a few paces at a time, and he was backed up steadily but frequently in order to take any pressure off. He did fantastically well but this is only a start. 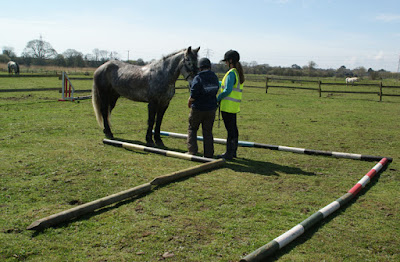 We finished the session with the L-shaped poles exercise or at least that was the intention. However, just as we were finishing two decent sized tractors came down the track both pulling bouncy, noisy trailers. Jack thought about turning and running but was distracted and convinced to stay by a well-timed click and a few carrots. 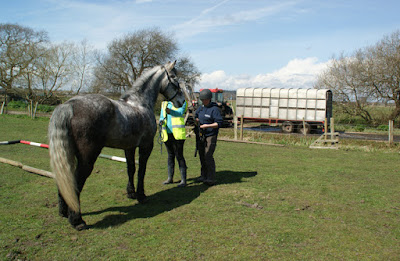 This afternoon we went out riding for the first time in ages. The weather and the pain from my shoulders has stopped me for weeks. For the first time since the incident with the horse in the box, riding hasn't made the pain worse. Fortunately Petra and Theoden seem to be horses that you can pick up and put down whenever you want to although I'm not too proud to get off if his adrenalin suddenly races up to a 9 out of 10. Yesterday he was undone at the end of the ride by a collection of things: a small Dartmoor type pony with a child in a yellow jumper on it's back, it's mate yelling from the fields across the green, two creepy dogs behind a fence that decided to come out and bark at him, and the odd donkey preparing to bray. We walked a fair way with him doing piaffe! I might make a dressage horse of him yet but I'd have to do something with his hair.