Think about if from your horse’s point of view. Why would he, a flight animal, walk into a small dark space with no obvious way out, be shut in, rocked and vibrated, deafened by noise, and taken away from his friends? It’s amazing that any horse would choose to load! Yet with good training and a bit of practice, most horses will willingly do so. 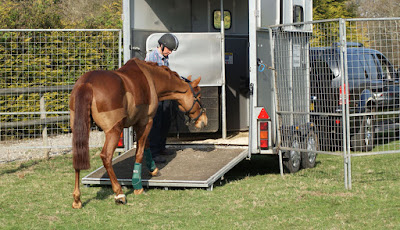 It’s tempting to think that if you have a good relationship with your horse he should load for you, however most horses are asked to load in a worry, in a hurry or in an emergency; the time when you’re adrenalin is at its highest and your patience at it’s lowest.

Have you noticed how many people come to ‘help’ when you’re horse won’t load? They appear from nowhere. Most are of the ‘you MUST’ persuasion and bring with them a variety of whips, long reins and brooms. They tend to take control of the situation, force the horse to load, and leave you with feelings of guilt and regret that you allowed someone to treat your horse in this way. Politely tell them to go away, that you have all the time in the world, and will get there in the end.

The best way of ensuring that your horse will load in any circumstances is to train him and to practice, practice, practice in a variety of situations. Training needs to be incremental and to start off with good groundwork, asking your horse to move forwards, backwards and sideways at your request. 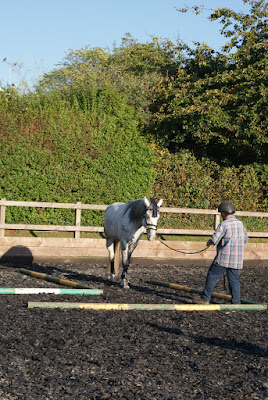 Myth number 1 – My horse is just stubborn
Your horse always has a reason for not wanting to load, even if it is out of date! It may be instinct, fear, or the manner in which he has been handled in the past. Once a horse has developed a strategy for not loading which has worked he has done his job. In his mind he is keeping himself safe. It’s your job to convince him that there is nothing to be worried about.

These boots tend to cause more trouble than they solve. They can make your horse feel very hot and uncomfortable encouraging him to rub at them. They tend to move and fall down so that the horse treads on them and panics when he thinks that he can’t move. Well fitting sports boots offer good protection without overheating and upsetting your horse. 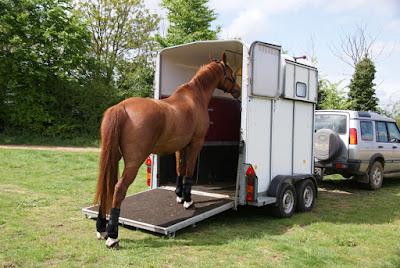 Your horse may feel very restricted if you hold him close to his head. It’s better to give him some slack in the lead rein, which should be 12’ long, and only put pressure on his head to ASK him to come forwards. Have your hand palm down on the lead rein as if you were riding a bike - this will give you greater control and feel. When approaching the trailer, walk next to his head rather than his shoulder.

Myth number 4 – If he stops, don’t turn and face him!
It’s perfectly okay to turn and face your horse when loading. If you feel resistance as you approach the trailer, turn and face him but look at his feet rather than straight into his eyes. Eye contact may stop him in his tracks whereas you are simply interested in whether his feet are moving. Make sure that there is some room for him to come forwards and then start using a little pressure on his head to ask him to move. The instant he takes a step towards you, release the pressure on his head so that there is an obvious benefit to him. If he doesn’t come forwards, you can try a stronger pull on his head with a definite release, and you may well find that he comes in to that release. During initial training, you may want to back him off again for three strides before ask him to come forwards slightly more each time. This has the effect of relaxing the horse as he realises that you are not going to force him all of the way in in one go.

Myth number 5 – if he plants on the ramp, just wait and he will eventually load.

He may do. Alternatively he may just grow roots that are longer and longer – hence the term ‘planting’! In this situation you could use angles to ask him to move sideways so that standing still is not an option. This will stop him going to sleep on the ramp as a result of the release of endorphins as you pull harder and harder. You may find that a training halter will help you here but they need to be used judiciously and you may find that the ones with thin rope over the top of the head encourage the horse to rear.

Myth number 6 – if he steps to the side of the ramp, turn him around and approach the ramp again.

This technique is a really good way to teach a horse to step to one side of the ramp because that is all he needs to do to stop anyone asking him to load. Most modern trailers have low ramps that can be stepped on easily from any angle and your horse is quite agile. If it is safe to do so, continue to ask him to load from this position.

Myth number 7 – if he won’t load it’s okay to tap or hit him with a whip to make him go forwards.
It’s true that a horse that has been encouraged to go forwards with a whip or even a broom is likely to load on that one occasion. However there are some dangerous side effects to this method of loading. If your horse has been hit on a previous occasion, he is more likely to refuse to go anywhere near the ramp at all, to kick out or run backwards when approached from behind, and to be agitated when he is actually in the trailer.

Myth number 8 – using panels to load a horse won’t teach him to load; you can’t take panels with you everywhere.
In a training situation panels are simply an extension of the trailer and can be used to create a safe space. Rather than using them to force the horse to go on, they can be used to encourage the horse to engage with the trailer and to flow on and off. As the horse begins to relax and to realise that he is not in danger, the panels can be removed one by one until he is loading without them. It is unusual for a horse to go on strike about loading once he has been taught how to do it quietly and repeatedly, using the panels. 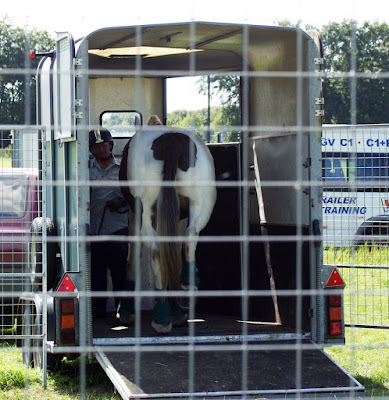 Myth number 9 – Once the horse is in, slam the ramp shut and get moving!

If you train your horse incrementally and use the back bars and front bars to contain him, the ramp can be closed very quietly, talking to him all the time. Part of the training is to teach your horse that he may have to stand in the trailer while it is stationary for a period of time. Give him a haynet to keep him occupied.


Myth number 10 – "As soon as my horse is in the trailer he rests his foot, this proves he was just being stubborn!"

In fact this is more likely to be a ‘running foot’, a sign that the horse is not relaxed and is reserving the right to run, like Usain Bolt from the starting blocks, if anything goes wrong. 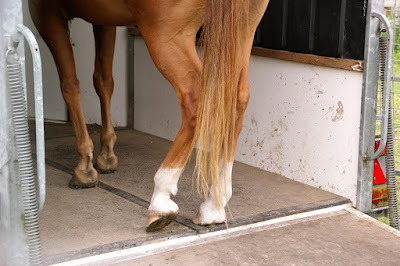 Well, yes and no. The disciplined use of food to ask a horse to load may well help and it may be enough to have a nice scoop of feed in the front of the trailer for when he is fully loaded. As a personal choice, I often use clickered treats to reward a horse for coming forward on to a trailer but I am careful to make sure that the horse doesn’t train me by taking one step forward and then two steps back. I find the click makes sure that the horse doesn’t look for food unless he hears it but my timing has to be very accurate if I am not to reward the horse for behaviour that I don’t want. If your horse is too food orientated you will need to take care with this, and it is always better to introduce food treats as part as part of a properly considered programme.

Myth number 12 – If I can’t get my horse to load, I can always have him sedated.

I would question whether you would really want your horse to be dopey while he is travelling. Balancing in a trailer is actually hard work for a horse – hence many don’t want to load again to come home after they have done even more work at an event. Horses that have been sedated are often disorientated when they come round, and some come out of sedation explosively, creating a real risk of injury. In an emergency a vet may agree to sedate your horse to get the job done but it is not a long term solution and may cause more problems than it solves.
Posted by Loisaba Wildlife Conservancy at 9:51 AM