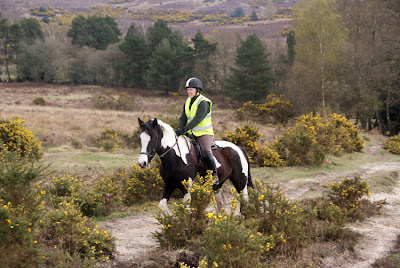 Coco stepped out confidently again this morning and had to contend with a variety of things that you meet out n the Forest including a yearling lying down in a dip at the top of the hill and a dog that was vigorously digging right by the gate, oblivious to anyone going by. He also had a large bell around his neck that rang out loud and clear as his feet went round and round. It was a branch that was Coco's undoing which went crack as she rode underneath. I spent the next section of the walk continuously breaking twigs right next to her until she stopped reacting each time and had a nice lick and chew. You have to think of everything! 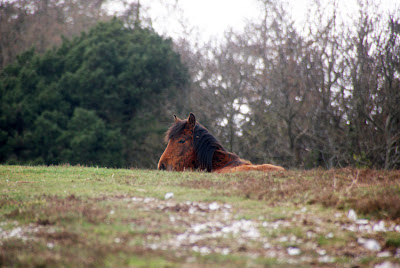 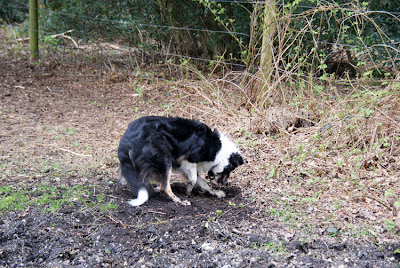 This afternoon it was off to work with another Irish cob with foot handling problems - it seems to be such a common problem with horses imported from Ireland through dealers. Things have deteriorated to the extent that the farrier can neither get a new shoe on one foot or take off the one he has managed to get on the other. This horse has developed a variety of strategies to stop people handling his feet including attempting to stand on top of the handler's feet and slamming his foot down once it is picked up - nice! I suspect however that he has never been taught how to pick his feet up nicely in the first place nor learned how to balance himself and that trimming and shoeing has always been achieved through brawn.

It was a strenuous session for me but using clickered treats made it a lot lighter than it could have been. We moved from just being able to touch his leg, to asking him to pick one up and to be able to hold it for just a couple of seconds. This might seem like slow progress for one session but it is pretty fast progress for clicker and I have asked the owner to make sure that she re-establishes and consolidates each individual stage before asking him to hold his leg up for longer. Fortunately she has got all the time in the world since she loves every other aspect of this horse and has no intention of letting him go. 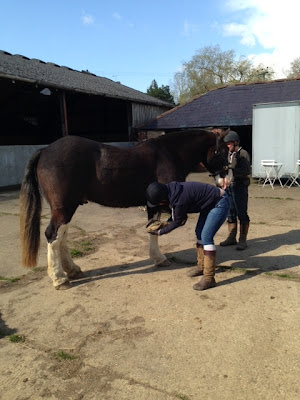 Update ONE DAY LATER: "10 seconds on the front legs and 3 sec on the backs!!!! Can't believe! No discussion lifting his legs so relaxed. Letting me put his feet down , no stamping with his back feet!!! I'm blown away. Perhaps tomorrow will be different but today, we are flying high. Thanks again for your help. " KA

13.5.13: "Well the fronts are still going up nicely, the backs are still a little stampy, if you know what I mean. I can't hold them up yet for more than a second or so.It will take a while but we are still working in the right direction. At least I can now muck his fronts out." KA