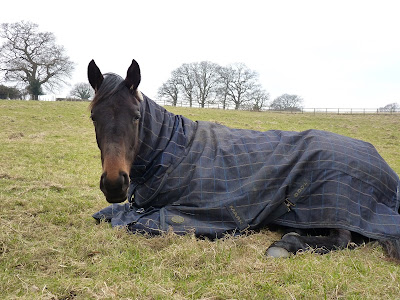 It's been a week of happy reunions. My second visit this week was to Leah, a two year old Thoroughbred. Since my first visit two months ago her owner reports that Leah has been much easier to handle and is much happier in the stable. Wednesday's mission was to work on handling her feet as it seems that until now this has been more a triumph of brawn over brain. Time to teach her how to pick her feet up willingly without wafting them around or even taking a well aimed kick at someone. For the front legs this was pretty straightforward but for the back I resorted to the walking stick so that if she wanted to wave her leg around, she could do so without hurting me or learning that that got me to go away. Within an hour she was much calmer about the whole thing and began to see that she could earn a lovely rub just for letting me move her leg.

Next day it was off to see Bluebell who I haven't seen since I halter trained her as an eighteen month old filly. She has now been backed and her owner has done a really great job of preparing her. Our role, Charly and I, is to bring her on a little through the faster paces and to add a little mileage to her 'clock'. She has grown into a lovely mare with a bit of character - she expresses how she feels in a very transparent way so that you always read what is happening. We go back again on Monday.

Then yesterday it was back to Brandee who needed to be caught for the farrier. As the farrier was an hour late (and very apologetic), I spent an hour just cuddled up with her to keep warm. I don't know whether it is the effect of going from a very hot climate to an unusually cold one but I was losing the will to live.

Today it's back to Sian with Coco and Rose to see what progress she has been able to make, if any, while I have been away. The weather has been against everyone and next winter I may consider hibernation as a realistic option. 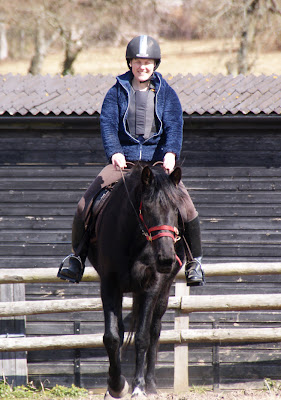 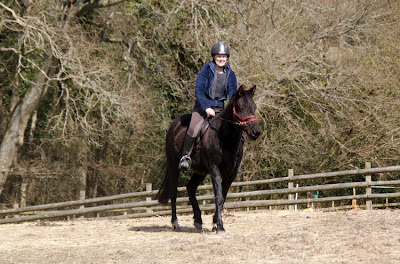 Postscript: All is well with Coco and Rose and we'll be able to progress from here providing the weather doesn't get in the way again. Julie and I were even able to take Theoden and Petra out in the sunshine later in the day. 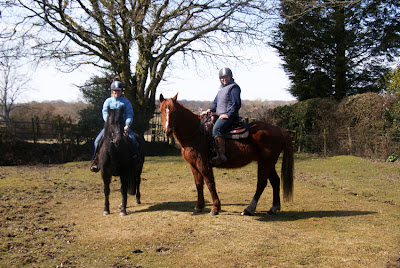 Posted by Loisaba Wildlife Conservancy at 10:27 AM