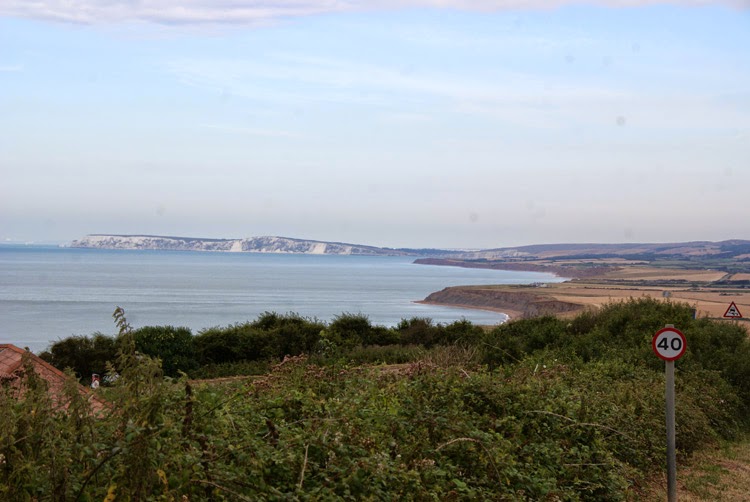 Change of office this week, staying at Jo's lovely cottage at the far end of the Isle of Wight. A total of seven different horses to see starting with four year old coloured cob Indy. Despite a lovely open face and a youthful air, Indy has arrived with plenty of baggage. He is just so strong and has redesigned gates and posts by pushing them or pulling them. Although he is only 13.2 hh he feels like a much bigger draft horse. This instinct coupled with a natural power has been reinforced somewhere along the line where it has worked for him to get him out of something he didn't want to do and to get him somewhere he wanted to be. I seemed to spend the first ten minutes with him saying no more often than yes but the when the penny dropped it dropped completely and he started to listen intently. After that I asked him to move forwards, backwards and sideways, step by step, all very gently and he proved to be light and agile. On day two he showed once again that a horse's disadvantages are his advantages and was absolutely bombproof in the face of plastic bags, umbrellas, the tarpaulin on the ground and on his back. We also set him up for long reining so that he can learn some direction without having to do lots of circles since he has a tendency towards locking stifles. By the end we felt that he has earned the right to wear a rosette (although I am sure he would have preferred something edible). 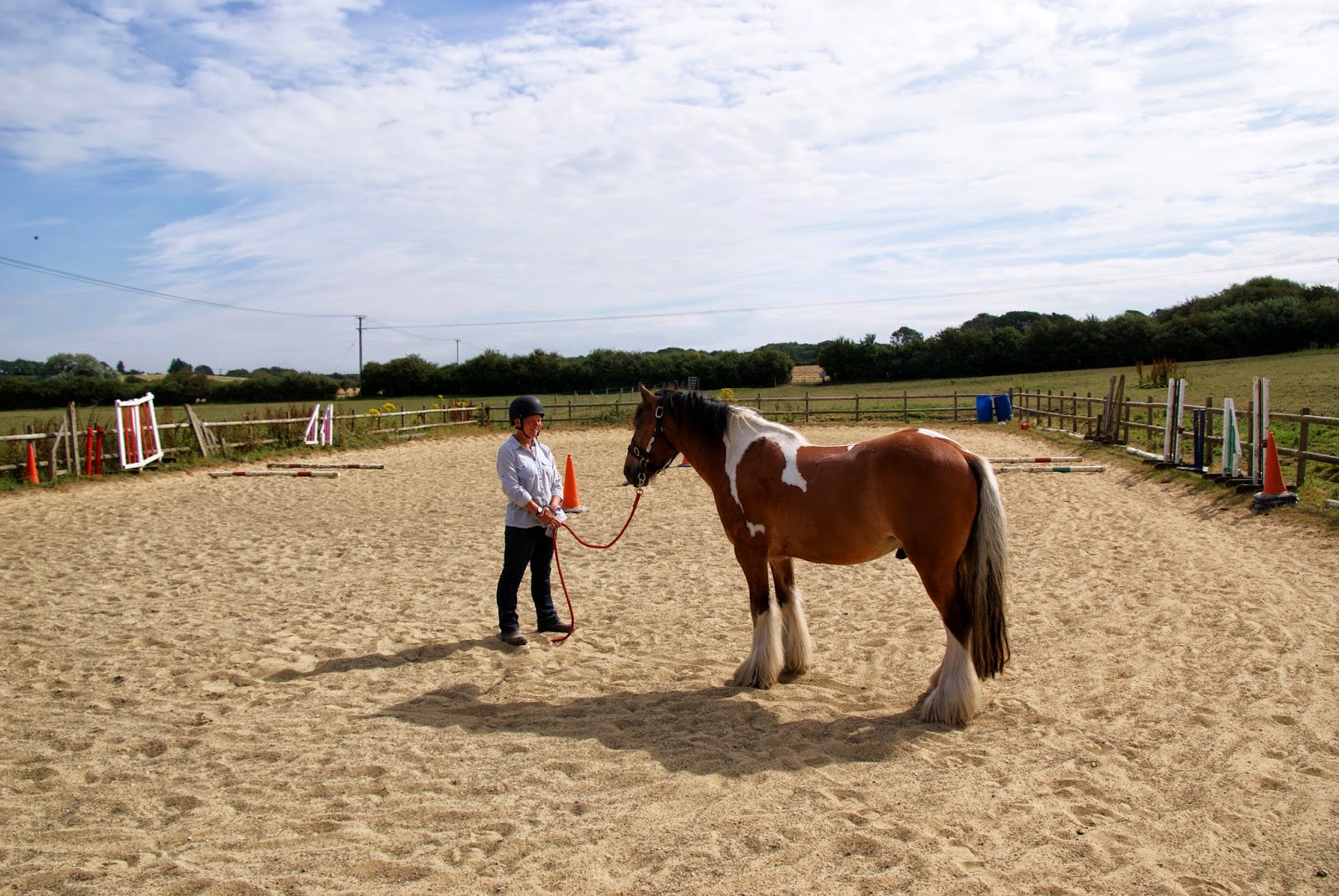 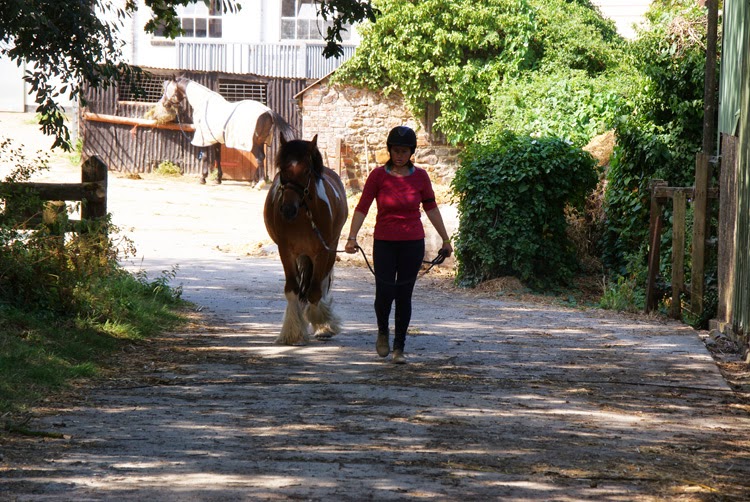 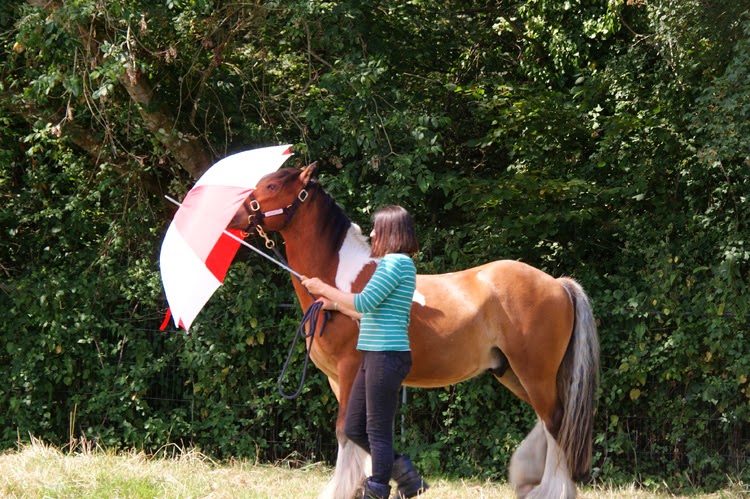 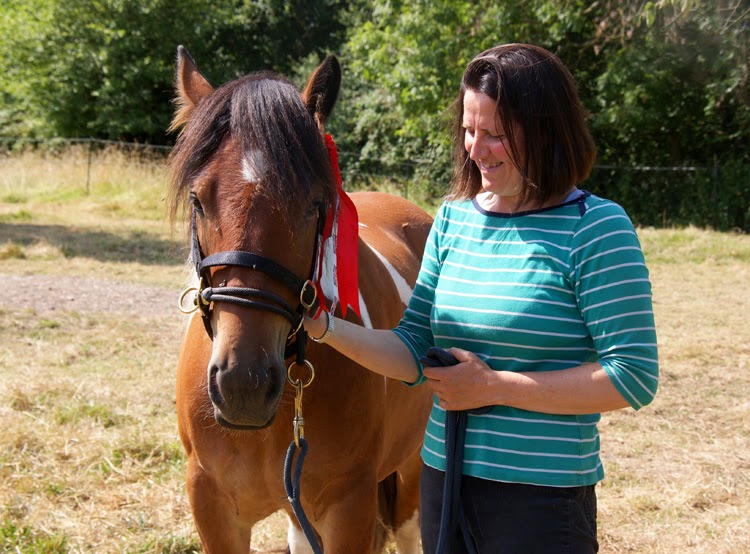 It's always a delight to see Debbie and Dillon. Debbie because she is always beaming these days and Dillon because he's started to enjoy his life instead of resenting everything that he is asked to do. It just proves that all he needed was to be asked the right way. When I first met Dillon he was sick, sick, sick of saddles (which had hurt), sick, sick, sick of schooling and really sick, sick, sick of people. Debbie will admit that she was ambivalent about whether to keep him and wondered what she had taken on. She has done everything within her power to make him comfortable including having a back therapist out to him and I can remember last summer lining up saddles for Dillon to try on as if it were a shoe shop. He was so clear that he did not want an English saddle anywhere near him and the only saddle he didn't react to was a little Western that we had at the time. Even that saddle wasn't ideal but he was so adamant that that was the one he wanted, demonstrated by a willingness to have it on his back and to go forward when ridden that we knew it was the answer. Debbie got him one of his own, beautifully fitted, and they have not looked back since. From those early rides with me on foot, she has ventured out with great friend Annie on a bike, and overcome his fear of everything he saw. 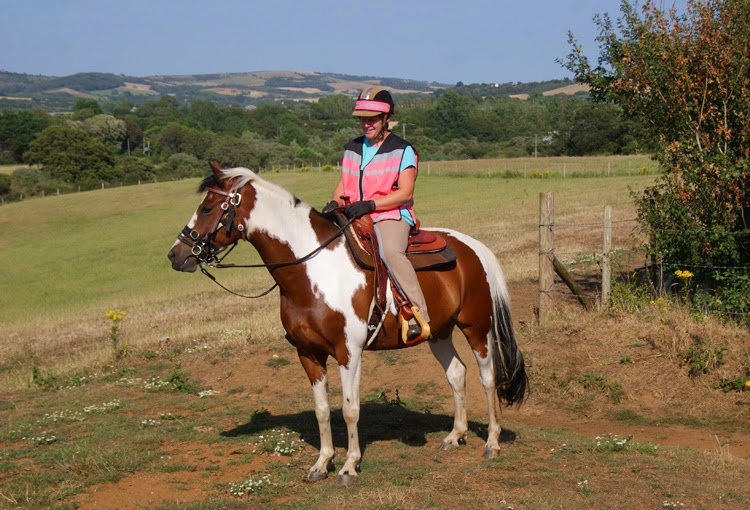 This time round, Dillon was happy to be schooled in the field and we kept him engrossed by changing the exercise every five minutes so that each task became a holiday from the one before. In this way we got him to give a 100% walk, even away from the gate, to start giving the bit for a few strides at a time, to turn on the forehand and rein back without running back as he is prone to do, and to accept directions around barrels on the ground. Even so, the real highlight for me was to accompany Annie and Debbie on their respective horses out on a hack and to see Dillon negotiate a boardwalk, cows, endless bicycles, bridges and roadworks without a murmur. He looked and felt happy and relaxed; engaged with life. 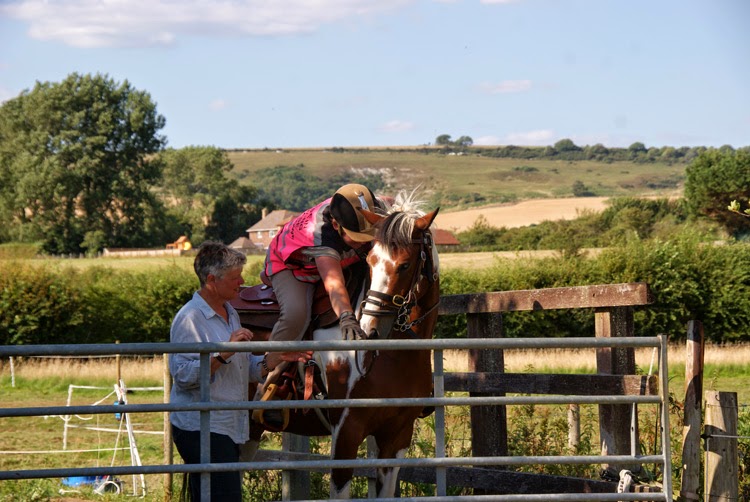 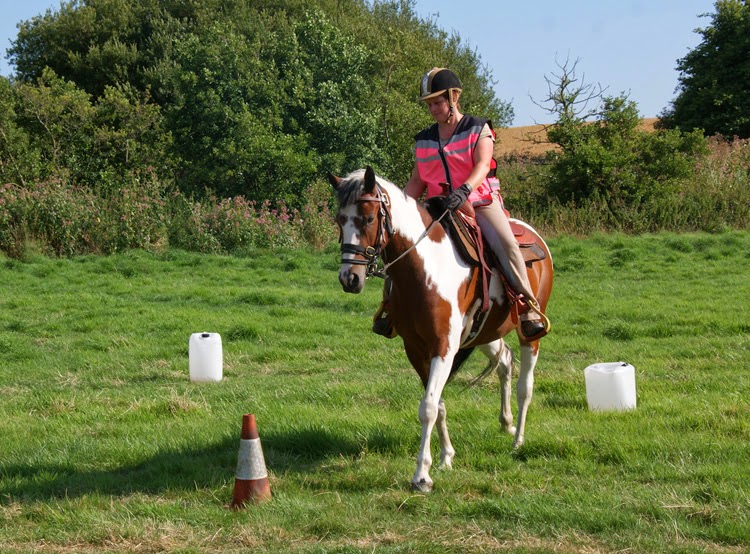 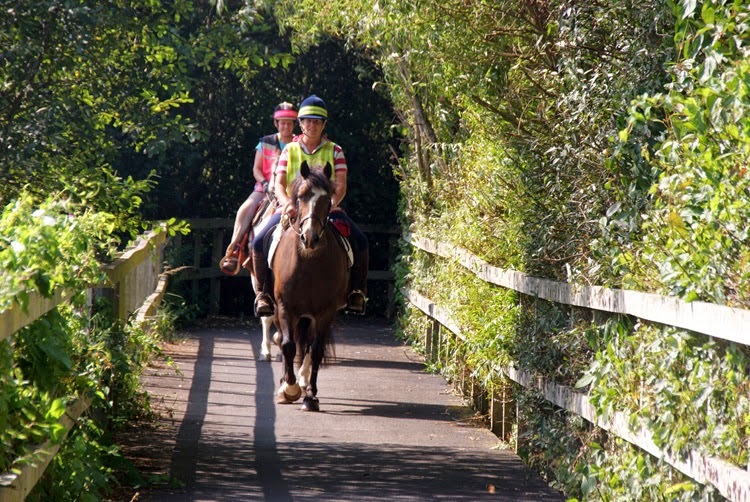 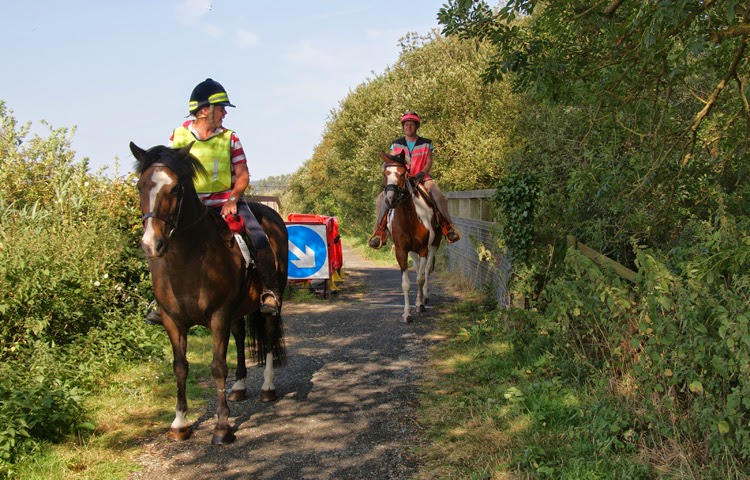 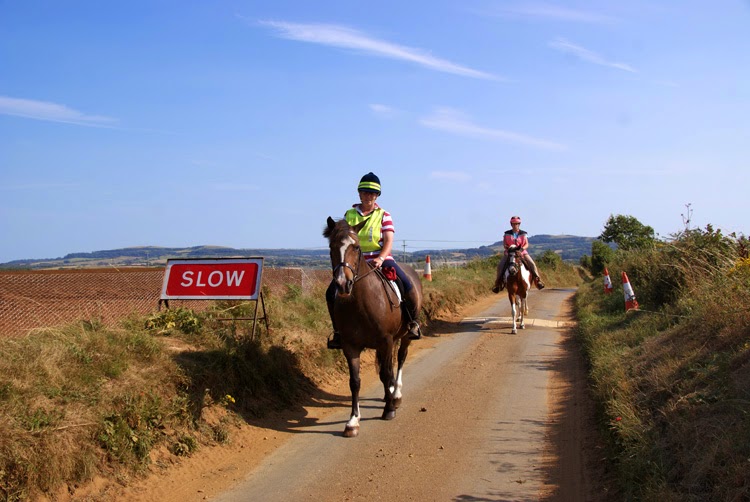 It's always fun to visit Jane and her three characterful Shetlands. I'm not really sure I should be paid to do this since it takes me back to my childhood when my friends and I would set up jumps around my grandparents' garden and 'canter' around them on our own two feet until one of us fell over and scabbed up our knees. Jane has been happily painting coloured poles and road signs in between constant bed changes and greeting the guests that turn up at her hotel. Outside in the hotel grounds there is now a veritable agility course. 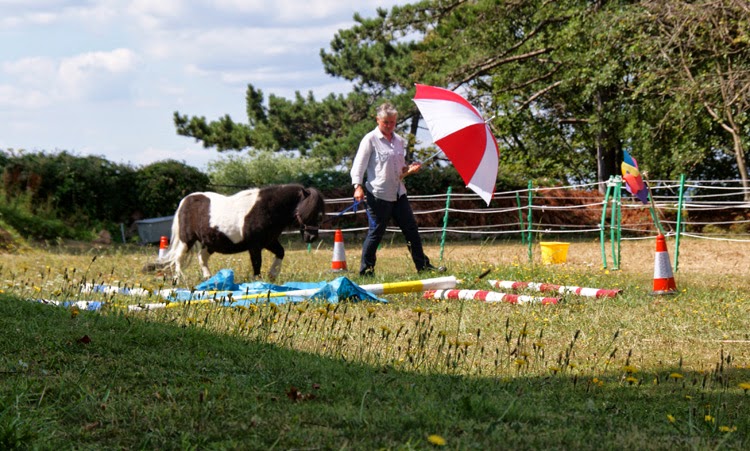 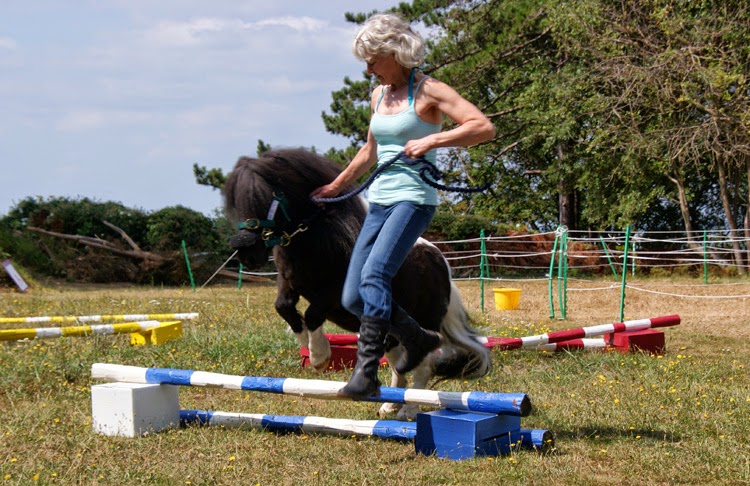 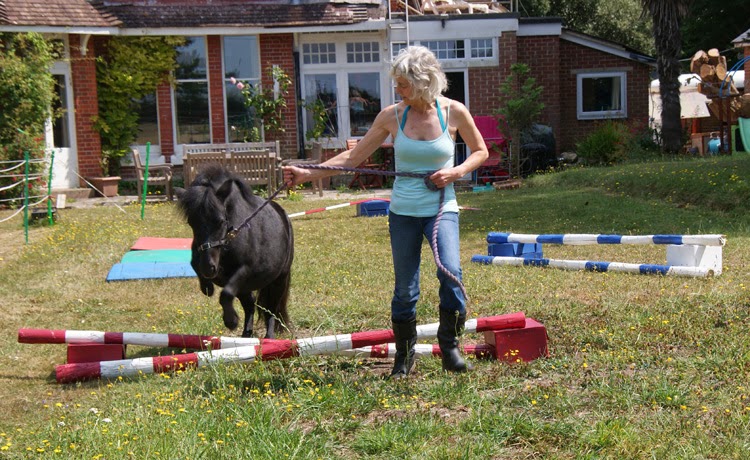 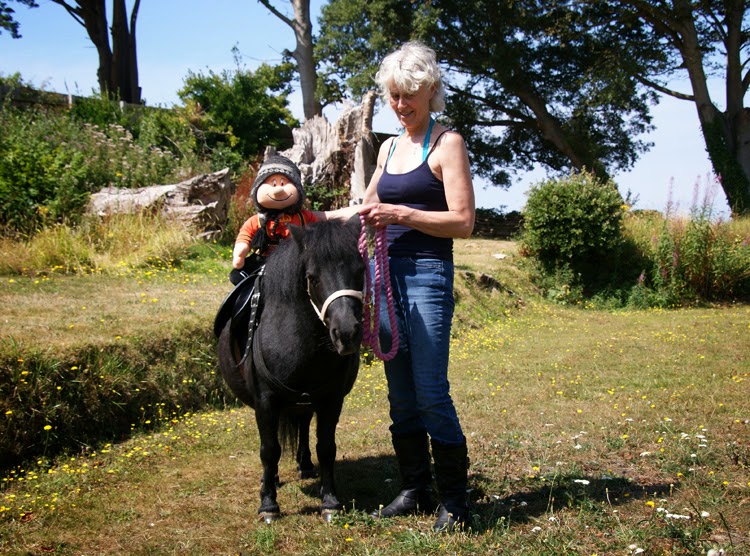 Magnus, Annie's posh New Forest pony, knows more about dressage and showing that we will ever know but he is still game for some fun. Bright colours, streamers and ribbons are all old hat to him and he was happy to humour us. 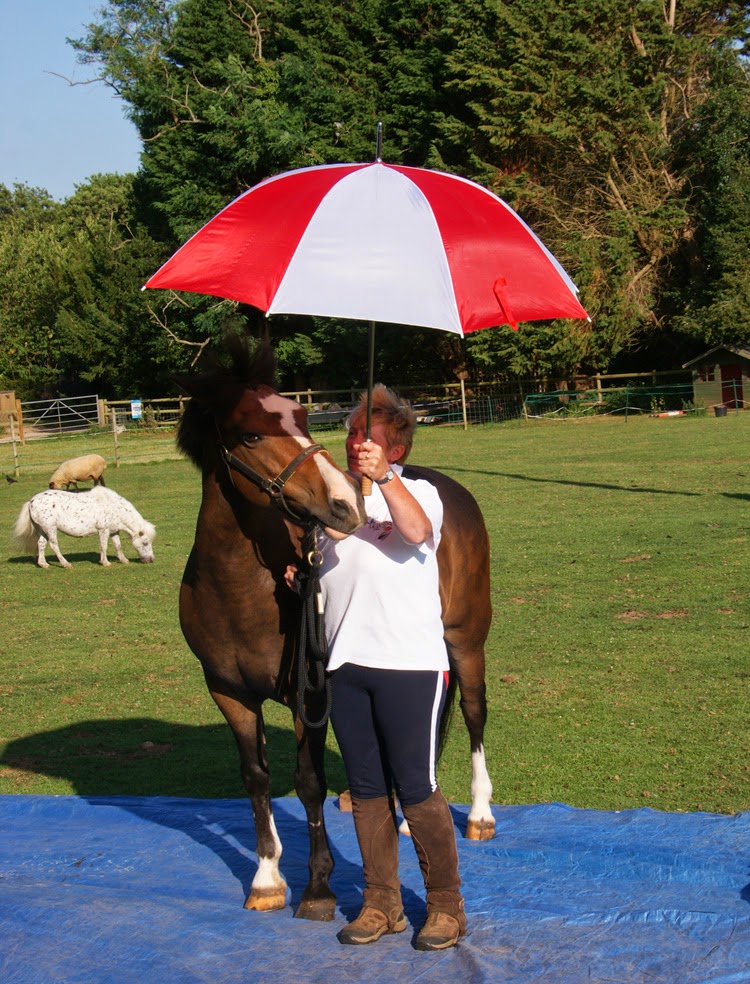 Jan's new horse is what you might call a full up New Forest pony. In fact he has been X rated because he grew oversize. He is all in proportion and looks magnificent. Little wonder then that he needs a wide saddle and can take an extra inch along his back too. Saddles are not easy to get hold of on the Island as they inevitably need a saddle fitter to come over from the mainland which limits choice. Still, it is not Kenya (!) and therefore not impossible. 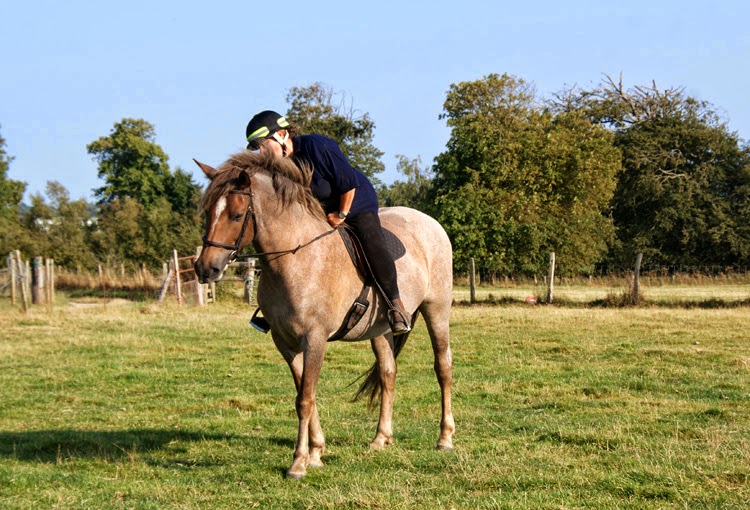 Because of an injury Jan needs to be able to get on and off Merlin from the right, something that he is very happy to accept in principle. I was asked to train him to 'park' himself and stand very still at the mounting block. We made a good start on this, using clickered treats which he thought was marvellous. However, we limited the session so that the saddle didn't undermine what we were trying to achieve and I've left Jan with an easy pattern of training that she can continue once we know for certain that he is comfortable.

There are always some key points that came out this week:

1.      Instinctive, defensive, behaviour which is reinforced by humans will have THREE times the power.
2.      Show a horse something clearly THREE times and we will have got it for life.
3.      A FREE horse is never a free horse – they are always on the liability side of the accounts. 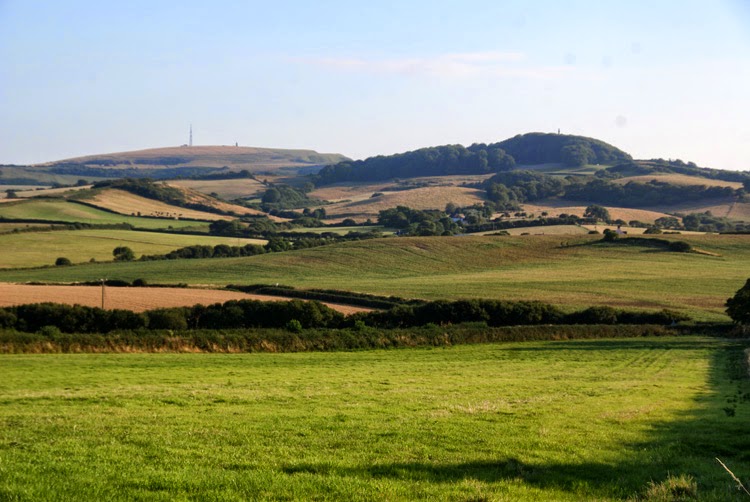 "Thank you so much for the last few training days it has been so rewarding and such fun...We have achieved a lot of different things this week, a huge thank you."JB

"Thanks for a lovely week, both participating & spectating. As always, wonderful to see you - you're like a huge in breath of fresh air. Time spent in your company is like having cataracts removed! (well that's how I imagine the clarity of sight you bring with you)." AD

"Thanks again for a fantastic week of sessions they have opened up my eyes yet again some things are so simple yet so effective and it is such a great feeling to feel Dillon's reactions, the releasing of my tight areas and him stretching out was quite amazing,  I felt we came along in leaps and bounds this week and I now have a variety of tasks to work on. He is having the weekend off he looked sooo tired this morning but again as always after we have a session with you I feel so much closer to him and our bond always feels much stronger." DW

"Thank you for the photos and notes (which I have read twice) my family loved seeing what we have been up to! Indy was very good for the farrier on Wednesday afternoon despite being a little stiff. I asked him to remove his back shoes and he seems happier for me to lift those back legs now. He is calm in the field and comes to greet me, not entirely respecting my personal space yet but I am training myself to respond appropriately!! Many thanks again, hope to see you on your next visit to the Isle of Wight!" NW