It's an interesting thing with horses that the more precise you are the more safe you will be until the day when you forget to be precise and then the more safe you will be the less precise you have been before. Let me explain what I mean. If you follow the BHS procedure for putting a rug on and taking it off a horse, it should keep you safe, since it involves precise and predictable steps, folding the rug and tying up the surcingle straps. However, if someone else came up to the horse and threw a rug onto it without folding it up or tying the surcingles together, it could well freak! The art is to start off precise and then train the horse to accept small 'mistakes' and then larger ones until the horse becomes fairly blase however you do something - taking care of course not to sock the horse in the tummy with loose straps. Petra used to be terrified of rugs but now I can throw them on her with gay abandon.

In Beau's case, she is quite worried about her rug being taken off because on one occasion someone forgot to undo the leg straps and she took off with it around the field while it was still flapping around her back legs. Big mistake. Even though she has her rug taken off on most days of course that is only happening once. Kimberley takes great care to do it slowly and precisely, folding it back and pulling it off really gently. Even so Beau looks apprehensive and moves her bottom away to the right as if she thinks it might chase her. 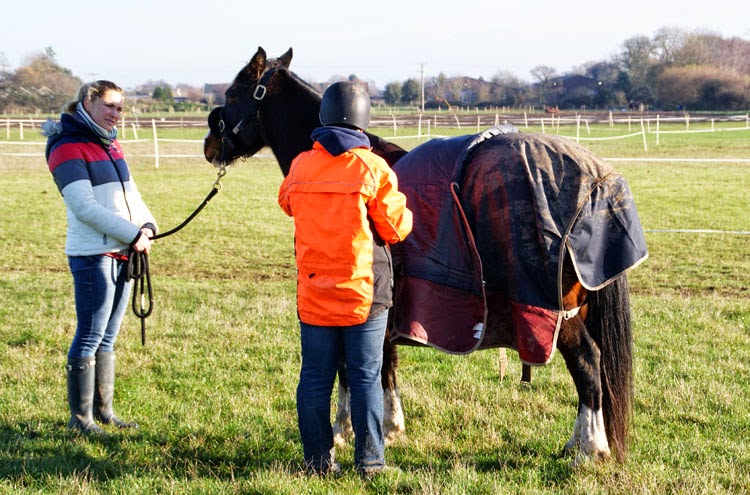 Working on the theory deal with what you have got today I started today's session by taking her rug off ten times in succession and noted that she got calmer and calmer each time I did it. Kimberley, who always does her homework, will now repeat this over and over again when she's got the time and, once Beau is relaxed about it from the outset, she can work on being less precise about how she does it. 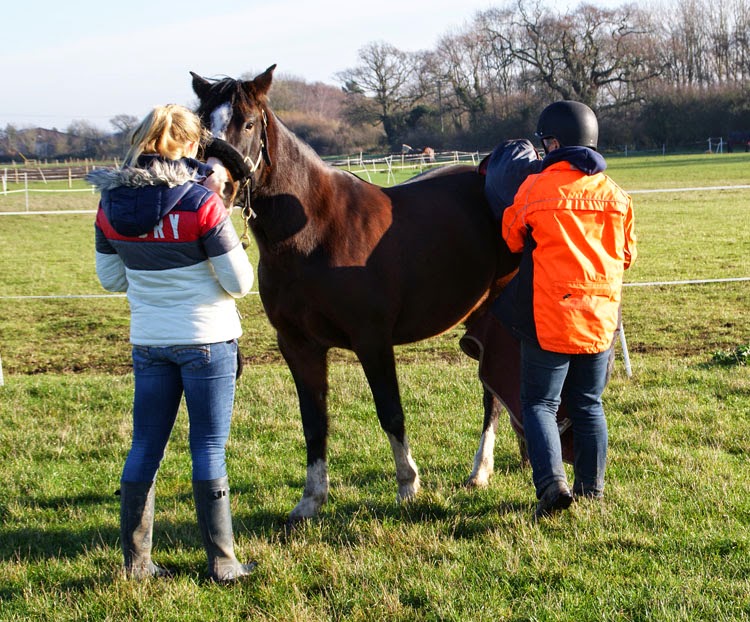 Beau's move of the head to the right here is significant because it shows that she isn't preparing to dash sideways at the back in order to get away from the rug. Progress! 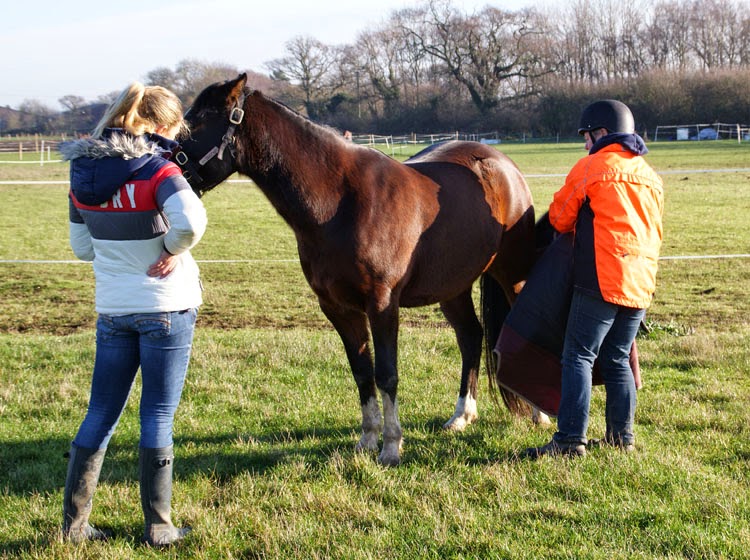 The whole subject for today's session was desensitisation and it's fair to say that Beau will need quite a lot of it - particularly when it comes to things approaching her body with a human on the end. It's no good her being ride-able if no-one else can go anywhere near her when there's a rider on board. 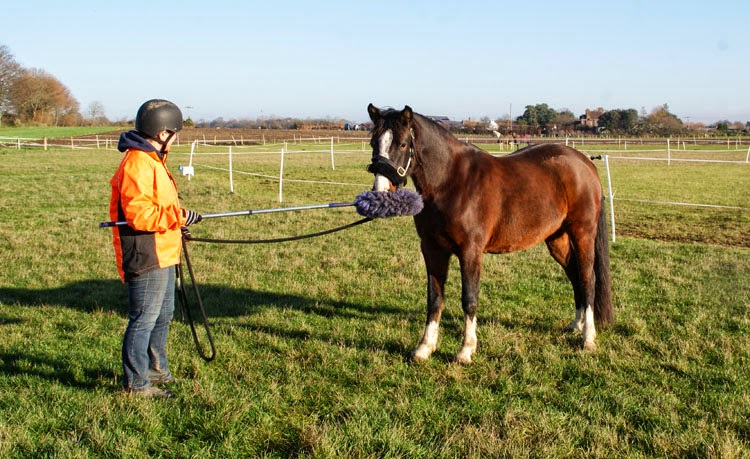 As predicted Beau was pretty apprehensive about the feather duster - not because of the duster end but because of the handle itself moving towards her. This is our cue to slow everything down even more than usual so that she really sees that she can trust us. It's so important not to rush or to force a horse along at a set pace. It always pays off. 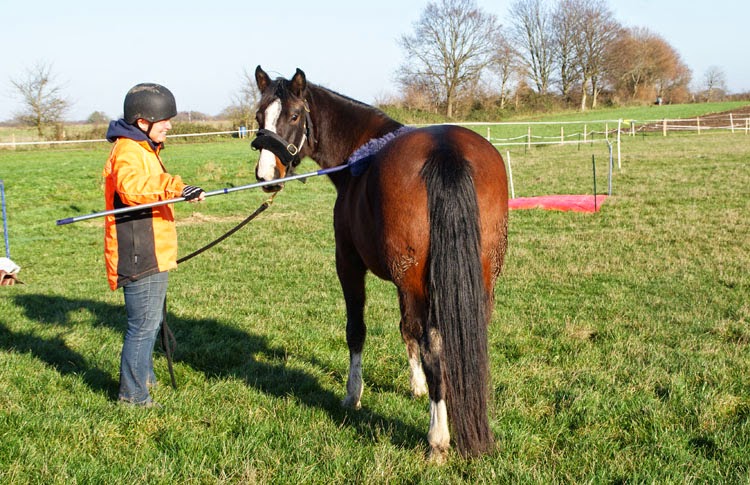 Here Beau is expressing a little ambivalence through a running foot - a clear indication of indecision and that she is having a good old think about this. I can take the pressure off by going back up to 'base camp one' at her bottom rather than setting off resolutely for her fetlock. 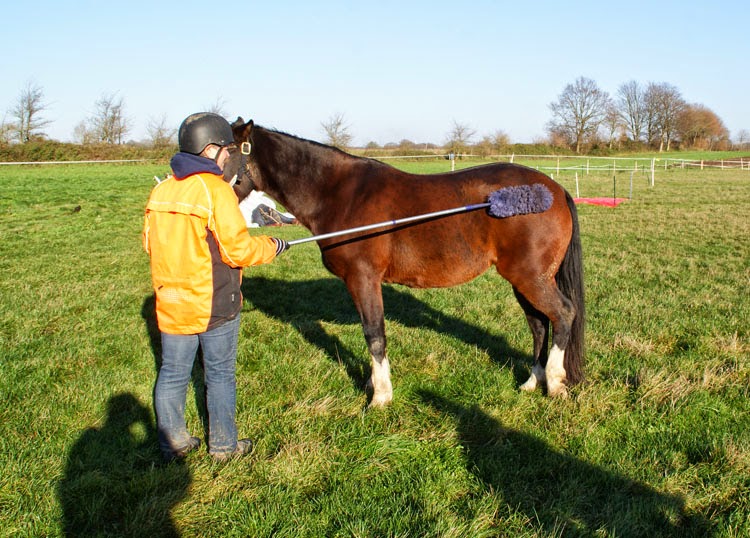 Incidentally Kimberley tells me that she has not been able to touch Beau's back legs at all and the farrier has always struggled with her. 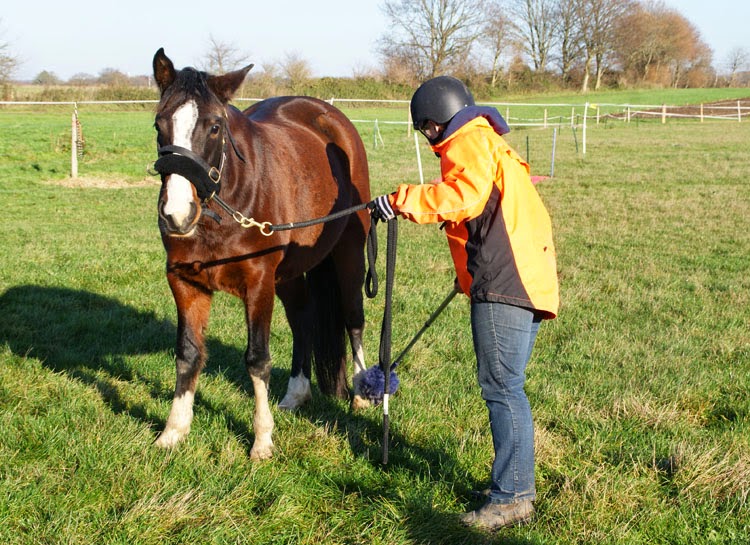 I hand over to Kimberley for the right hand side. I'm impressed with her precision at this critical stage and her great timing. 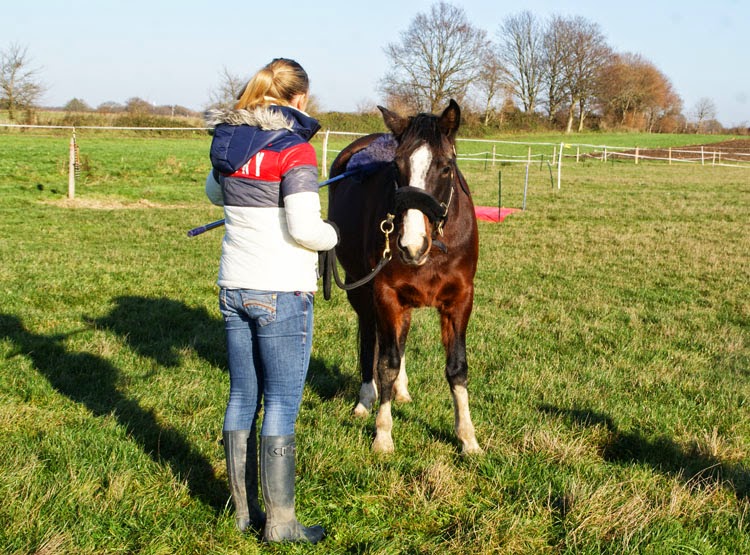 Beau express some disquiet by  slowly kicking at the feather duster but by just holding it in the vicinity and waiting for her to put her foot back down before she takes the feather duster away, Kimberley is able to show her that kicking is not going to work but standing still will. 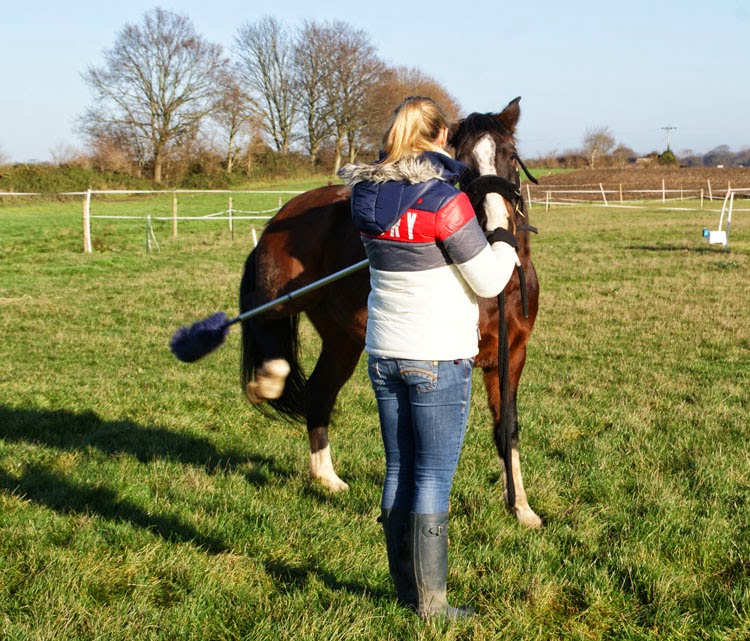 I wanted to see whether Beau would recognise a pattern in the way we were working and accept the plastic bags in a stick in the same calm way as the feather duster. Having a set and precise approach at this stage helps her to accept small changes. 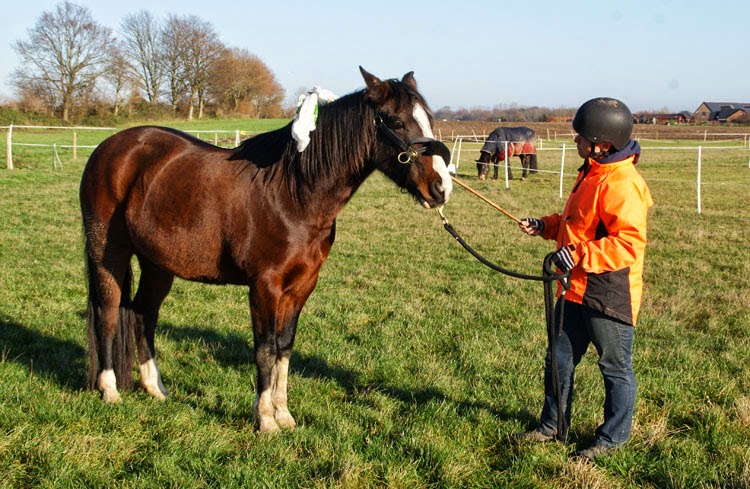 By comparison the umbrella which did not approach her was entirely boring and no, she couldn't really be bothered to chase it. 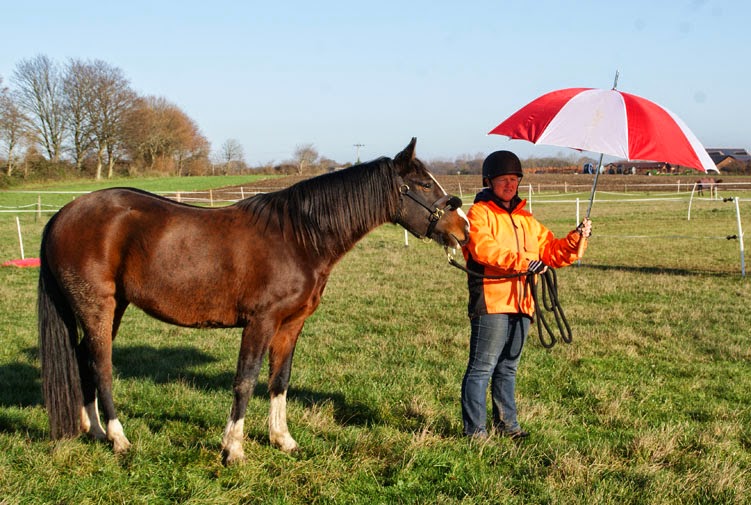 When we started today's session, Beau shied away from the tarpaulin and snorted at it even though it was right over the other side of the paddock. At the end of the session she happily wandered across it as if it was nothing with very little preamble. 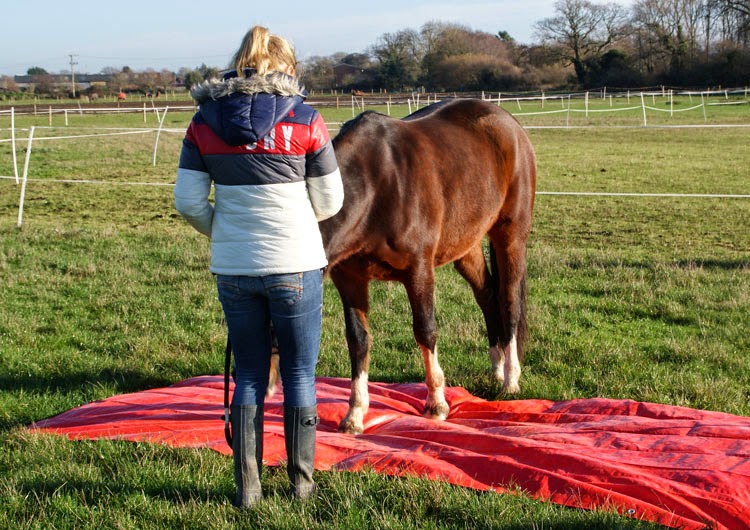