Last night Tracey and I attended at talk organised by Seadown Vets and the NFU on Equine Fire Safety. Just like transport safety this subject has people putting their hands over their ears singing, "La-la-la, this will never happen to me." Although the talk was well attended, it didn't attract anything like the numbers it should have done.

Nicki Whittaker from the NFU explained how last year the insurance company paid out £100 million in respect of fires of which 18.2 million was in respect of stables or agricultural building. That's almost 20%. Fire protection in housing is far better than that in stables which are often in isolated places with no-one on site at night. 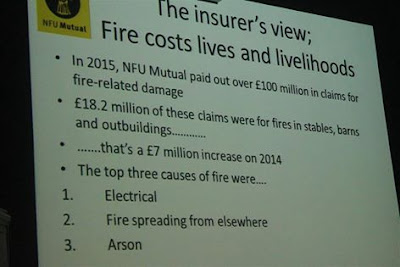 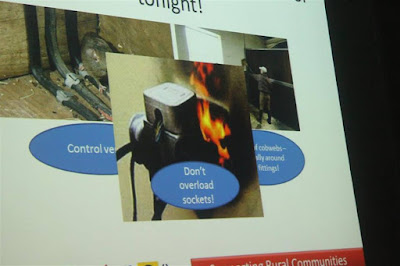 Josh Slater from the Royal Veterinary College pointed out that horses in fires die as a result of the effects of smoke inhalation which not only burns and damages their oesophagus and lungs, but poisons them with highly toxic gases: cyanide from the burning structure and carbon monoxide, making it impossible for them to breathe. Horses, when frightened, raise their heads right into the area where the super-heated smoke made up of dangerous gases is pushing down into the stable. A horse will only recover if it lives long enough to start repairing its own system. 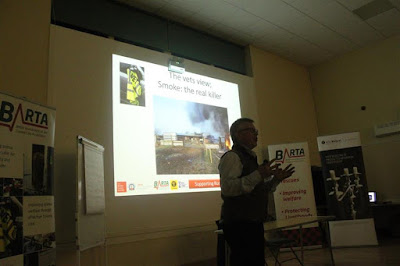 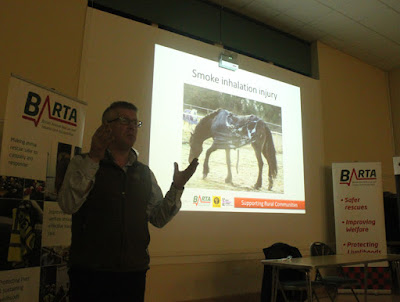 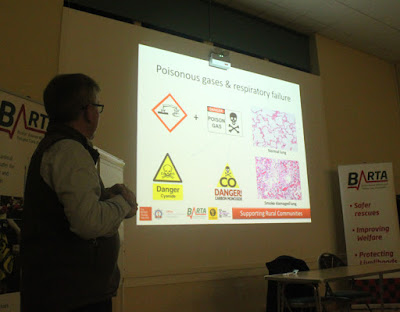 Jim Green from the Hampshire Fire and Rescue Service talked about the precautions that people take, practising their fire evacuations, and making it easier for the Fire Service to get access to the property. The truth is though, that the Fire Service are unlikely to be able to save your horse if there is a fire in his stable because it takes just four minutes to kill him. This was brought home by film footage showing the course of a fire alongside what happens at the Fire Station.

In the first minute or so, the fire takes hold and the stable starts to burn, the roofing felt starts to melt and drips onto the horse and the smoke starts to billow and press down into the stable. At the same time, the retained firefighters are dropping whatever they are doing and running, cycling and driving to the fire station as quickly as they can. Even so, it is five minutes before the fire appliance is on it's way - an amazingly quick time when you think about but by then the horse in the first stable to set alight is likely to be dead. However, the effects of the fire could be limited if people thought to have firewalls between their stables, slowing everything down, and kept their hay stack and muck heaps well away from the stable area. 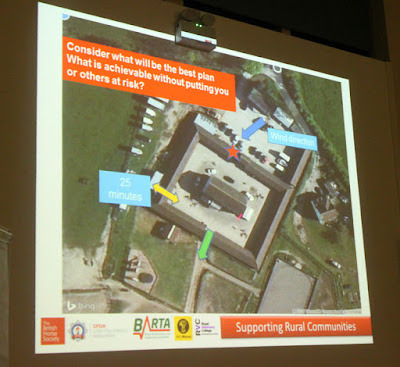 In this set of nice stables, the fire (indicated by a red star) was blown by the prevailing (and therefore predictable) wind, and had progressed through all of the stables on shown on the left hand side of the picture down to the yellow arrow within 25 minutes. Fortunately the owners had been at home, they were able to let most of the horses out, and the horses were accustomed to going through the gap to the fields. Some horses, released during a fire, will go back into their stable because they feel safe there.

I go to a lot of yards with my job and I would venture that most of them have insufficient precautions and procedures in place to prevent a fire spreading. Not just the ones that look like shanty towns, where buildings have been cobbled together, but the posh yards where everything is pretty neat and tidy. There are no fire walls between stables, the hay is stored close to the stables for convenience, and there might be a tractor or a horse box tucked under one end. Even worse are those farms where units are being rented out in the name of diversification where people may be working on engineering projects and have gas bottles, paint, and other chemicals lying around.

It is so difficult for horse owners with rented land and stables to say a word about fire safety without risking being out on their ear. Good livery yards are in short supply and those with good fire precautions are in even shorter supply.

The audience at the talk were treated to an amazing demonstration of early development work on a sprinkler system which is being designed to stop the spread of a fire. This system is being developed by a fire expert who is also a fire fighter. His company is called Equiprotect Ltd.


Brad Wilson who owns the company points out:


"This demonstration is designed to show how quickly a fire develops and how we can effectively extinguish it. In this scenario for speed we used a traditional sprinkler which activates at 68 degrees and deploys quite dramatically.  We are using mist technology in the full system which would last up to 25 minutes in the stable environment. The trailer is also 1/4 the size of a standard stable so the fire looks dramatic in size but in standard box it would not look so big, also the trailer is a sealed box with a flat roof unlike stables which have more natural ventilation and higher roof space so the smoke seen on extinguishment would be far less dramatic, this is purely for demonstration to show how effectively we can achieve the results". BW 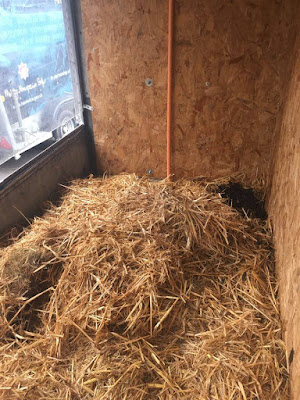 This was the extent of the burn during the demonstration last night.
Posted by Loisaba Wildlife Conservancy at 5:22 PM