Nine month old New Forest colt, Bear, may have a burly stature and a burly name but he does not have a burly temperament. In fact he is extremely nervous of humans. He was born on the Forest, drifted in and then weaned at just three months. He wasn't branded and he didn't go through the sales but his halter breaking seems to have been achieved by being pushed up against a wall and the head collar forced on. As I have said innumerable times this often leads to a foal that is ten times more difficult to put a head collar on than one that has never had one on in the first place. 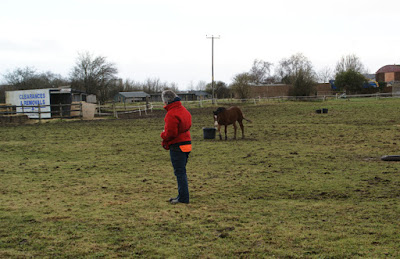 The trouble with semi-feral ponies is that in no time at all legal and welfare requirements come flying at you in the form of needing to microchip or to get feet trimmed sometimes before they are ready. The vet apparently grabbed him and held on to him half way across the field and a trainer, brought in to help, had him running in circles around the round pen. I can't say it enough times Join-Up is not appropriate for semi-feral horses, not even Monty Roberts thinks so. It doesn't work and it can make the pony worse. 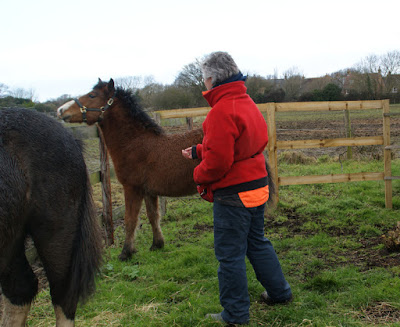 Advance and retreat might be appropriate but only if the area where you are working is secure. As the owner's round pen was round, and also blowing over in the wind, we worked within a small corral but as you can see it isn't very high and the rails are fastened to the outside. Too much pressure, in fact any pressure, and Bear was looking for a way out.

You'll see that I am working with his field mate in the corral and later just outside. When I started clicker training Bear I was able to offer him food over the back of  Jack and around his bottom. That was enough to get him intrigued.He then began to engage with me. 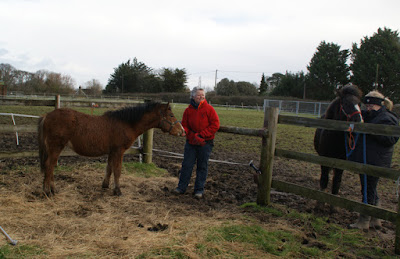 Note I have got a fleece over my more shiny, shushy, jacket so that I don't frighten him with the noise of my coat and so that if he touches me I am warm to the touch. 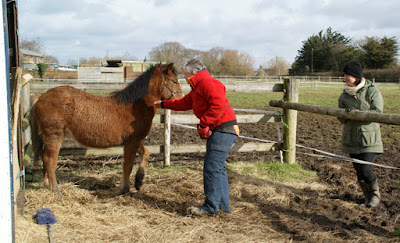 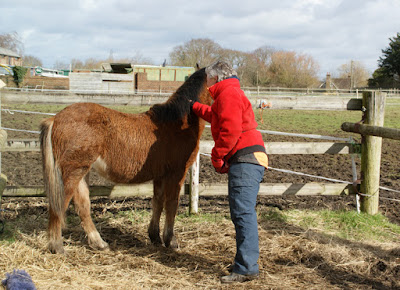 After a while I am able to rub his neck and then all along his back. His owner tells me that he used to like touch. 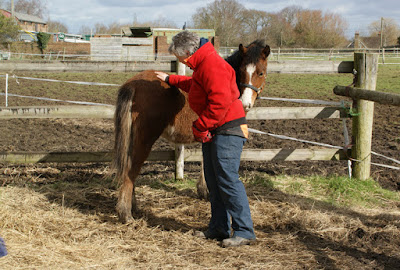 He even lets me pick up his feet. You'll see that he is only prepared to let me in to his right hand side at this stage - his owner says he used to only let her into his left so that's an interesting change. One sidedness is normal with semi-feral ponies and no cause to get their eye-sight checked. 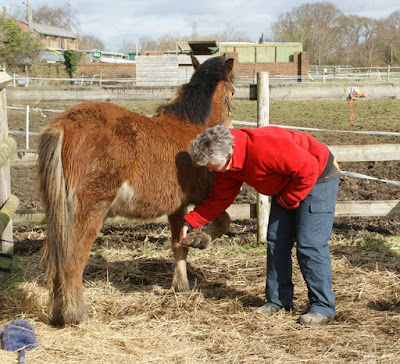 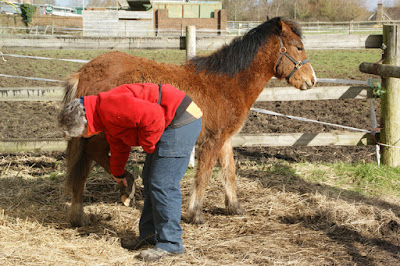 His owner takes over from me and is relieved to be able to touch him again. Now that I have got her started again she can have confidence in her own ability and hopefully get that head collar loosened off pretty soon. This was all achieved in about an hour. 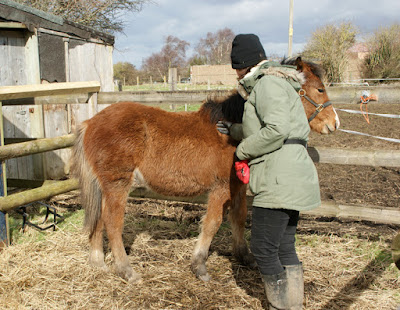 I'm waiting to hear whether Bear is going to come in to me for a few weeks to see if we can make more progress with the right facilities. 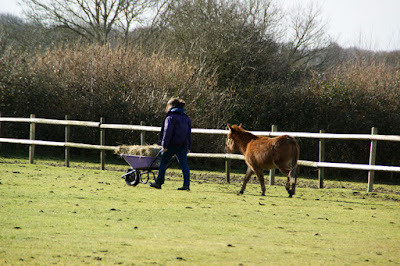 Later, Henry wonders if Tracey needs her eye sight checked. She's behind you!!!
Posted by Loisaba Wildlife Conservancy at 6:14 PM