I'm sometimes left feeling that people think I am being bloody awkward when I insist on certain things such as a soft surface on which to load a horse, or that I won't load a horse into a dodgy lorry or trailer. They are amazed when I get under the vehicle with a bradawl to check that the floor is sound.

I now know of two incidents where horses have reared and gone over backwards when being loaded and both were killed outright. It's a horrible responsibility for a trainer to be involved in that, and the least we can do it minimise the risk, first in working on a soft surface and secondly, trying to work without drama. Only if a horse was 110% about loading would I dare to load a horse off a hard surface.

I am often urged to continue without a suitable surface and I have been cancelled because I have insisted on a soft surface. The trouble is that everyone is your friend until there is an accident.

Indeed I'm contemplating getting even more awkward about which lorries I am prepared to load a horse into. I'm in two minds about whether a horse should ever be loaded into a rear facing 3.5 tonne lorry which has a breast bar since I know that a) a lot of horses seem to hate them and b) that they express their fear by jumping over the breast bar and c) this may well mean a visit from the Fire and Rescue Service. If the vehicle has to stop in the middle of a busy road then the implications go far beyond the horse and the owner.

It was a relief to turn up at my client's today knowing that not only had she secured the use of the school but she had also hired a lorry which has a full bulkhead in front of the horse and no breast partition. The middle partitions are also very high giving the horse his own self-contained space.

Strictly speaking, today's loading was a 'load and go' with no official training element. Nevertheless, I had been told that Leo had a tendency to go part way in, refuse to turn his hindquarters, and then run backwards, something that he was prepared to repeat over and over again. He was last loaded over a year ago and had to be sedated. I was determined that today's experience would be calm and that he would be fully conscious of what was happening to him.

Once again the panels enabled us to work with his yeses and maybes rather than practising his no. I created an L-shape with the panels so that he was inside an enclosed area without having to face the cavern of the horsebox immediately. Then, having established that he too would make an L-shape if asked to load and turn, we closed the panels down so that there was nowhere for him to back out to. He was quietly loaded within 15 minutes although setting up time and taking the panels back down took a lot more time. Worth it to have such a quiet event. He has now gone off to his new load home with a positive memory. 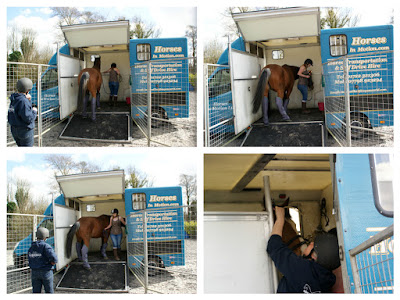 The truth is that people do take risks when loading and travelling their horses which has implications not only for the mental and physical health of the horse but may pose a risk to themselves,  other people and road users. In law there is a duty of care to the public and someone can be sued if the effect of their actions can be proved to be foreseeable.
Posted by Loisaba Wildlife Conservancy at 6:36 PM