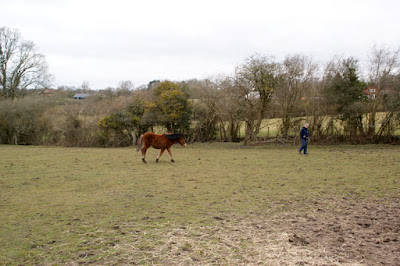 I was somewhat wired all day yesterday having drunk coffee for the first time in my life. How come I didn't know that chilled coffee is wonderful until you need to go to sleep? Fortunately I was able to bring my adrenalin down for my friend Bear who came up to catch me as soon as I arrived. It had already been one of those days, with a friend being carted off to hospital with a suspected broken hip. 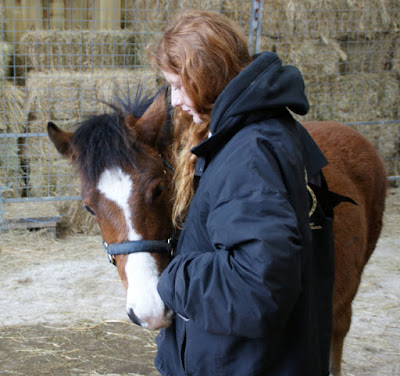 Lou's daughter came along for a visit and asked loads of questions. She's bright, horsey, and extremely pretty so she could have the world at her feet. The IH way of thinking was new to her so it was great to see her working on what Bear needed from her rather than what she might need from him. It was all pretty emotional.

Bear was also caught by a man for the first time since he has been with us, as well as Lou. We worked together on stealing him from one another which he seemed to really enjoy... 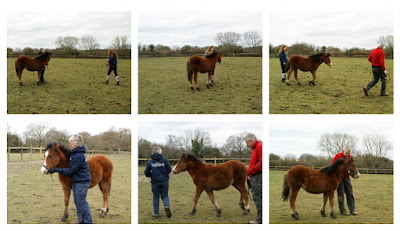 ...and then did it all again in the field. For a pony that has been chased about a lot in the past, both seriously and 'just for fun' it was nice to literally turn this around and have him 'chasing' us to be caught. 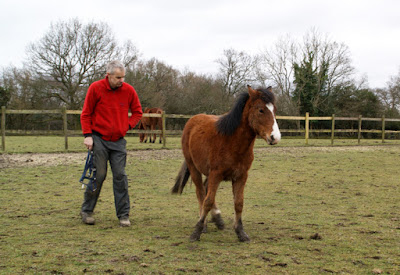 We have got to watch out for this sort of behaviour though. He is turning his bottom on David to demand that David stops and feeds him. There are lots of people who would say that he should know that he mustn't do this but this is the normal, automatic, instinctive, non-thinking behaviour of a foal in the herd. He would get ahead of his mother and back into her to stop her so that he could feed. Rather than moving away it just needs some fairly firm body language to send him away a little to discourage him from doing it.


"thank-you for helping Olivia she was so pleased and has not stopped talking about bit, she said she finds you very interesting and your way of teaching and helping her understand was fantastic." LW

Our next stop was Hale where it was time to see whether Benny remembered and benefited from his donkey training last autumn. With a gap it is difficult to know whether he will be better or worse, is he a goldfish or has he done some latent learning? 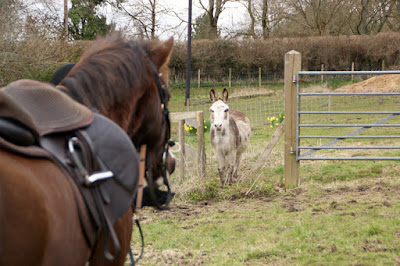 We approached with 6 strides forward and then 4 and 2, with 3 strides back and then 2 and then 1 so that as we got nearer it became slow motion. 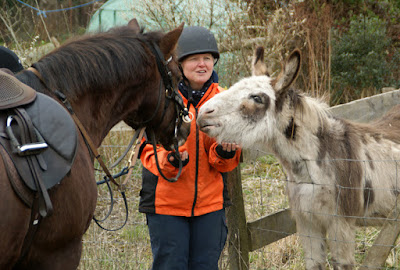 Apparently the Middle East crisis could be solved if the parties sat down to talk and eat together, and so it seemed with Benny and Scruffy. 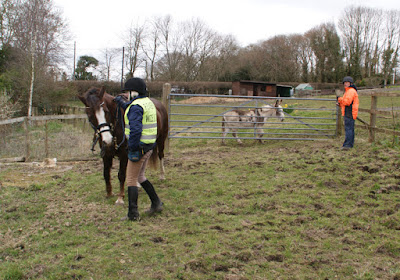 We made sure that we did some of the work in his rear view mirror since most horses seem to worry about things behind them more than things in front of them. I was tempting Scruffy from one end of the gate down to the fence-line and back again so that he would also cross through Benny's blind spot.


"I was thrilled that he was so good (think he was a bit pleased with himself as well)!" DV

Last destination of the day was Kingston Maurwood where there was a packed audience to see Monty Roberts and Kelly Marks in action. Martin Clunes was also there and he took part with two of the horses and worked without ego and with a big smile on his face. 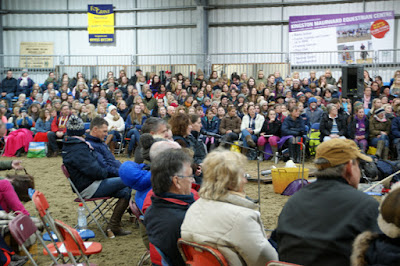 I have always considered my self a Kelly Girl rather than a Monty Girl and I really wish that she would do more demonstrations and clinics. Unfortunately it is men, often with cowboy hats and chaps, that seem to attract the biggest audiences. 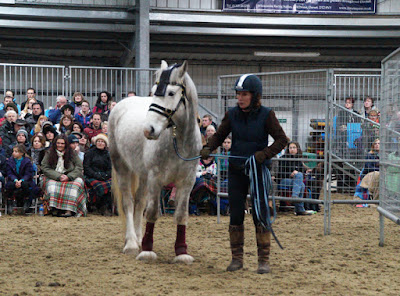 Kelly worked with a non-loader that had taken four hours to load to get to the venue... 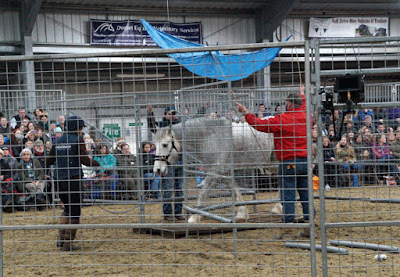 This preparation training worked well with the horse loading in less than a minute at the end of the demo.

Monty worked with an ex-racehorse that would not stand still at the mounting block and had s tendency to go up in the air if she wasn't happy. To see rider Jake Harris sit on her, ask her to stand and back up and get on and off her repeatedly at the mounting block while she stood still was really good to see. 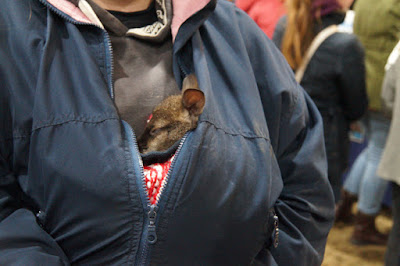 It was hard to choose the best guest what with Doc Martin, my friends the firemen, the two military veteran first aiders, and all the lovely people I know, but I think this one has it. This young wallaby has to be fed every two hours and so has to go everywhere that the lady goes.

The coffee wore off at 3 a.m.
Posted by Loisaba Wildlife Conservancy at 1:40 PM