This lovely little mare is Lottie, registered on her passport simply as Lot 221, who started her life on Dartmoor. Her father was an Appaloosa. I don't know much of her history except that she was branded on her rump and then sold through the sales in Devon. She was bought by a New Forest commoner and was branded again. Later she was put in foal to a coloured stallion, sold, and had a colt last year. Although her son has had a head-collar on and is well handled, Lottie hasn't had a head-collar on since she arrived with her present owner. She came in today having followed a line of carrots into the horse box and hopefully I will be able to tame her using No Fear, No Force techniques over the next couple of weeks. I made a good start this afternoon being able to touch her from end to end with the feather duster. She was clearly worried about her head and I suspect that she has met a halter before, perhaps to tie her up to be branded the second time, and she may be sore in her poll - she certainly has some horrible plaques in her ears and they are bleeding from fly bites. It will be nice to be able to get some soothing cream around the edges of her ears.

For now she has the field shelter and a large section of round pen within the field with my ponies in it. She seems pretty settled. 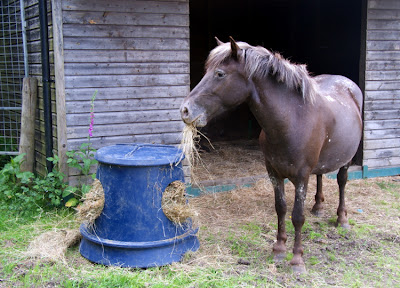 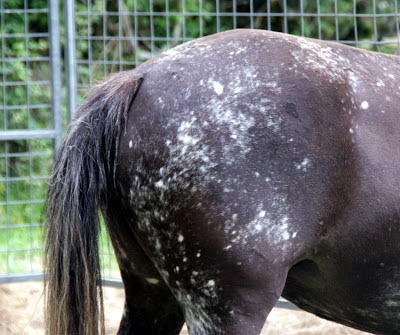