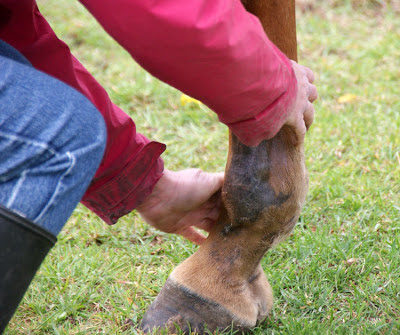 This afternoon's horse has developed a thing about lotions and potions. Unfortunately he has had abscesses in his feet as well as a receding frog and a skin condition around his fetlocks all causing him some discomfort. The treatment for these conditions has also caused him some discomfort and of course it isn't possible to explain to a horse that a course of treatment will make him better in the long run. Accordingly he has been wafting his feet around trying to put people off doing anything with them. Part of the problem is that there has been no distinction between the signal asking him to pick his feet up and the touch required to put on the cream. Today we set about making a clear distinction so that when his feet are simply touched he keeps them DOWN and when he feels a squeeze on his lower leg he picks his foot UP. This worked very well and made the whole thing much more logical for all concerned. I also did some work on his ears where he has become very sensitive about having fly cream put on them, or rather, in them. A good coating of fly cream around the rim of the ear will see of most flies and eventually seep into the ear itself. 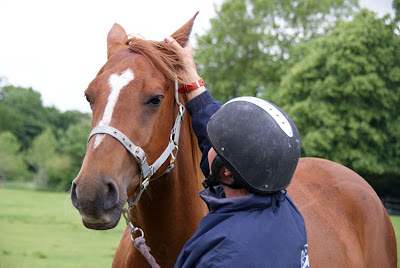 "Many thanks for  your help with Orlando yesterday. Today he has been an absolute star and S did 3 feet by herself and only needed a little help with the last one. Hopefully tomorrow she can do them all." LR

Received 26.6.13: "S is getting on so well with Orlando, doing everything herself now, while I just hold him and give him a click and a treat every so often. D got some latex gloves from the dairy which work wonderfully well in putting his ointment on his legs - it applies so easily without any wastage and no messy hands. Also Orlando is starting to drop his head when we do his ear rotation - we tell him we're winding him up and then unwinding him - very silly but he humours us !"LR
Posted by Loisaba Wildlife Conservancy at 6:33 PM